The impact of Covid-19 on South Africa Political Landscape 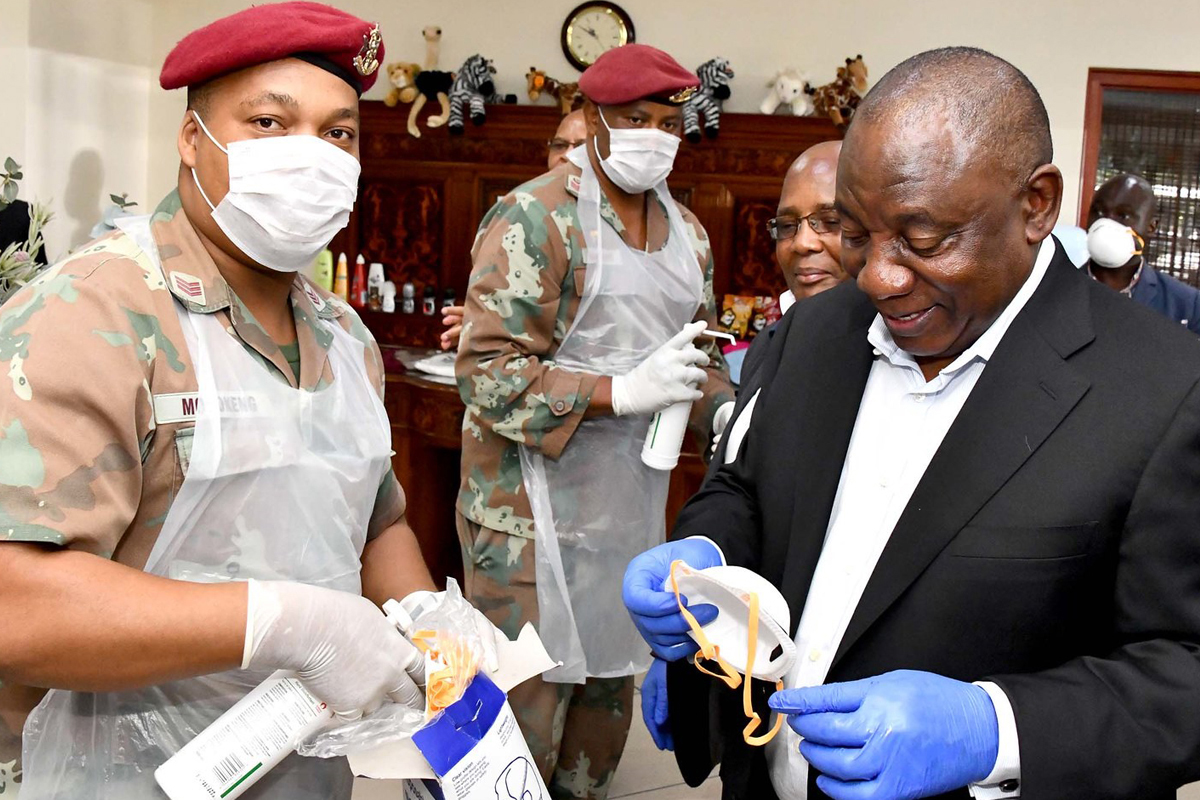 The mountain of complaints which were stacked up against the ANC led government relating to corruption and lack of service delivery in under-resourced communities were quickly flattened due to the strong and decisive leadership shown by President Cyril Ramaphosa during the COVID-19 global pandemic. The visit paid to our shores by the Covid-19 has managed to bring a reprieve, albeit for a moment, to the myriad of social justice issues and inequalities that plague South Africa.

On March 5th, Minister of Health Dr Zweli Mkhize confirmed the spread of COVID-19 to South Africa with the first known patient being a male citizen who tested positive upon his return from Italy. On March 15th, President Cyril Ramaphosa declared a national state of disaster and announced measures such as immediate travel restriction and the closure of schools from March 18th. The first COVID-19 related death was reported on March 27th which was the first gathering clouds of dread and an ushering of a new way of living. The sense of which we were all in this crisis together became clear as partisanship was put on ice and there was a collective moment of solidarity. For years, South Africa has been a country of political disparities, the divide between the ‘left’ and the ‘right’ have been widely reported to highlight the divergent political views held by different political establishments. Somehow in the midst of this global pandemic, South Africans witnessed solidarity and collaboration across party and ideological lines. One may be tempted to speculate that this may be because there was no one to blame for Covid-19, and if there is no ANC to blame, working together with the ANC government became more tolerable.

Leadership in the time of crisis

President Cyril Ramaphosa has shown exemplary leadership which relied on the council of political party leaders and expert knowledge from practitioners in the health sector. The actions and decisions by the President were transparent and collaborative which brought together political parties in all their differences, to show solidarity with the president and the ANC government. It seemed as if the opposition had been muzzled to sleep as the leadership of the ANC got the publicity they so desperately needed. Going into next year’s local government elections ANC leadership repeatedly took to podiums to provide the nation with advice and addressing the fears swirling in townships and suburbia, alike.

Decision making at government level, strengthened by the work of scientists seemed to rally all and sundry to let politicians at the coalface of the coronavirus management shine.  The success of the ANC hinge largely on how they manage the current crisis as this would be a barometer that measures how capable its leadership is in times of distress and aid them in next year’s local government  elections. Before COVID-19, South Africa faced a legitimacy crisis which culminated in near universal calls for constitutional amendments. However, now under a global pandemic, partisan allegiances have been put on a shelve, and in the early stages of COVID-19, President Cyril Ramaphosa’s hardest critics had rallied to his side. The deployment and presence of law enforcement agencies, in communities, to monitor and enforce the lockdown regulations showed the seriousness of government in making sure the country flattens the curve. Furthermore, announcements of the closure of national and provincial borders to limit movement and the relief packages to support the unemployed; aiding businesses and individuals in distress were welcomed with applause.

In addition to lockdown regulations to curb the spread of the coronavirus, interventions by the Department of Human Settlement, Water and Sanitations were among those heralded for their swift response. The interventions by the Department of Human Settlement, Water and Sanitation mainly focused on water services infrastructure to supply water and sanitation. The department has delivered close to 17 000 water storage tanks across the country, and over 1 200 water tanks. Furthermore, the department joined together with Civil Society Organisations in order to resettle residents from dense informal settlements to 27 land parcels which had been identified. Furthermore, in Duncan Village in Buffalo City, the department has constructed 1 174 housing units as part of the broader Duncan Village Integrated Development Program. In the Gauteng Province, the department has delivered units to 72 households on Plot 323 in Wilgespruit, Roodeport, in the City of Johannesburg, this was a result of private sector partnerships which donated units to the provincial and local government. The list of the impeccable work of the ANC led government during this pandemic has been outstanding to say the least.

What we also seen in this time was the emergence of personality politics. Newspaper reports continued to read that the decisive response of President Cyril Ramaphosa and Dr Zweli Mkhize were incredible and seemed to separate them from their relationship to the ANC. The support and congratulations that came were clearly directed to President Cyril Ramaphosa and for a moment, we forgot the failings of the party that he represents. Later on as cracks emerged in some of the issues surrounding the response to the Covid-19 and as they were being met with other issues in the country, the cracks deepened. Of the first to criticise President Ramaphosa was EFF leader Julius Malema who claimed that Ramaphosa was trying to neutralise political parties in order to legitimize lockdown regulations. Malema said he will no longer be participating in President Cyril Ramaphosa’s consultation meetings with other political parties. This show of individual personality politics was also displayed in the debate of the ban on cigarettes. President Cyril Ramaphosa and by extension his Cabinet came under wide criticism in April when he announced that the ban on cigarettes would be lifted, which was later recanted by Cooperative Governance Minister Nkosazana Dlamini-Zuma who emerged as the voice of reason and certainty as it pertained to lockdown regulations. In addition to criticisms from the EFF, the DA was also found to have much to say to the ANC led government. Upon DA leader John Steenhusen’s announcement that the party intended to take action to challenge lockdown regulation, he argued that President Cyril Ramaphosa left many South Africans disappointed and vulnerable when he announced the extension of lockdown in May. On May 14th John Steenhuisen said that “we have to end the national hard lockdown and we have to do it now”. The calls for the end of the hard lockdown by the DA has been based on the calling out of the National Coronavirus Command Councils claiming that it has made irrational decisions and has acted without any checks and balances.

Why did it take a global pandemic to see change?

The citizens of South Africa have for the first time in a long time seen the swift response of the government on issues that previously were considered “complex” and costly with no easy fixes available. This begs the question; why did it take a global health pandemic for the government to start working together to do more? Has South Africa not always been in crisis, as a country with the highest gap between the rich and the poor, as a country with the highest rates of femicide and youth unemployment are these not crisis moments? Perhaps what this shows us is that indeed there has been a lack of will to change the living standards of the most vulnerable among us. The fear that lingers is when things go back to ‘normal’ will we stop seeing this type of exemplary leadership.

The many gaffes in communication and indecision by government officials revealed long-standing cracks in the sudden unity and solidarity which was much needed. Miscommunication resulted in the resurgence of the lack of public trust in government by different sectors of society. The heavy handedness of law enforcement agencies; the glaringly abominable living conditions of many poor citizens not fit for a lockdown; uncertainty around the further extensions of the lockdown period, the ubiquity of scientific views; the forced silence of opposition parties that were itching to not let the ANC gain further ground; the stress under which businesses found themselves in; the lacklustre disbursements processes of the promised grants began to render the lockdown regulations violable. Different sectors together with opposition parties began to challenge the legitimacy of the government’s decisions, viewing them as repressive and irrational. If the national government and by implication the ANC loses several court challenges on the manner it has taken decisions and implemented them in relation to Covid-19 management and interventions, the ruling party may face an uphill battle in convincing, largely the apathetic voter and those that have lost faith in them to support them in the next local government elections. The job losses likely to be brought about the pandemic may partially be blamed on the ANC, as a party that had promised people that it would create more employment. Job losses and the non-creation of additional jobs in the economy may be viewed as non-delivery. The persistence of hesitancy on the part of the ANC could profit the opposition which would expose the weaknesses of the governing party. The widening of the safety net to include those who had previously not benefited could work in the ANC’s favour, in rural areas, as many would perceive it to be somewhat making an effort to provide for the needs of the vulnerable in society.

At the start of the deliberation of what should happen when Covid-19 came on our shores, there was a moment where all political parties came to the table and wanted to ensure that everyone was safe and that the government was doing its best to ensure this. This crisis provided an opportunity for people to come together and attempt to fix the global heath pandemic that was affecting us all. Political party lines were put on ice for the sake of working together which truly speaks to the ANC mantra that “working together we can do more”, surely more was done. This shows that if we continue in this belief, then more can be done far quicker.

The future of South Africa remains unclear; we truly are in unprecedented times that no one could have anticipated. The visitation of the coronavirus on our shores has further exposed some of the deep structural failings in our country and has once again reminded us that there are two South African experiences; one with running water and sanitation, warmth and safety and easy access to medical care, and another South Africa which is under-resourced, vulnerable, locked out and is in desperate need of a government that prioritizes them. Governance in crisis has looked collaborative, transparent and decisive, and it would be a missed opportunity should we go back to ‘business as usual’. Business as usual in South Africa is one that allows youth unemployment to be on the rise, it allows schools in rural areas to not have working sanitation facilities, business as usual in South Africa continues to lock out the poor and vulnerable. The future of South African politics will be put to test after this global pandemic. It is now more than ever necessary and vital to work together so that more can be done for our fellow citizens who have been ignored for too long.

Bonolo Makgale is a Programme Manager of the  Democracy and Civic Engagement Unit Centre For Human Rights, University of Pretoria. She is a social justice activist with an academic interest in Governance, Politics and Democratisation in Africa. She writes for DDP in her personal capacity and her views do not represent those of the organization.