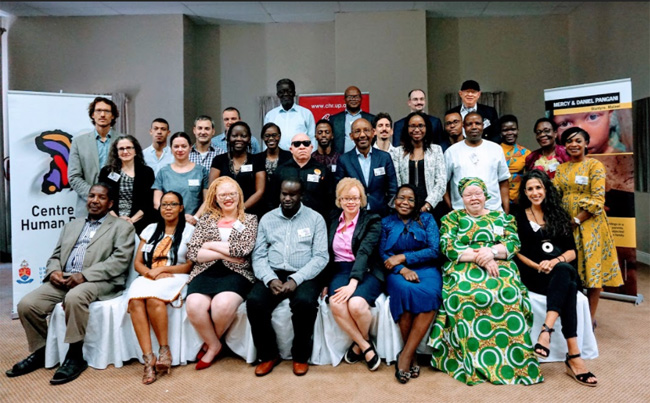 A group of representatives of organizations working on the protection of persons with albinism in Africa convened in Pretoria on Monday 6 November 2017 at the call of the United Nations Independent Expert on the Enjoyment of Human Rights by Persons with Albinism, Ms. Ikpwonosa Ero. Ms. Ero’s mandate as the Independent Expert was created in 2015 by the UN Human Rights Council, to address discrimination and stop the killings of people living with albinism.

The meeting was convened by the Centre for Human Rights with support from the Open Society Foundation (OSF). The purpose of the meeting was to chart the implementation process for the Regional Action Plan on Albinism in Africa (2017-2021) which was crafted in the overall context of the UN Sustainable Development Goals (SDGs) to ensure the full inclusion of all people; “leaving no one behind, starting with the furthest behind.”

The Regional Action Plan is the result of a large-based consultation convened by the UN Independent Expert with UN agencies such as OHCHR, UNESCO, UNICEF and UNDP and the African Committee of Experts on the Rights and Welfare of the Child (ACERWC) and the African Commission on Human and People’s Rights (ACHPR), by which the Regional Action Plan has been endorsed in May 2017.Its main purpose is to curb violations against persons with albinism particularly a violation of their right to life, amid the growing number of killings of persons with albinism in Africa for ritual purposes.

Participants at the meeting included representatives from the World Bank, UN agencies, such UNESCO, UNICEF and IOM; non-governmental organizations, such as KiliSun, Under the Same Sun and Standing Voice and other major civil society stakeholders such as the Open Society Foundations, Human Rights Watch and Amnesty International among others.

Assistant Director of the Centre for Human Rights, Mr Norman Taku, gave a welcome address and in his address remarked that although human rights are commonly known to be nonhierarchical, the reality on the ground is that some groups of people have always been treated like second-class citizens and among this group are persons living with albinism. He underscored the need to increase efforts to ensure that this group of people gets equal treatment and particularly that their lives are preserved.

Ms Ero added that the lack of adequate and accurate data on the violations of persons with albinism is a major issue which is being fueled by the lack of an organized regional strategy to address problems faced by persons living with albinism. As such, she emphasized the need for coordinated efforts within the group in order to increase impact on the ground.
The meeting identified the following challenges (to mention a few):

Overall, the meeting was a huge success as it culminated into the identification of focused areas for collaborations between present stakeholders. The Independent Expert was congratulated for her brilliant work in representing persons with albinism and Open Society Foundation was acknowledged for their continued support of the mandate of the Independent Expert. The Centre for Human Rights was thanked and recognized for being an institution that has practical academic programmes that not only focus on research but also on advocacy around real-life issues.