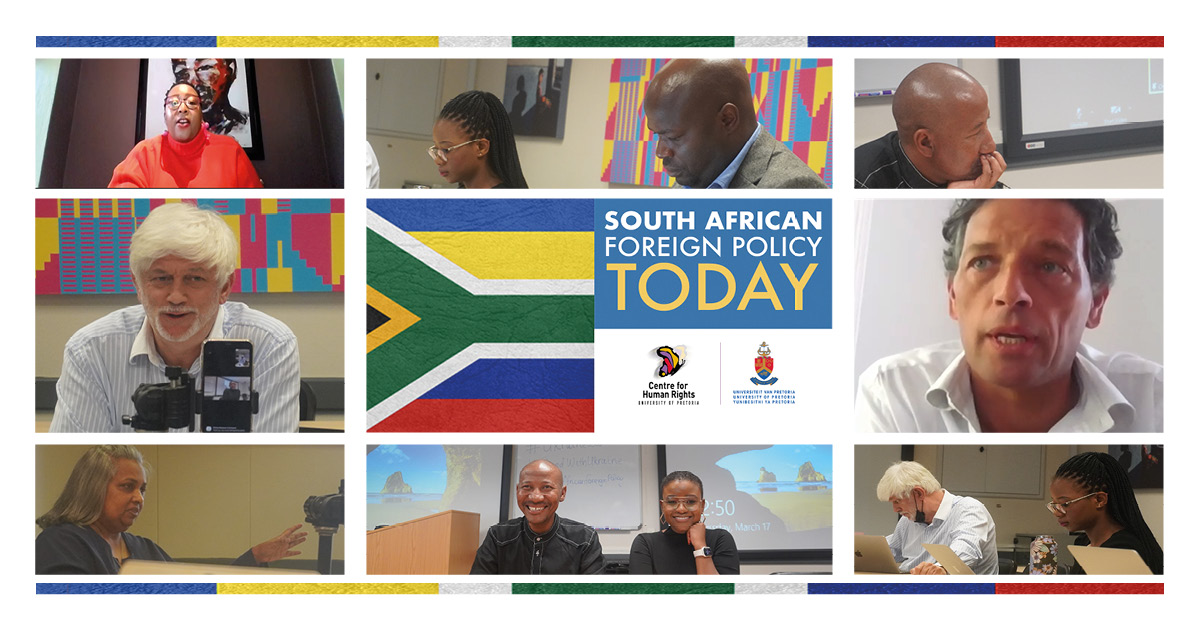 The Centre for Human Rights, in collaboration with the Department of Public Law at the University of Pretoria, held a panel discussion to reflect on South Africa's foreign policy, against the background of the Russian-Ukrainian war. The panel discussion was presented in a hybrid format on 17 March 2022. Panellists agreed that the invasion by Russia of Ukraine was a flagrant violation of international law. However, there were divergent views on the appropriateness of South Africa’s foreign policy position, which tends not to favour unequivocal condemnation of Russia’s actions.

The panel discussion was moderated by Ms Bonolo Makgale, the Programme Manager of the Democracy and Civic Engagement Unit in the Centre for Human Rights. The discussion provided a forum to analyse the seemingly incoherent South African government’s response to the Russian-Ukraine war. Considering South Africa’s post- apartheid political transition to democracy, the foreign policy of South Africa provides the framework, priorities and objectives for how it will interact with other countries. These guidelines are informed by the principles contained in the Department of Foreign Affairs Annual Report of 2003/04, which states that the foreign policy of South Africa should be guided by a commitment to the promotion of human rights, democracy and international peace. However, human rights concerns seem to be trumped by other interests.

On the day before the webinar, 16 March 2022, the International Court of Justice (ICJ) adopted provisional measures ordering Russia to suspend military operations in Ukraine. Professor Frans Viljoen, the Director of the Centre for Human Rights, spoke about the legal significance of these measures. He explained that the decision of the Court is legally binding, according to the United Nations Charter article 94, since states undertake to comply with the decisions of the ICJ. Furthermore, the ICJ Statute in article 41 gives the power to the ICJ to indicate provisional measures that are mandatory in nature and create legal obligations. He noted that inconsistent compliance in the past led the ICJ in 2020 to adopt an internal judicial practice rule aimed at pre-empting a situation of non-compliance by setting out a system of monitoring by the ICJ of its own provisional measures orders. An ad hoc committee of three Judges monitor and make recommendations back to the Court. However, it remains to be seen if this judgment – and the ICJ’s new monitoring mechanisms -- will have any effect on the situation in Ukraine.

Professor Ntombizozuko 'Zozo' Dyani-Mhango, head of the Department of Public Law, University of Pretoria, one of the panellists, shared her reflections on the war, the international criminal consequences of those involved in the war and the role South Africa can play as the war unfolds. Prof Dyani-Mhango identified a silver lining in the dark clouds of war by highlighting the humanity through civilians that opened up their homes to help refugees and how the international community opened up its boarders to assist refugees. In her words: “This shows humanity at its best. It also showed us that one’s dignity and humanity does not cease to exist during the time of war”. She implored that this war would serve as a lesson for all in terms of how to treat refugees. However, she noted that the war still showed the ugly head of racism playing out and could not ignore how African refugees were treated differently. She expressed the hope that the way the international community acted and are still acting in response to the war, will be duplicated in other parts of the world. She also spoke of the uncertainty of the South African policy in response to the Russia- Ukraine war and considered South Africa’s position in BRICS, which means it affords a mutual relationship with Russia. She highlighted the significance of this relationship, which places South Africa in a position to facilitate a negotiated diplomatic solution between Russia and Ukraine.

Prof Dyani-Mhango also considered the role of the International Criminal Court (ICC) in the situation. Neither Russia nor Ukraine has ratified the ICC’s Statute. Although Russia had signed the Statute in 2000, in 2016 it gave notice of its intention ‘not to become a party’, effectively un-signing the Statute. Ukraine signed the Statute in 2000, and is still a signatory. Professor Dyani-Mhango pointed out that Ukraine, as the ‘state on the territory of which the conduct in question occurred’, has accepted the ICC’s jurisdiction under article 12 of the ICC Statute. On this basis, allegations of war crimes and crimes against humanity are being investigated and charges can be brought against those responsible.

Another panellist in the discussion was Professor Dire Tladi, who is professor of international law at the Department of Public Law at the University of Pretoria. He is also a Fellow at the Institute of Comparative and International Law in Africa and is a member of the UN International Law Commission and its Special Rapporteur on Jus Cogens. Professor Dire Tladi reflected on the extent to which South Africa was struggling to balance its interests, obligations, human rights and the rule of law in its foreign policy. He did so against the background of the fact that the invasion of Ukraine clearly is a violation of one of the cornerstones of international law, the prohibition of force. This rule is anchored in article 2(4) of the UN Charter, which states that states must ‘refrain in their international relations from the threat or use of force against the territorial integrity or political independence of any State’. Prof Tladi then considered the various grounds that Russia has offered in justification of its use of force, but found all of them wanting. He also analysed whether or not South Africa needed to revise its foreign policy to ensure that its promotion of human rights domestically also translates to its foreign policy. He argued that, bearing in mind South Africa’s relationship with Russia, it does well in balancing its interests in a manner that still fosters dialogue, as it argued that it would have also preferred an open and transparent process to negotiate the resolution between Russia and Ukraine. In his view, the General Assembly Resolution fell short not so much in what it stated, but in what it left unsaid. In his view, it is problematic that the Resolution singles out Russia, without referring to the broader context of prior conduct in breach of article 2(4) by superpowers, such as the United States. This, he believes, would be the most cogent explanation for South Africa’s abstention on the Resolution.

Professor Eduard Jordaan, from the Department of Political and International Studies from Rhodes University, analysed the implications of South Africa’s soft diplomacy in abstaining from voting on Ukraine in the UN General Assembly Emergency Special Session. He argued that it would be unrealistic to expect South Africa to whole heartedly uphold human rights in its foreign policy. No state consistently follows human rights as the defining element of their foreign policy. However, he argued that the balance was not correctly struck in this particular case. He took issue with South Africa’s reference to what is ongoing as the “situation in Ukraine” rather than calling it a “war”.  He expressed the view that makes as little sense to use the term “situation” in this context as it would be to describe domestic violence as, for example, “the situation with the wife” rather than “domestic violence”.

The panel discussion concluded by a question and answer session. Ambassador Jan Mutton contributed by stating that although mediation is embedded in South Africa’s defence in how it behaves in the international space, upon analysing South Africa’s voting behaviour in the United Nations Security Council in recent years and in the case of the Russia-Ukraine war and what it means for foreign policy, there seems to be a deviation from upholding human rights principles in its foreign policy. He pointed out that as a member of the UN Human Rights Council, South Africa voted to protect oppressive regimes for example by abstaining from country-specific resolutions. He also questioned the lack of consistency, since President Putin’s actions suggest a “regime change” agenda, which South Africa on many occasions has vehemently opposed.

Mr Clayson Monyela, South Africa's Head of Public Diplomacy from the Department of International Relations and Cooperation, was also present and explained the impartial role South Africa is playing in ensuring that there is mediation and dialogue between Russia and Ukraine, while it balances its international interests in line with human rights principles.

Ms. Bonolo Makgale concluded the discussion by pointing out the growing Russian-Africa relationship. The courtship of African leaders has quietly intensified in the past few years. While Chinese diplomatic and economic presence in Africa has garnered the most attention, Russia has been steadily providing broad military and intelligence support for African countries. A recent study by three Russian scholars concluded[1] that bilateral relations with Egypt, Algeria and Morocco “have increased at both political and economic levels recently”. She asked the question: “What's the strategic thinking behind Russia's securitisation and military presence and expansion on the African continent?”