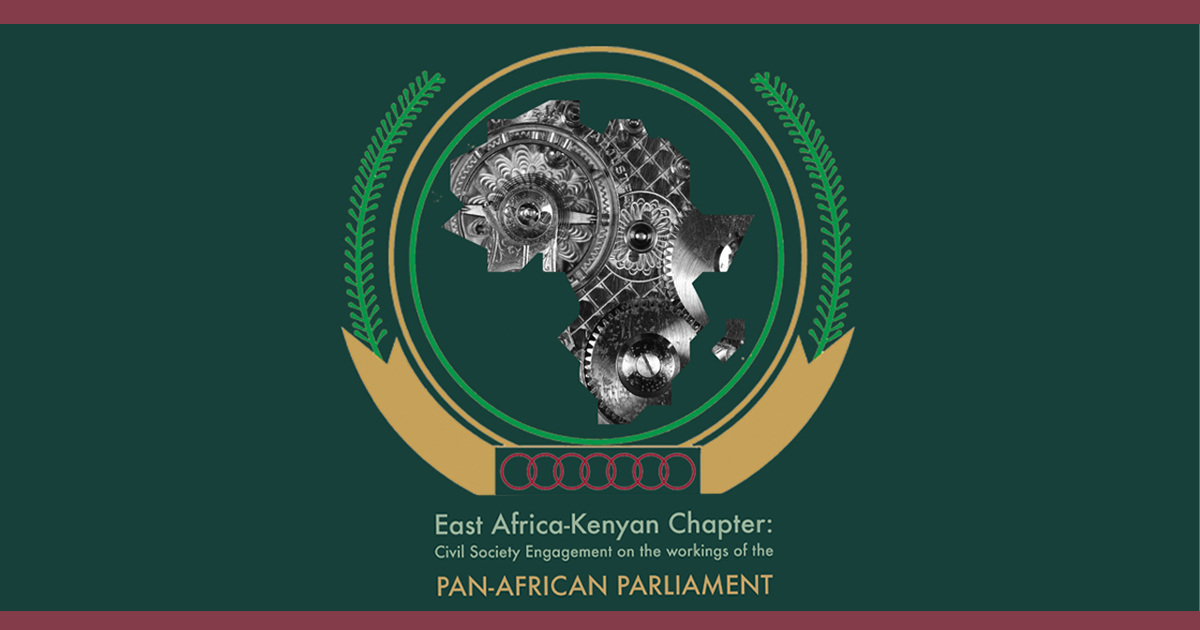 The Democracy and Civic Engagement Unit at the Centre for Human Rights, University of Pretoria, cordially invites you to the East Africa-Kenyan Chapter - Civil Society Engagement on the working of the Pan-African Parliament to be held from 25 - 26 April 2022.

Public participation is regarded as one of the most important components of democracy. This democratic ideal speaks to fostering citizen involvement in and understanding of decision-making processes that affect them. Public participation is linked with other democratic ideals such as representation, transparency, and accountability. Civil Society Organisations (CSOs) are one of the vehicles that citizens have used to form a collective voice to influence decision-making and address issues that affect them. On the continent, CSOs are important in amplifying the citizen voice through the various issues they address. CSOs provide a platform and access for various groups to have their needs and interests represented. CSOs also provide a platform for expression, pursuit, and protection of varied interests of the specific groups they represent. CSOs play a critical role in democratic consolidation on the continent through the oversight role of holding governments accountable and lobbying for transparency, promotion, and protection of human rights, and the consolidation of democratic ideals towards ensuring good governance in Africa.

About the Pan African Parliament

The Pan-African Parliament (PAP) was established as the legislative arm of Africa's supranational Union with consultative and advisory powers. The aim was to ensure inclusiveness, through the creation of a platform to mainstream Africans voices to fully participate in decision-making processes on matters affecting the continent in all spheres of life, including human rights, rule of law, good governance, democracy, peace, and security, integration, and development. The Parliament currently represents all AU member states, except for Eritrea. The Parliament has its seat in Midrand, South Africa, and consists of representatives nominated by local legislatures of member states.

While the PAP Protocol makes provisions for African citizenry participation and the PAP have taken strides towards implementing this, the absence of a normative framework and established formal mechanism of engagement with civil society is concerning. Despite its potentially crucial role in PAP’s activities, civil society still knows very little about this institution. For most CSOs, the PAP, and the AU in general, are largely invisible, and too distant to access or influence with their advocacy.

About the PAP Civil Society Forum

Mzalendo (‘Patriot’ in Swahili) Trust is a Kenyan non-partisan Parliamentary Monitoring Organization started in 2005 and whose mission is to ‘keep an eye on the Kenyan parliament.’ Through information sharing, research and networking, we promote greater public voice and enhance public participation in politics by providing relevant information about the National Assembly and Senate's activities. Our vision is to see informed, empowered, and engaged citizens transforming society by holding their leaders to account.

To enhance public participation in legislative development, Mzalendo has robust offline and online platforms that allow citizens to air their voices and views on various legislations under active consideration. Through our online Dokeza (Swahili for sharing your views/ideas) platform, we facilitate online public participation in refining various legislations. Therein, members of the public can access bills, read and share their views  which we, in turn, collate and present on their behalf to the relevant House of Parliament (Senate or National Assembly).

In addition, Mzalendo Trust and cognizant of the important role played by civil society organizations, Mzalendo convenes various networks and collaboration initiatives to facilitate engagement in the legislative process. Key among this is the Civil Society Parliamentary Engagement Network (CSPEN), a network of about 28 organizations with an interest in working in parliament.  In addition, they are also the Convenors of the CSO partners within the Open Government Partnership framework and the lead for the Public Participation and Legislative Openness Commitment as articulated in the 4th National Action Plan currently under implementation.

Leveraging on this joint experience,  CHR and Mzalendo Trust in partnership with PNAfrica are  hosting  a CSO forum in Nairobi, Kenya on 25-26 April 2022.  The meeting will bring together 30 participants drawn from civil society organizations under the CSPEN and OGP umbrellas, Media Organizations, academia and Parliamentary Representatives.

The meeting seeks to achieve the following objectives:

The importance of transparency and accountability in the operations of the domestic and regional parliament: Role of Civil Society in Enhancing Legislative Openness.

CSOs play an important independent role in technical analysis and advocacy vis-avis Parliaments on their specialty areas of focus. They also help aggregate and represent the views of their constituencies. CSOs influence public policy in openness, transparency, and accountability as they operate on different themes with diverse tools to amplify their voice and advocacy on legislative issues. Mzalendo Trust, for instance, continues to convene and facilitate the work of the CSPEN as the key platform for outreach and coordination of Kenyan CSOs on Parliamentary affairs. CSOs, therefore, have remained key players in improving Kenya’s and Africa’s public consultation around legislative issues.

Equality Now, founded in 1992, is an international human rights organization that works to achieve legal and systemic change that addresses violence and discrimination against women and girls around the world, with a focus on ending sexual violence, harmful practices, sexual exploitation, and achieving legal equality. Combining grassroots activism with international, regional and national legal advocacy, Equality Now’s approach links high-level policy advocacy and global activism with support and legal advice to grassroots partners and networks working on specific cases of women and girls in order to promote change at all levels.

Equality Now is also a founding member and the Secretariat of the Solidarity for African Women’s Rights (SOAWR) Coalition. Founded in 2004, SOAWR is a regional network of 63 national, regional, and international civil society organisations based in over 30 African countries. The primary area of focus for SOAWR has been advocacy for African States to urgently ratify, domesticate and implement the Protocol to the African Charter on Human and Peoples' Rights on the Rights of Women in Africa (the Maputo Protocol).

This session seeks to discuss transparency and accountability in the operations of the domestic and regional parliament, which will eventually -

Business and Human Rights & the Rights of Girls

Accountability for Investment: The role of the State to protect the citizens.

In contemporary times, corporations are covering significant ground in the area of investment for development in Africa. Governments’ actions aimed at economic recovery post the COVID 19 pandemic are increasing reliance on corporations/private entities to significantly invest in, among others, sectors that deliver public services. However, this is providing mileage to corporations to influence national legislation, particularly the review of laws and policies to ensure profit and shield them from costs of upholding human rights wherever they invest. This entrenches corporate capture and by extension, deters the application of safeguard policies of their international financiers that would protect the rights of persons affected by the investment/development projects. A move to review and harmonize legislation for investment is pertinent for corporate accountability in the region. As civil society actors, we look to the Pan African Parliament to;

CSO actors have significantly underexplored the Pan African Parliament, as a site for influencing the ratification, domestication, implementation, and reporting on the Maputo Protocol. The lack of CSO engagement with the PAP may be partly attributed to the lack of awareness of the mandate of the PAP in advancing the rights of women on the Continent. The Constitutive Act of the PAP provides for an explicit human rights mandate. Article 3(2) of the PAP Protocol provides that one of the objectives of PAP is to “promote the principles of human rights and democracy in Africa”. Article 11 of the PAP Protocol further provides that “matters pertaining to respect of human rights” are one of the issues that the PAP should examine and discuss as part of its core functions and powers.

Due to the broad nature of its powers and functions relating to the promotion of human rights, the PAP is uniquely positioned to provide a platform to mobilize citizen participation in the affairs of the African Union and promote the ratification, domestication, implementation and reporting on the Maputo Protocol.

The Civil Society Forum will be conducted through interactive plenary sessions, in which civil society will make technical presentations on various topics. Participants will have an opportunity to engage with the various topics and formulate observations, comments, and recommendations. The working language will be English.