Pretoria-Marburg Queer Conversations kicks off with a discussion on ‘Queering Coming Out: Nuances Among Queer Individuals in South Africa’ 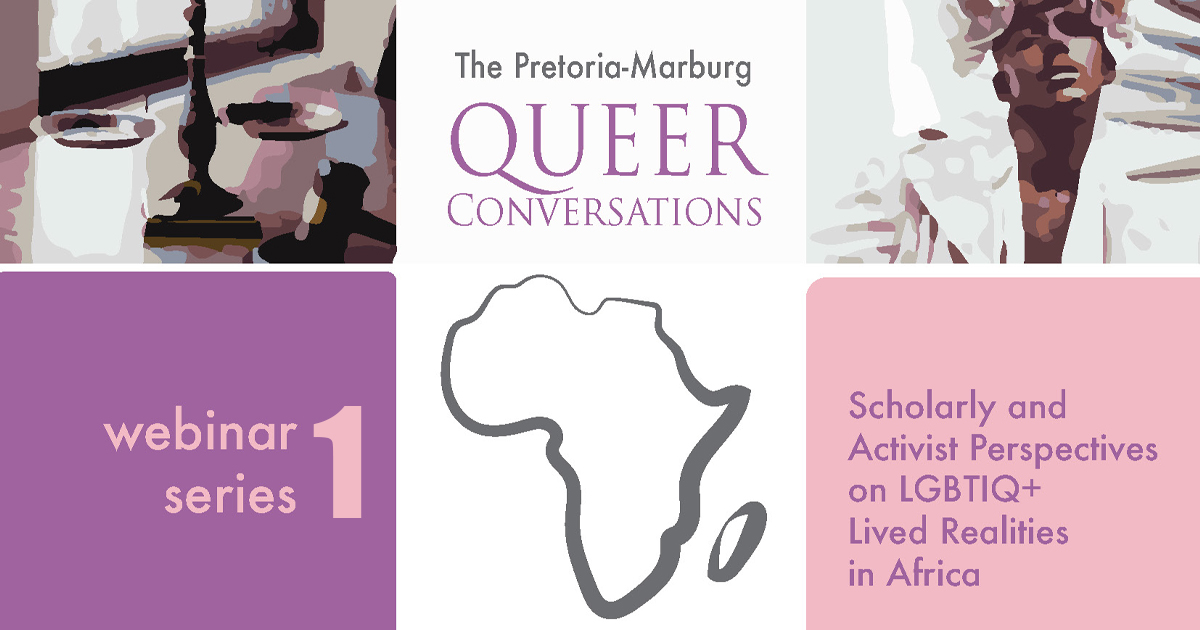 On 21 April 2022, the Centre for Sexualities, AIDS, and Gender (CSA&G) at the University Pretoria, facilitated the first webinar in the Pretoria-Marburg Queer Conversations: Scholarly and Activist Perspectives on LGBTIQ+ Lived Realities in Africa  in collaboration with the Centre for Human Rights (CHR) and the Center for Conflict Studies (CCS) as well as the Center for Gender Studies and Feminist Futures (CGS), Philipps-University of Marburg. The Pretoria- Marburg Queer Conversations creates a monthly space for in-depth discussions designed to tap into the intersections of knowledge-production and transfer between diverse scholarly and activist spheres and contributes to methodological, conceptual, and normative aspects of centering LGBTIQ+ rights and lived realities in African contexts.

In the first edition of the series, Dr Justice Medzani and Naledi Mpanza, both from CSA&G, facilitated a discussion titled ‘Queering Coming Out: Nuances Among Queer Individuals in South Africa’. The speaker for this discussion, Ms Zuziwe Khuzwayo is a feminist scholar whose work focuses on documenting the experiences of womxn in all its multiplicity/duplicity from the workplace to their sexual identity. She has published in Agenda, Journal of International Women’s Studies, the South African Review of Sociology and Frontiers in Sociology. Her doctoral research looks at how bisexual women living in Johannesburg construct their sexual identity focusing on factors such as race, class, space and age.

During the course of the discussion, Zuziwe expanded on how coming out has proven to be a critical process in the Global North for non-heterosexual individuals in shaping their identity. Bisexual self-identifying individuals find this process to be even more challenging because bisexuality continues to be misunderstood as a transitory phase from which individuals would develop into heterosexuality or homosexuality, rather than a permanent identity. Because of the stigma surrounding the sexual identity which is a result of misunderstandings and the negative connotation of bisexuality, some individuals choose not to perform the act of coming out. Coming out as an act of claiming non-heterosexuality personally and publicly allows individuals to not only gain social acceptance but also integrate into their communities.

Zuziwe reflected on pre-colonial Africa and how the existence of non-heterosexual identities has been questioned due to a lack of documentation. Historically, there has been a strong misbelief in heterosexuality being the only sexual identity that has ever existed in Africa. This belief is heavily influenced by colonialism, which introduced a heteronormative view of sexual orientation, as well as patriarchal classifications based on Christian ideology. Despite lack of archived documentation, bisexual romantic behaviour has persisted on the continent before and during colonialism as shown in Uganda where women have been in romantic relationships with each other for many years without necessarily performing coming out.

In her research, Zuziwe explores the experiences of South African women who self-identify as bisexual. Some of the findings from the study have shown the different perspectives on coming out. While some women viewed it positively, other women feel that it is no longer a necessity to perform the act. For many older bisexual women who participated in the study, the act of coming out continues to be an important political act that allows them to choose self-disclosure and own their sexual identity. Zuziwe also noted that coming out allows bisexual individuals to challenge the erasure and delegitimisation of their sexual identity and provides the opportunity to increase the visibility of bisexuality.

The Pretoria-Marburg Queer Conversations continues on 19 May 2022. Register for the following event webinars below.