Pretoria-Marburg Queer Conversations continues with a discussion on ‘Threats to Human Rights for LGBTIQ+ Communities: Hate Crimes and Conversion Therapy’ 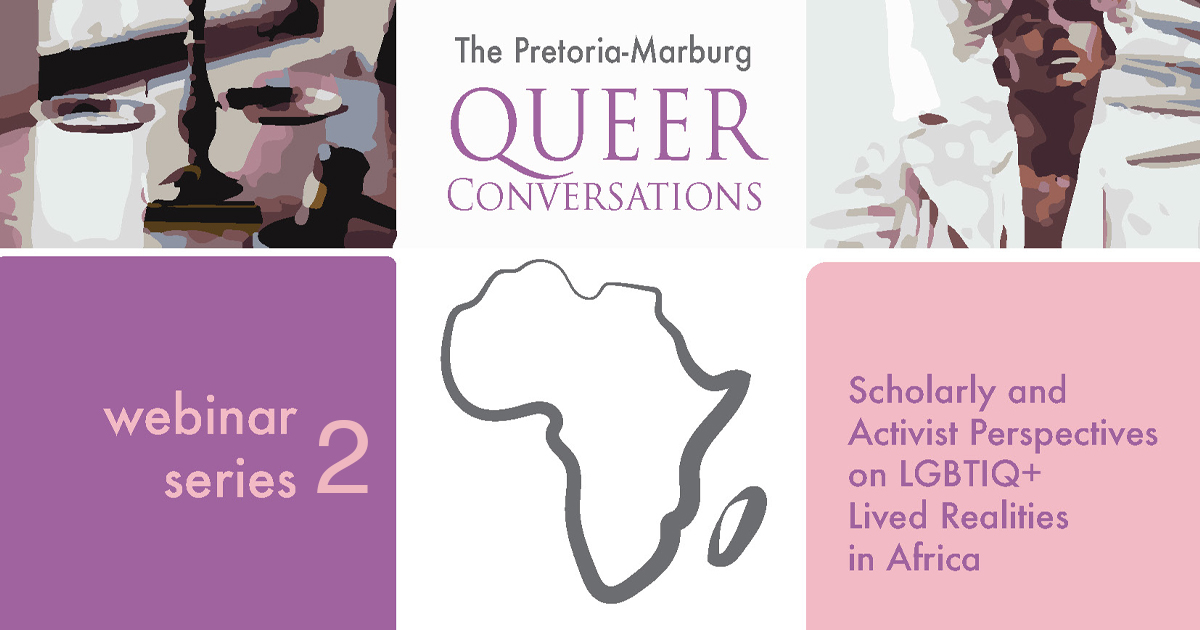 Following the success of the first edition of the series, the 2022 Pretoria-Marburg Queer Conversations continues with a discussion on ‘Threats to Human Rights for LGBTIQ+ Communities: Hate Crimes and Conversion Therapy’.

On 19 May 2022, the Centre for Human Rights (CHR) at the University of Pretoria, facilitated the second webinar in the Pretoria-Marburg Queer Conversations: Scholarly and Activist Perspectives on LGBTIQ+ Lived Realities in Africa. The Pretoria- Marburg Queer Conversations creates a monthly space for in-depth discussions designed to explore the intersections of knowledge-production and transfer between diverse scholarly and activist spheres and contributes to methodological, conceptual, and normative aspects of centring LGBTIQ+ rights and lived realities in African contexts.

In the second event, Thiruna Naidoo from SOGIESC unit of the Centre for Human Rights facilitated the discussion titled ‘Threats to Human Rights for LGBTIQ+ Communities: Hate Crimes and Conversion Therapy’. The first panelist for this discussion, Ms Khanyo Farisé is Outright Action International’s African advocacy officer. The second panelist was Professor Anton Kok from the Department of Jurisprudence at the University of Pretoria.

During the first part of the discussion, Khanyo looked into the different forms of conversion practices also referred to as sexual orientation, gender identity, and expression change efforts (SOGIE CE). These practices to “cure” or to “repair” LGBTIQ+ individuals to their presumed heterosexuality, increase in intensity from the moment of discovery and are often perpetuated over a long period of time. Conversion ‘therapy’ usually ends when the victims confirm that they are heterosexual and/or cisgender. Several respondents in her research also noted that several forms of conversion practices are combined to suppress non-heterosexual identities. They begin with talk therapy and gradually escalate to physical violence. Despite the negative impact on LGBTIQ+ lives, these forms of harmful conversion practices continues to be prevalent in Africa. According to her research, religious leaders and mental health practitioners are the main perpetrators of conversion practices, while family members are considered the initiators.

The discussion continued as Professor Kok explored the Promotion of Equality and Prevention of Unfair Discrimination Act which is a South African anti-discrimination law that prohibits hate speech and harassment. Even though gender, sex, and sexual orientation are among the grounds for which discrimination in the Act is prohibited, gender identity and gender expression are not mentioned explicitly. Kok then proceeded to discuss the definition of harassment in the Equality Act, according to which many cases of conversion therapy could be considered harassment. Since the term “hurtful” has been eliminated from the definition of hate speech, claims such as hurt feelings and infringement of human dignity can only be brought before an ordinary court. The currently pending Prevention and Combating of Hate Crimes and Hate Speech Bill would provide sexual and gender minorities with the hope that they could prove prejudice and intolerance for it to be a hate crime, as grounds such as gender identity and intersex are listed in the Act.

While Africa has made some progress in advancing human rights, further measures need to be taken to protect the rights of marginalised groups. Key actors, human rights defenders, scholars and private citizens should actively advocate and work together to eradicate conversion practices and hate speech. Documenting human rights violations that have been perpetrated is crucial to raise awareness of the harm that these practices have on LGBTIQ+ individuals.

The Pretoria-Marburg Queer Conversations resumes on 9 June 2022 on the colonial legacies of anti-LGBTIQ+ rights in Africa states coordinated by the Center for Gender Studies and Feminist Futures (CGS) and the Center for Conflict Studies (CCS) at the Philipps-University Marburg. Register for the following event webinars below.