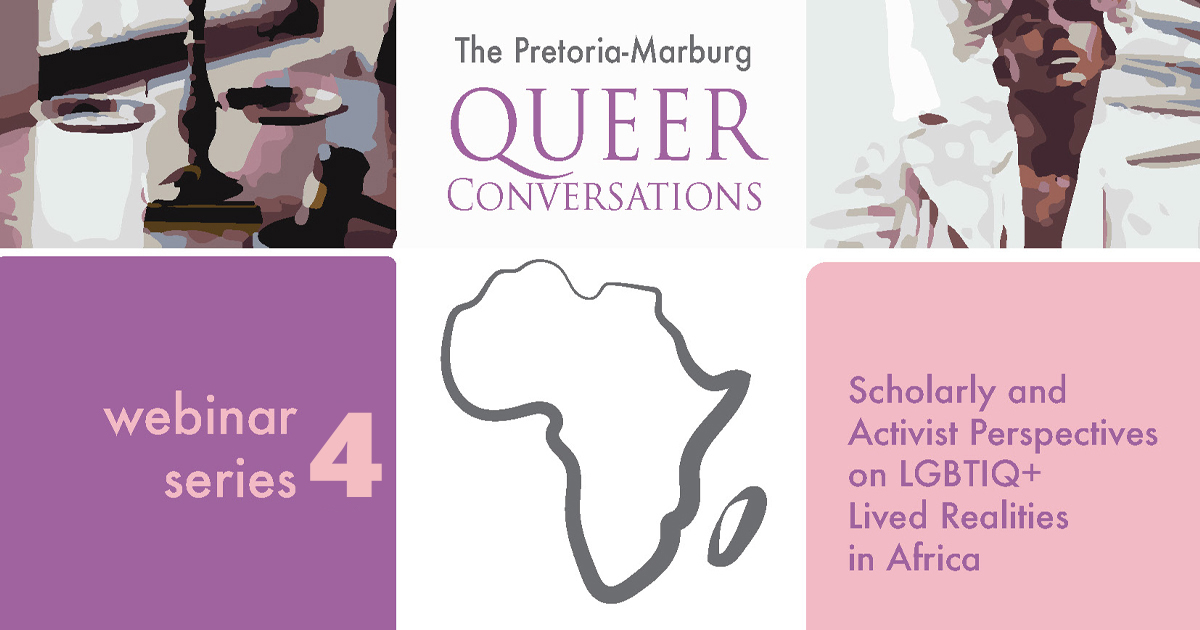 The fourth of six-event series in the Pretoria-Marburg Queer Conversations: Scholarly and Activist Perspectives on LGBTIQ+ Lived Realities in Africa was held on 7 July 2022. The Centre for Sexualities, AIDS, and Gender (CSA&G) at the University Pretoria facilitated the webinar session in collaboration with the Center for Gender Studies and Feminist Futures (CGS) and the Centre for Conflict Studies (CCS) at the University of Marburg and the Centre for Human Rights (CHR) at the University of Pretoria. The Pretoria- Marburg Queer Conversations creates a monthly space for in-depth discussions designed to tap into the intersections of knowledge-production and transfer between diverse scholarly and activist spheres and contributes to methodological, conceptual, and normative aspects of centering LGBTIQ+ rights and lived realities in African contexts.

Dr Justice Medzani and Naledi Mpanza from CSA&G facilitated a discussion titled ‘Theorising Violence and Abuse Within LGBTIQ+ Relationships’. The speaker for this discussion is Dr Nelson Muparamoto from the Department of Demography, Settlement and Development of the University of Zimbabwe. Dr Muparamoto works closely with marginalised communities in Zimbabwe and is a diversity and social inclusion analyst who has experience in conducting ethnographic studies, documenting impact stories, baseline surveys, mid-term and end-of-term evaluations. He enjoys working on key populations health and wellbeing as well as on gender and sexuality diversity.

Throughout the discussion, Dr Muparamoto explored intimate partner violence (IPV) among gender and sexuality diverse (GSD) partners in Zimbabwe, an issue that has not received the same attention compared to abuse within heterosexual arrangements. The deeply rooted assumptions of masculinity and femininity have contributed to a heterosexist model of abuse, that depicts men as perpetrators and women as passive victims. Due to the lack of IPV theories in GSD relationships, the abuse experienced by LGBTIQ+ individuals are often addressed within the heterosexual framework. Approaching gender through the lens of masculinities and femininities deconstructs the binary understanding of gender and assumes a more fluid understanding by arguing that individuals may embody both masculinities and femininities to a varying degree. This more fluid approach to gender is necessary to theorise IPV in GSD relationships.

Dr Muparamoto pointed out the normalisation of violence in LGBTIQ+ relationships. The findings from a study he conducted in Zimbabwe a decade ago pointed to such normalization by participants who reported their partners’ controlling behavior and beatings. However, he noted that the limited recognition of GSD relationships results in the absence of structures of recourse in the event of abuse, which discourages LGBTIQ+ individuals from addressing IPV further. Additionally, he argued that the current work on IPV in LGBTIQ+ relationships in the African context is very limited and demands greater attention.

The Pretoria Marburg Queer Conversations continues with its fifth webinar session on 11 August 2022 organised by the Centre for Human Rights (CHG) at the University of Pretoria on the topic of “Queering Perspectives on Power Dynamics: Advocacy and the Intersections of Class, Gender, and Race in the Realisation of LGBTIQ+ Rights in Africa”. Register for the following event webinars below.