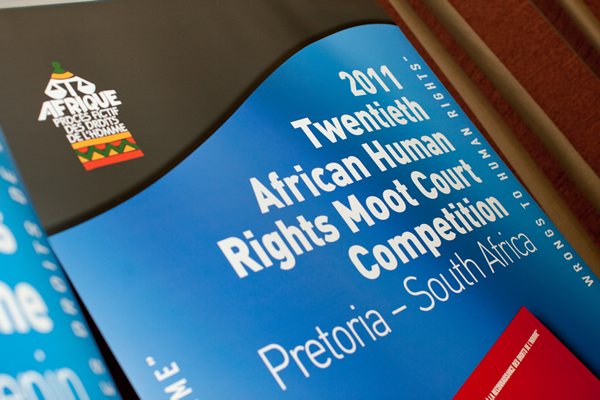 This year marks the 30th anniversary of the African Charter on Human and Peoples’ Rights, and what has Africa got to show for it? This is a question that will be addressed by Judge Abdulqawi Yusuf of the International Court of Justice and Advocate Reine Alapini Gansou, Chairperson of the African Commission, at the 20th African Moot Court Competition and Conference from 7 - 12 July 2011 in Pretoria.

They will be joined by various experts and 4 other members of the African Commission, including South Africa’s Advocate Pansy Tlakula, who is also the Commission’s Special Rapporteur on Freedom of Expression.

On Monday 11 July, these experts will speak at a conference at the University of Pretoria on the subject: “30 Years of the African Charter on Human and Peoples’ Rights: Looking Forward While Looking Back.”

The African Commission is the arm of the African Union with oversight of the African Charter, and they will assess its achievements, while looking ahead to some of the challenges. This is an important subject, in view of the crises and conflicts that continue to plague the continent. South Africa is a state party to the African Charter, and despite its important role in the African Union, not much has been done by the government or the media to raise wider awareness about the Charter and the country’s responsibilities. On Tuesday 12 July, the judges will adjudicate the final of the Moot Court Competition at the Conference Centre of the Reserve Bank of South Africa in Pretoria. The Moot Court is an annual mock trial competition between African law faculties, organised by the University of Pretoria’s Centre for Human Rights. It is the biggest annual gathering of law students and lecturers on the continent.

Sixty African universities are expected to converge at the University of Pretoria this year to argue a hypothetical human rights case before a bench of experts. Six of the best teams will qualify for the final to be adjudicated by these eminent judges. The cases involve burning contemporary human rights issues affecting African countries. This year, participants will argue whether a hypothetical African government has contravened the African Charter or other international law by relocating an indigenous group from the land which they traditionally occupied, and granting a coltan exploitation license over that land to a mining company that is government co-owned.

“One could hardly think of a better way to advance the cause of human rights than to bring together students...chief justices and professors to debate some of the crucial issues of our time in the exciting and challenging atmosphere of the courtroom,” said ex-president Nelson Mandela at the Moot Competition in 1995.

“This year’s Moot is of added significance, as it coincides with the 25th anniversary of the Centre for Human Rights and the 30th anniversary of the adoption of the African Charter,” says Professor Frans Viljoen, Director of the Centre for Human Rights. This is the first time that the African Union, through the Commission, is partnering on this scale with a civil society organisation to address human rights challenges through such a wide-ranging educational project. It is a testament of the importance of the Moot Competition in grooming young legal practitioners who are able to offer African solutions to African problems. “The Moot aims to expose a new generation of lawyers to the tangible benefits of peacefully conflict through judicial means,” adds Viljoen. In 2006, the Centre for Human Rights became the only Sub-Saharan organisation to win the UNESCO prize for Human Rights for Education, when it was recognised for the success of the Moot Competition and Conference, and its Master’s in Human Rights Law programme.