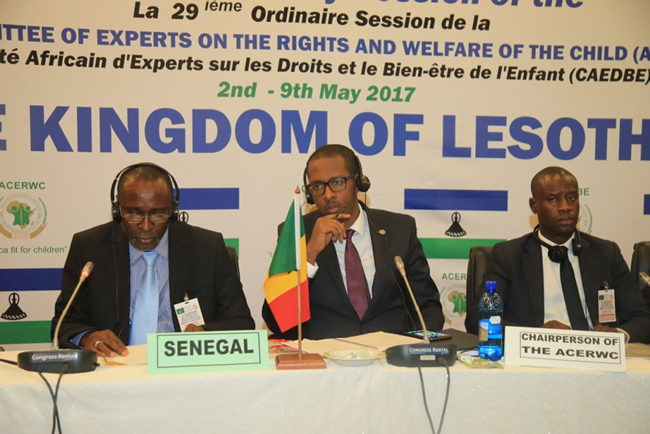 At the recently concluded 29th Session of the African Committee of Experts on the Rights and Welfare of the Child (African Children’s Rights Committee) held in Lesotho, the Centre for Human Rights and RADDHO, an NGO based in Senegal, participated and presented a joint submission on the implementation of Committee’s decision in the decisions Centre for Human Rights and la Rencontre Africaine pour la Defense des Droits de l’Homme (on behalf of Senegales Talibés) v Senegal (Talibe case) ACERWC, Comm/001/2012, 15 April 2014.

This case deals with the conditions of some 100,000 children (called Talibés) who, while attending Koranic schools in Senegal, are required to beg on the streets of Dakar and other urban centres, to secure their own survival.  The Centre for Human Rights and RADDHO submitted the case as far back as 2012.

In its decision, delivered in 2014, the Committee held Senegal responsible for the activities of these schools and directed the state to take measures that the best interests of children are respected.  The Committed noted that it is not enough for Senegal to argue that it has adopted laws making ‘forcing a child to beg’ a criminal offence when government has done only little in practice to effectively implement these laws. In conclusion, the Committee found Senegal in violation of numerous rights in the African Children’s Charter including the right to survival and development; education; health; the prohibition of child labour, and the prohibition of using children in the form of begging; and issued some reparation measures for the state to implement.

In its report submitted to the Committee during the implement hearing, the government of Senegal acknowledged that most of its interventions are still in a pilot phase, and that it has been engaging with various ministerial departments, Koranic teachers, Islamic traditional leaders, civil society organisations and other stakeholders to address the issue. Government also reported that it has entered bilateral agreements with some neighbouring countries to address the issue.

In its presentation before the Committee, the Centre (together with RADDHO) noted that interventions by the Senegalese government are still limited to Dakar (the capital), despite the Talibe issue being a national problem that goes beyond the capital. Government interventions are also ineffective as many Talibe children are still on the streets. A draft law meant to address this problem is taking too long to be adopted by the Senegalese Parliament.

The African Children’s Rights Committee is an African Union (AU) organ, mandated to monitor state compliance with one of the AU’s major human rights treaties, the African Charter on the Rights and Welfare of the Child (African Children’s Charter).  To date, 47 of the 54 AU states have accepted this treaty as binding.  Senegal is one of these states. The Committee consists of 11 independent African experts, who serve part-time and meet twice a year to consider individual communications and review state party reports.

The Director of the Centre, Frans Viljoen, thanked RADDHO for their productive collaboration, and praised the Centre staff, including the Human Rights Implementation Clinic linked to the Master’s programme in Human Rjghts and Democratisation in Africa, for having worked on strategies to ensure implementation of this decision. He noted that it is exciting for the Centre to have participated in the evolution of a new procedure before the Committee.