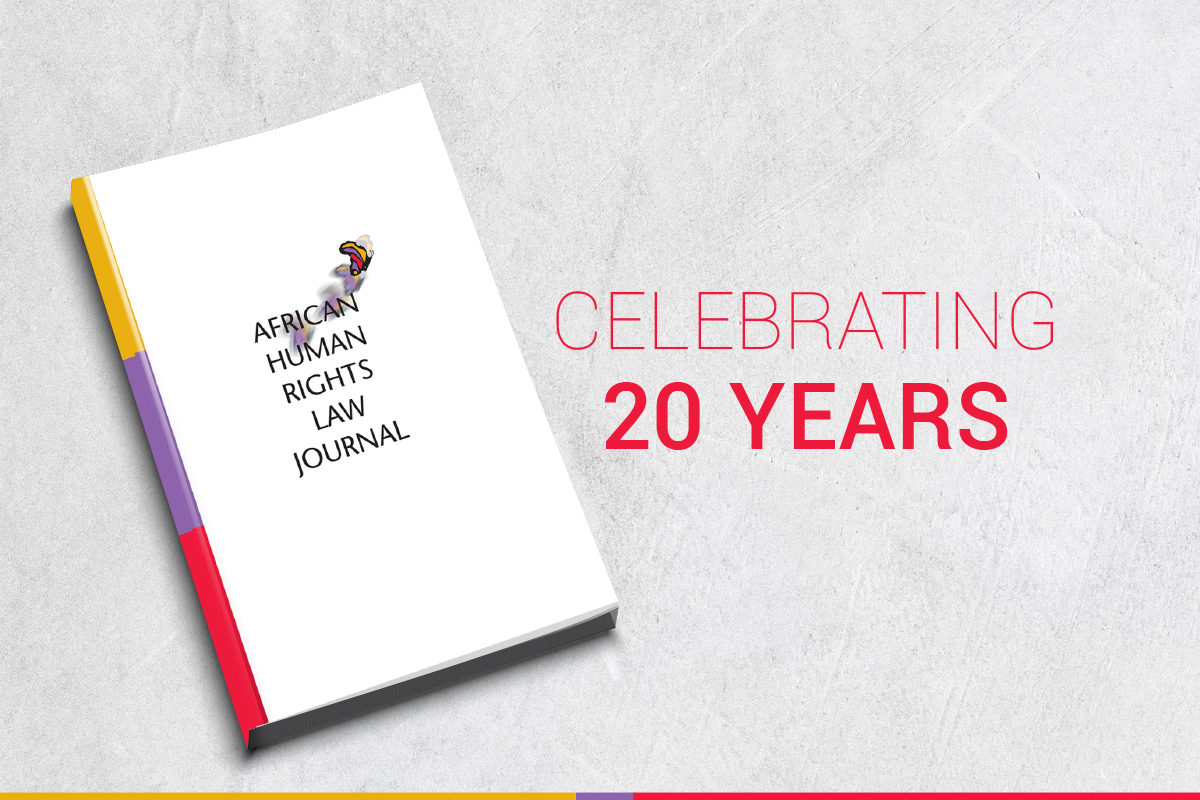 The African Human Rights Law Journal (AHRLJ) in 2020 celebrates 20 years since it first appeared. This milestone was marked with a webinar on 7 October 2020, hosted by the Pretoria University Law Press (PULP), based at the Centre for Human Rights, Faculty of Law, University of Pretoria. The AHRLJ is the only peer-reviewed journal focused on human rights related topics of relevance to Africa, Africans and scholars of Africa.

Two issues of the AHRLJ has since 2001 appeared annually, without interruption. Initially published by Juta Publishers, the AHRLJ has since 2013 been published as an open-access journal by PULP. PULP is a non-profit open-access publisher focused on advancing African scholarship. With a total of 493 contributions in 39 issues (412 articles and 81 ‘recent development’), on average the AHRLJ contained between 12 and 13 contributions per issue. The AHRLJ is accredited with the International Bibliography of the Social Sciences (IBSS) and appears in a number of open access portals, including AfricanLii, the Directory of Open Access Journals and SciELO.

During the event, all the members of the editorial team over the period of 20 years -- Christof Heyns, Tshepo Madlingozi, Annelize Nienaber, Magnus Killander, Solomon Ebobrah, Usang Maria Assim, and Frans Viljoen -- shared their perspectives on the evolution and impact of the AHRLJ.  They noted the following significant features of the 20 years of the AHRLJ:  The AHRLJ contributed towards strengthening indigenous African scholarship. It provided an opportunity for decolonial legal comparison across African countries, from below. It advanced epistemilogical decolonisation by making sources on African topics easily accessible. The AHRLJ has provided a forum for African voices, including those that neeeded to be “fine-tuned”.

The current editor-in-chief, Frans Viljoen, added: “The AHRLJ has evolved in tandem with the African regional human rights system, in a dialogic relationship characterised by constructive criticism.” Viljoen also thanked Isabeau de Meyer, the AHRLJ Manager, for her dedication and professionalism; Lizette Hermann, PULP Manager, for her efficiency, and the team who converted  the AHRLJ into a freely accessible format (Lourika Pienaar and Yolanda Booyzen).

The authors of two of the most cited articles in the AHRLJ shared some perpectives on their contributions.

The most cited article was written by Thaddeus Metz (who recently became Professor of Philosophy at the University of Pretoria): ‘Ubuntu as a moral theory and human rights in South Africa’ (2011) 11 AHRLJ 532-559. Metz expressed his view that 10 years ago he wanted to develop a moral philosophical account of Ubuntu and of African values more generally. At that time there were three major objections to that kind of project. Elaborating on this, Metz continued to explain his strategies and responses to these objections. Metz placed emphasis on Ubuntu and the execution of his strategy. Metz stressed the need for further developing an African account of dignity, Ubuntu and human rights. Metz concluded his reflection with reference to his more recent work that includes a comparison between the western concepts of human dignity and consent against African concepts. This atricle has been cited 265 times (on Google Scholar).

Prof Thoko Kaime (Chairholder of African Legal Studies, University of Bayreuth) reflected on his contribution by sharing his inspiration to write his article. Kaime elaborated on how he wanted to investigate the issue of legitimacy in relation to children’s rights in his article: ‘The Convention on the Rights of the Child and the cultural legitimacy of children's rights in Africa: Some reflections’ (2005) 5 AHRLJ 221-238. Kaime concluded that his article is an expression and reflection of his philosophy on human rights, in the African as well as international law context.

Four presentations focused on emerging scholarship in the last issue of 2019 and the first issue of 2020. Romola Adeola (Post-doctoral fellow, Centre for Human Rights, University of Pretoria, South Africa) reflected on her article that discusses the regional impact of the Convention on the Protection and Assistance of Internally Displaced Persons in Africa (Kampala Convention) and its influence on the human rights landscape.

Horace Adjolohoun (Extraordinary Lecturer, Centre for Human Rights, Principal Legal Officer, African Court on Human and Peoples’ Rights) reflected on his article that was inspired by recent events in the African Court on Human and Peoples’ Rights. Adjolohoun explained why the Court is currently in crisis, as a result of states that had withdrawn their declarations made under article 34(6) of the Court Protocol. The main contention in the article is that the declaration-based adherence to the African Court’s jurisdiction is in crisis due to a cost-benefit imbalance. He reflected on the current crisis the Court is facing as well as how the crisis can be resolved, by suggesting some recommendations regarding the reforming of the Court.

Gus Waschefort (Senior lecturer, School of Law and Human Rights Centre, University of Essex, United Kingdom; Extraordinary Lecturer, Centre for Human Rights) discussed the possibility for the African Court on Human and Peoples’ Rights to engage with the application and interpretation of international humanitarian law. Waschefort positioned his article within the broader scope of his research, especially focussing on the regulation of armed conflict in Africa.

Swikani Ncube (Senior Lecturer, Faculty of Law, University of Johannesburg) reflected on his article by emphasising how the existing institutions can be used better. Ncube referred to the Pan-African Parliament Committee on Justice and Human Rights and his attendance at the Committee’s meetings. Ncube explains his perspective prior to attending these meetings as well as the inspiration he has drawn from it. Ncube referred to the activist approach adopted in his article. In conclusion he emphasised the need to not only take action but also the importance of follow-up procedures.