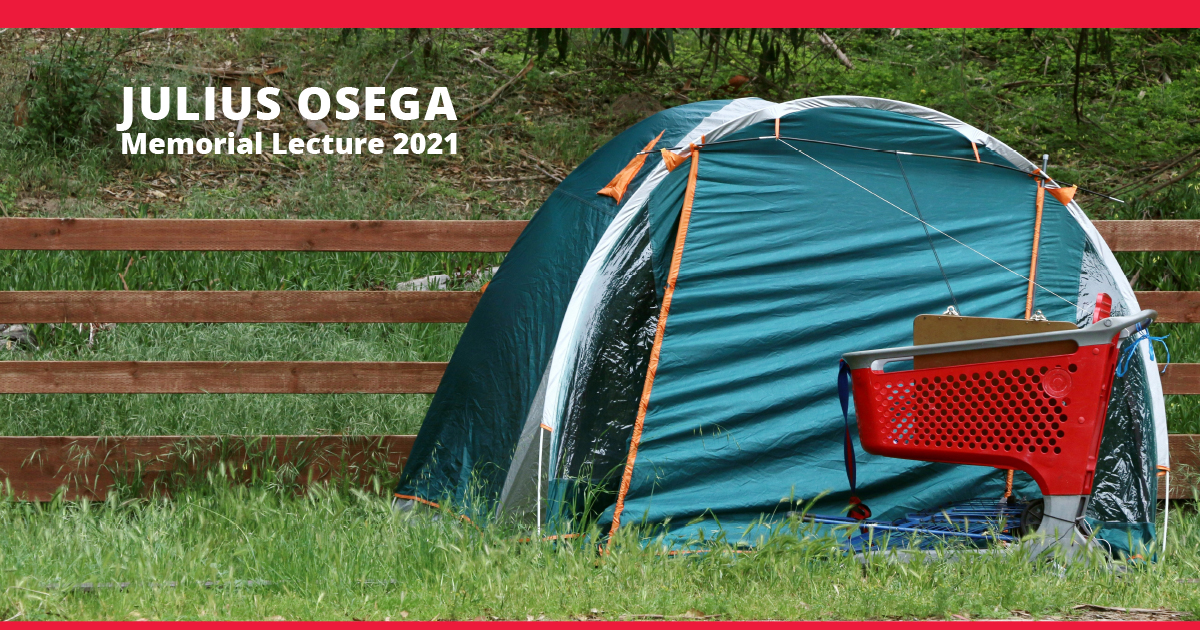 On 16 July 2021, the Dullah Omar Institute for Constitutional Law, Governance and Human Rights, Faculty of Law, University of the Western Cape, and the Centre for Human Rights, Faculty of Law, University of Pretoria, hosted the Julius Osega Memorial Lecture. The lecture was themed "Poverty is not a crime - Undoing colonial criminal justice” and was delivered by Ms Anneke Meerkotter, Executive Director of the Southern Africa Litigation Centre and Commissioner Chikondi Chijozi of the Malawi Human Rights Commission.

The Julius Osega Memorial Lecture is an annual event, aimed at remembering the life of Julius Osega, who in 2001, graduated from the Centre for Human Rights Master’s degree in Human Rights and Democratisation in Africa (HRDA). Julius was unfortunately killed in 2008, during a civilian patrol in the Darfur region of Sudan. At the time, Julius was part of the African Union/United Nations Hybrid operation in Darfur (UNAMID) forces, deployed to protect civilians and assist the political process in the country.

Ms Anneke Meerkotter’s presentation unpacked the notion of post-colonial criminal justice and argued that in many respects, what we define as the post-colonial period has retained the elements of colonialism, particularly in its criminal laws, policing practices, and prisons. She explained that colonial practices persist targeting the poorest and most marginalised in societies in Africa and across the globe. She noted that the development of particular criminal offences is closely linked to societal trends. Periods of socio-economic uncertainty and even crisis with their accompanying fears and insecurities result in the increased regulation of persons deemed as ‘other’. In such instances, the first response of States is usually to target the poor, marginalised and those depicted as representing instability and lack of control (i.e., so-called vagrants, beggars, deviants, delinquents, rogues and vagabonds, and the idle and disorderly). She emphasized the need to rethink policing institutions, policing practices, and criminal laws; in so doing, ‘undoing colonial criminal justice’. In her view, this necessitates concerted efforts towards penal abolitionism, a radical criminology approach, a rights-based discourse and the use of people-centred language.

Commissioner Chikondi Chijozi focused on policing and the criminalisation of status. She noted that arrest is a powerful tool at the disposal of the police which, by its nature, affects a person’s right to dignity; the right not to be subjected to cruel, inhuman, or degrading treatment; the right to freedom of movement; and the right to liberty and security of a person. She argued that for this reason, arrests should comply with legal requirements, should be utilised sparingly, and should be monitored to ensure compliance with constitutional requirements. She made reference to a number of Malawi court decisions illustrating how the criminalisation of status perpetuates colonial laws and arrest practices. She also made reference to the disproportionate impact that the enforcement of COVID-19 regulations has had on status. She noted that people earning a low income are more likely to violate (or appear to violate) the COVID-19 regulations, and more at risk of being harmed by aggressive police enforcement of the regulations. Commissioner Chijozi offered the view that policing can be more meaningful and effective when enforcement does not rely on arrests and fines. Instead, to maximize the public safety impact of COVID-19 regulations, the Commissioner argued that enforcement should focus on education and assistance, fuelled by heavy doses of compassion and courage.

The Julius Osega Memorial Lecture was followed by a question-and-answer session and concluded by a vote of thanks. The lecture was held online using the Zoom platform.