Invitation: Global South Symposium on SOGIE and ESCR A reflection on evolving laws and jurisprudence in Africa 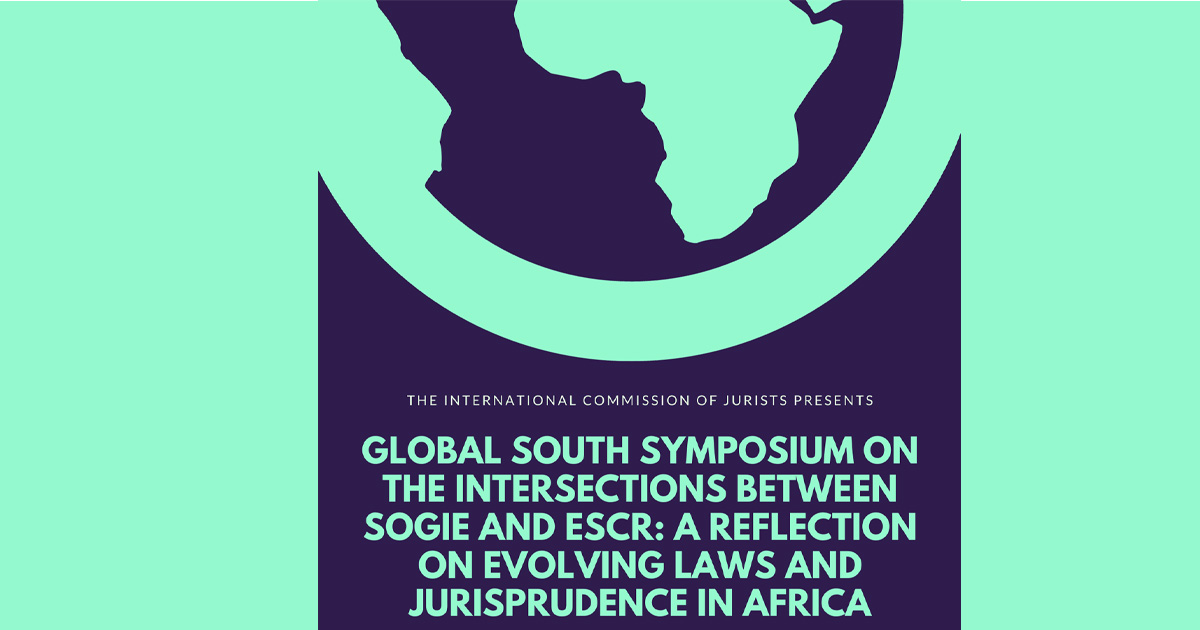 Despite progress in recent years, the majority of countries in Africa continue to criminalize and discriminate against lesbian, gay, bisexual, trans, intersex, and queer (LGBTIQ+) persons in different ways.[1] With the exception of South Africa, gay marriage is not legal in any African country and less than half of the countries on the continent have legalized same-sex relationships. In most instances of criminalization, the criminal and penal laws derive from colonial legacy laws that criminalize same-sex relationships under provisions that prohibit “sodomy” and “carnal knowledge against the order of nature”.[2] In other instances, a growing trend of newly enacted laws criminalize same-sex marriage, expressions of same-sex affection, transgender identity and expression, as well as association and advocacy for or in support of LGBTIQ+ issues.[3] In some of these countries, courts have not offered much support in the protection of the rights of those found to be contravening the “homophobic laws”, and in some circumstances, they have resorted to reliance on technicalities, in making their decisions.[4] Consequently, homophobic social attitudes, discrimination, and even violence have remained openly or tacitly supported by the state, thus heightening the dangers that LGBTIQ+ persons face in Africa.

Furthermore, many cases where the rights of LGBTIQ+ persons have been violated do not make it to courts as there are significant barriers to access to justice for such persons. Nevertheless, some progress has been recorded through judgements from a number of African courts that have been very progressive in their reasoning and have upheld human rights above majoritarian constructs of morality and culture.

For example, in South Africa[5] and Botswana[6], courts have declared laws criminalizing consensual same-sex sexual acts as unconstitutional, while in Uganda and Kenya courts have, in specific cases, sanctioned government officials for violating the dignity of LGBTIQ+ persons.[7]

As a key part of their mandate, the International Commission of Jurists and the Centre for Human Rights have always advocated for the respect and protection of human rights of LGBTIQ+ persons, including through decriminalization of consensual same-sex relationships and the advancement of advocacy for Sexual Orientation, Gender Identity and Expression (SOGIE) issues.[8] The goal is to have a continent that fully respects equally rights of all human beings regardless of their sexual orientation or gender identity and expression, in accordance with international human rights law and standards.

On the other hand, poverty and socio-economic deprivation are endemic across Africa and research suggests that many conflicts and unrest on the continent are fueled by sentiments of socio-economic neglect by governments of various African states.[9] This level of socio-economic deprivation exists despite the fact that most African countries have voluntarily signed up to international and regional human rights treaties that obliges them to respect, protect and fulfil the economic, social and cultural rights of their populace, including but not limited to the African Charter on Human and People’s Rights. The neglect of economic, social and cultural rights is, however, not a new problem. Age-old disagreements on the nature of and the propriety of judicial enforcement of economic, social and cultural rights have existed since the adoption of the Universal Declaration of Human Rights. These disagreements eventually resulted in the adoption of two separate covenants (ICCPR and ICESCR) even though the initial plan was to transform the rights contained in the UDHR into a single binding human rights treaty. These disagreements during the negotiations and the subsequent adoption of two separate covenants has filtered down to national legal systems with most national constitutions on the continent guarantee an elaborate list of civil and political rights that are accompanied by judicial enforcement mechanisms, while economic, social and cultural rights have usually been relegated to unenforceable directive principles of state policy. This despite the fact that international human rights law has now developed to accept and require the full justiciability of ESCR domestically.[10]

On the other hand, judicial officers taking up the mantle of adjudicating economic, social and cultural rights are not always sure of the appropriate remedies to ensure the effective realization of these rights. It is also true that in many jurisdictions, even without the express constitutional or legislative guarantee of justiciable economic and social rights, lawyers and judges have found creative ways of protecting these rights indirectly through the enforcement of civil and political rights. Courts have, for instance, provided protection for the right to health through the right to life. While there is increasing legal recognition of and judicial enforcement of economic, social and cultural rights, the COVID-19 pandemic has shown that concerted efforts need to be extended towards realisation of these rights.

From an intersectional perspective, the linkages between sexuality and Economic, Social and Cultural Rights (ESCR) issues have to be emphasized. Indeed, these linkages are embodied in the Yogyakarta Principles and Yogyakarta Principles Plus 10[12] as well as the jurisprudence of the Committee on Economic, Social and Cultural Rights. It is therefore clear that the extent of an individual’s access to and enjoyment of socio-economic rights has an impact on the extent of their ability to fully realize their claims to sexual rights, particularly through self-esteem, opportunities for privacy, freedom of expression, body autonomy, health rights, sex education, and opportunities for mobilization and access to justice. In this regard, economic circumstances determine the extent to which social biases including the policing of bodies, the normalization of gender stereotypes, and the criminalization of nonconforming attitudes and actions around sexuality and sexual rights can affect sexual and gender minorities. Conversely, negative social attitudes, stigma, criminalization and discrimination against sexual and gender minorities also contribute to violations of their ESCR by preventing easy and uninhibited access to a full range of basic services protected by ESCR in international law.[13]

Participants and Methodology of Symposium

The symposium will be open to the public and held online webinar-style, and participants will be expected to register, after which they will receive a link to the event.

Each of the two days will have two keynote addresses (one on SOGIE and one on ESCR) followed by two different panels on each day. On the second, the SOGIE and ESCR discussions will happen during the first session, in two separate breakout rooms, and the second session on day 2 will be reserved for an intersectional discussion on both topics.

Key questions to be discussed during the symposium.

[1] A Jjuko ‘The protection and promotion of LGBTI rights in the African regional human rights system: Opportunities and challenges’ in S Namwase & A Jjuuko (eds) Protecting the human rights of sexual minorities in contemporary Africa (2017) 261.

[8] For more information on ICJ’s SOGIE work, refer to https://www.icj.org/sogi-casebook-introduction; On the work of CHR see https://www.chr.up.ac.za/sogiesc-unit

[12]The Yogyakarta Principles on the Application of International Human Rights Law in relation to Sexual Orientation and Gender Identity (the ‘Yogyakarta Principles’) are a set of legal principles on the application of international law to human rights violations based on sexual orientation and gender identity and formulated by experts from 25 countries in November 2006. Although the Yogyakarta Principles are not a treaty, the eminent composition of the drafting panel, the reliance on its text by several states, and its adoption by the United Nations Human Rights Council compel its observance as ‘soft law’.