Op-Ed: COVID-19 and the Working Class 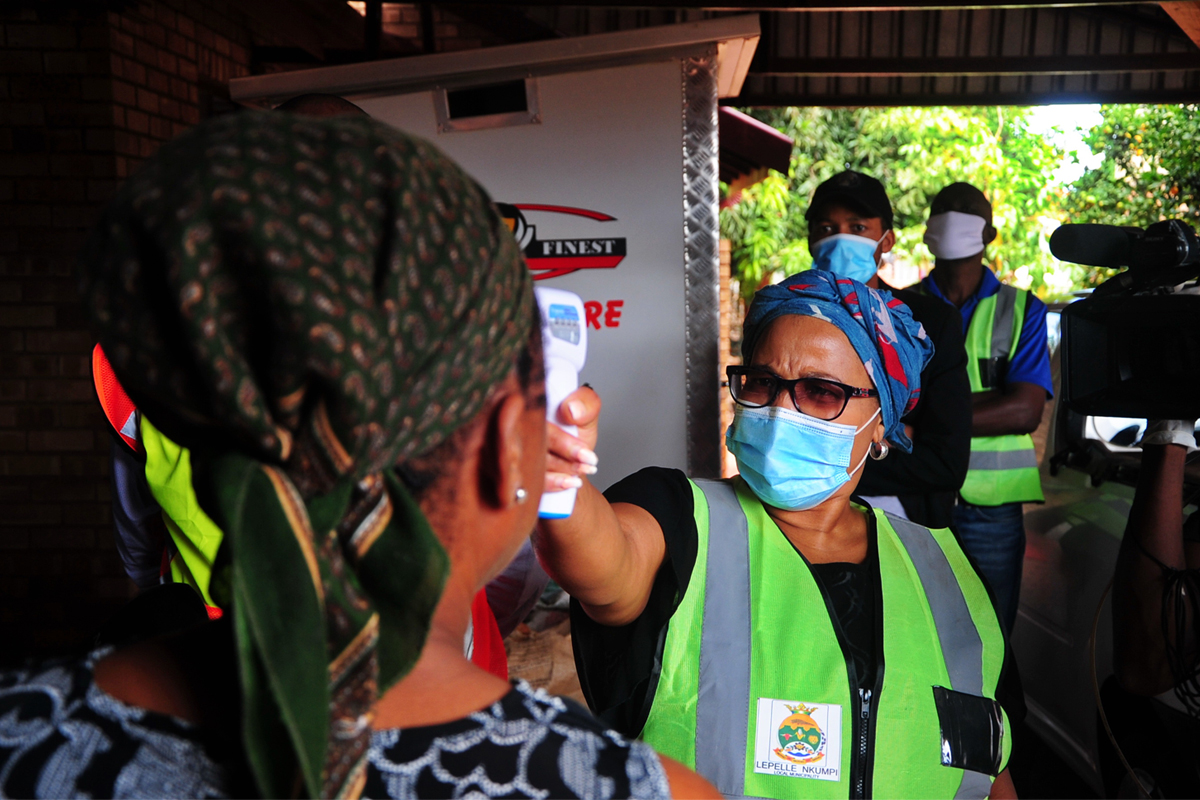 The national lockdown in South Africa which was initiated due to the COVID-19 global health pandemic has revealed another hidden pandemic amongst us.  The latest National Income Dynamic Study (NIDS) Coronavirus Rapid Mobile Survey (CRAM) has revealed that the national lockdown has contributed to the perpetual hunger for 2.2 million South Africans. The report revealed that with 3 million South Africans having lost their incomes and jobs, hunger has become a national crisis exposing food insecurity in the most vulnerable communities.

To date, the coronavirus pandemic is the largest social and economic shock to descend upon the world. The local and international impact of the rapid spread of this virus has had devastating effects which have constantly forced policy makers and politicians to adapt to these unknown winds of change. Policy decisions that are being made under these uncertain times will probably be challenged as reckless and irresponsible, however, every day new information and consequences are being revealed that could not have been entirely predicted.

President Cyril Ramaphosa has in recent national statements conceded that some actions taken by the government in its effort to curb the spread of the coronavirus have been unclear, contradictory and at times not clearly explained to the general public. In his address to the nation in May he said:

And that is why we must acknowledge that as we have confronted this unprecedented challenge, there may have been time when we have fallen short of your expectations” .

He further stated that:

This level of vulnerability, honesty and integrity is commendable of President Ramaphosa especially when the whole nation is watching and waiting for a saviour.

It is no doubt that nations have fallen due to the consequences of the coronavirus and its impact on the global economy, however, there is a face behind the economy. In South Africa, black urban and rural communities have been the hardest hit by the economic shutdown caused by the virus. At the start of the national lockdown intended to curb the spread of the coronavirus, under the advice of the World Health Organisations, the South African government decided to temporarily halt all economic activities. While this was an important and necessary measure, it came with real everyday consequences for poor people in South Africa.

The payment of the Temporary Employer/Employee Relief Scheme was suspended on September 7th after the release of the auditor-general’s report which uncovered alleged fraud and irregularities in the system. The payment benefits initiated by the government was put in place in order to help workers who had been affected by the national lockdown and formed part of President Ramaphosa’s R500m economic and social relief package. However, this plan has been met by numerous challenges which include system backlogs as well as unauthorized payments which have left workers further vulnerable and unable to access assistance elsewhere.

The government is thus investigating reports of large scale looting from the $26 billion coronavirus rescue package which was intended to assist in the economic impact of the pandemic on struggling households. The looting and corruption that have been associated with the economic and social relief package have had rippling effects. In August President Ramaphosa sent a letter to all members and branches of the ANC saying “our movement has been and remains deeply implicated in South Africa’s corruption problem” and described the corruption surrounding the coronavirus relief packages as an “unforgivable betrayal to millions of South Africans. There have been reports of bogus companies created to receive payments on behalf of fictitious workers. The ANC government has always had a corruption problem and many South Africans expressed excitement about the relief packages that were being distributed throughout the country, underneath that excitement was the nervousness that the money allocated to the coronavirus relief packages would fall in the hand of opportunists and indeed it has.

Corruption in South Africa is never just about money going missing and yet another commission of inquiry being launched. The South African government is known for Commissions of Inquiry and it is also known for not acting on the findings of the inquiry beyond the firing of middle management individuals who become scapegoats of corrupt departments. Corruption affects the working class.

47% of respondents in the 2020 Coronavirus Rapid Mobile Survey reported that their households ran out of money to buy food in April 2020, at the start of the national lockdown. Before the lockdown, 21% of households reported that they ran out of money to buy food in the previous year. This reality of food and financial insecurity in South African households has always been there, but this coupled with the massive job loss due to the freeze on economic activity worsened this insecurity. Therefore, when government departments do not provide the relief food packages, and there is corruption within the paying out of the TERF money, there is a real person waiting on the other side. The corruption scandals are another reminder to South Africans that the face of poverty, unemployment and financial vulnerability are the black majority which the black government continues to affirm it is working for.

As many as three million jobs may have been lost since March as a direct result of South Africa’s aggressive COVID-19 lockdown. The public health measures included curfews, business closures, stay-at-home orders, and alcohol bans. With almost all commercial activity halted from March until the easing of the lockdown in August, the Reserve Bank has forecast that the economy will shrink this year by more than seven percent.

The reality of the matter is that the 2.2 million South Africa who have gone hungry over the lockdown period have names and faces. Black women and children have not only been found to be more vulnerable due to coronavirus related policy decisions but have also been vulnerable to abuse and negligence.

Additionally, the rapid reopening of the economy amidst COVID-19 has also exposed the social and economic inequality experienced by women in South Africa. When President Ramaphosa’s announced for the easing of lockdown regulations, he stated that people must return to work to restore livelihoods. This implied that women, who are mostly responsible for the social reproduction of lives in households and communities had to return to work. Further, reopening the service and hospitality industries, where the majority of women are employed, has exposed them to risk with minimal social protection from the state. As a result, this has heightened the burden on working-class women to provide care and resources with the lockdown induced income loss and increased costs on food and transport. This goes to show the continued exploitation of women’s social reproductive work and the state’s failure to provide welfare services i.e adequate investment in education, food, transport and housing due to its austerity policy.

The coronavirus is deepening the food insecurity crisis in the world and is further exposing pre-existing inequalities that have deep historical locations in South Africa. The Oxfam report on hunger and COVID-19 has estimated that:

“By the end of the year 12, 000 people per day could die from hunger linked to COVID-19, potentially more than will die from the disease itself”.

These numbers are startling because indeed the pandemic is the final straw for millions of people who have already been struggling even before this deadly virus descended on our shores. The South African government has to do more than conduct another commission to inquire about corruption while those who are most implicated get reshuffled around different departments. The government has to show the South African people that indeed the poor and vulnerable not only inform good policies but also inform the swift action of those policies. The corruption scandal with the UIF relief fund has been a huge shame in the face of the ANC government and especially in the face of President Ramaphosa. It has reminded us yet again of the weaknesses of employment laws in South Africa and their inability to protect workers when a national disaster strikes.

It has been estimated by the UNU-WIDER report that due to Covid-19, poverty at the global level could increase across all three standardized poverty lines. 80 million for the US$1.9/day poverty line, of more than 130 million for the US$3.2/day standard, and of almost 124 million for the higher line of US$5.5/day. These statistics pose a challenge to the UN’s Sustainable Development Goal of eradicating poverty by 2030, as they record the highest figures since 1990. Notably, South Africa and other developing countries would be the hardest hit by the pandemic, with an estimated increase in infant and maternal mortality, undernutrition, educational achievement and receding employment insurance. A new poverty class that surpasses the present precarious working class is yet to be witnessed if neoliberal economic and social policies are not relooked.

More significantly, in South Africa’s case as it has returned to a neoliberal convention that has prompted it to adhere a ‘global best practice’ lockdown tailored for the wealthy societies of the West rather than taking into consideration the socio-economic issues it faces- precarious livelihoods, corruption and unaccountability. In moving to reopening the economy, the ramifications of adapting to this universal strategy have been revealed as these aforementioned issues have been exacerbated. Now more than ever is the time to act. Now more than ever the ANC has to show its consistency in not only speaking out against corruption but showing us as the South African people that together, they can fight and rid governments of corruption swiftly.

Bonolo Makgale is a Programme Manager of the  Democracy and Civic Engagement Unit Centre For Human Rights, University of Pretoria. She is a social justice activist with an academic interest in Governance, Politics and Democratisation in Africa. She writes for DDP in her personal capacity and her views do not represent those of the organization.