Statement: Centre for Human Rights (NGO enjoying observer status) to the African Commission, at its 64th ordinary session on the situation of human rights in Africa 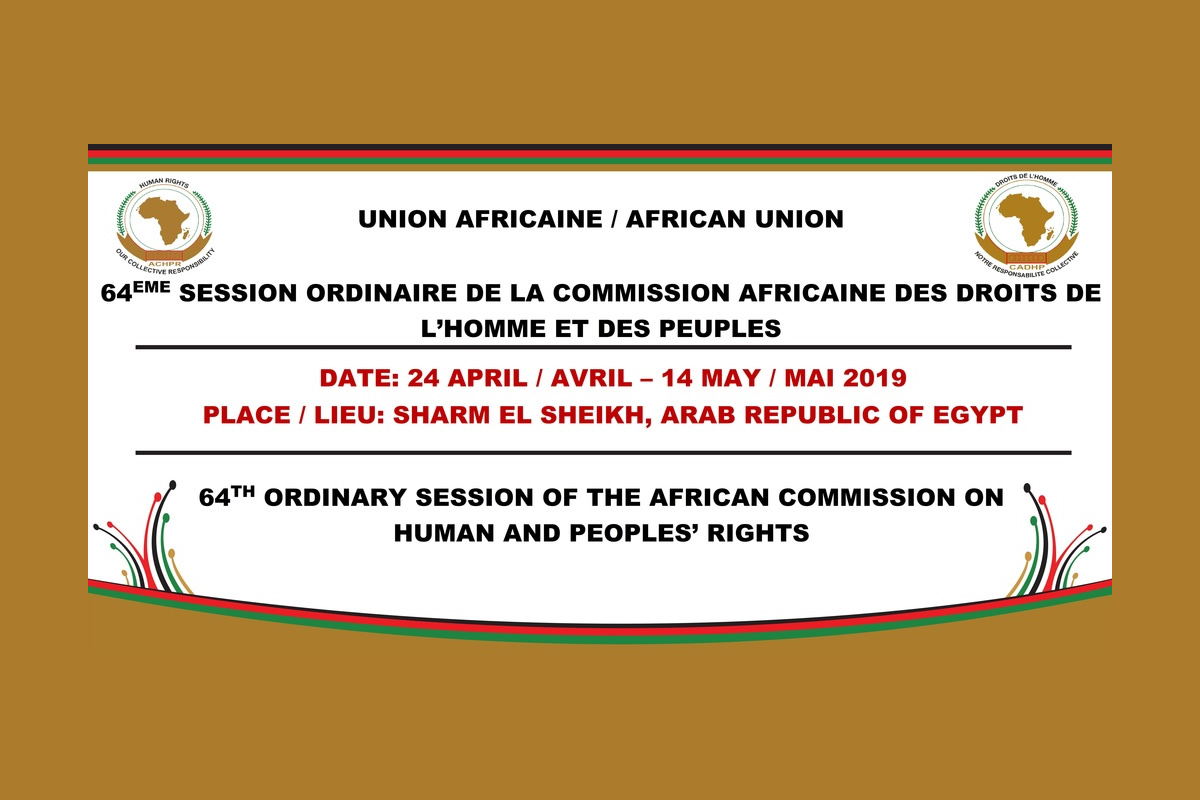 Statement by the Centre for Human Rights, Faculty of Law, University of Pretoria (NGO enjoying observer status) to the African Commission on Human and Peoples’ Rights, at its 64th Ordinary Session, Sharm El-Sheikh, Egypt, on 26 April 2019, on the situation of human rights in Africa.

Autonomy and independence of the Commission

We urge AU member states that have their peoples’ best interests at heart to recommit themselves to the spirit and commitments set out in the AU human rights treaties and to premise their future engagement with the African Commission on the principle of its autonomy and independence.

We urge the Commission to work closely with the African Court on Human and Peoples’ Rights and the African Committee of Experts on the Rights and Welfare of the Child to work out a joint response to Decision 1015, to affirm their independence, autonomy and complementarity.

I now briefly turn to two such situations of grave concern:

The Centre welcomes the submission by Egypt of its state report. The examination of this report at the present session places the focus on long-standing deficiencies in the rule of law and the severe nature of human rights violations in Egypt. The incumbent President led the 2013 coup d’état that overthrew the elected head of state, a situation that without doubt qualifies as an ‘unconstitutional change of government’. According to the AU’s own robust legal instruments (article 30 of the Constitutive Act), this must lead to https://au.int/sites/default/files/pages/32020-file-constitutiveact_en.pdf">suspension. Since 2010, the AU Assembly (Decision Assembly/AU/Dec.269(XIV), para 6(b)) Decision Assembly/AU/Dec.269(XIV) instituted the rule that in the case of an unconstitutional change, the authors of that change should not contest any elections that follow. (http://www.peaceau.org/uploads/assembly-au-dec-269-xiv-e.pdf). In flagrant disregard for this rule, the AU Peace and Security Council reinstated Egypt’s membership on 17 June 2014 (http://www.peaceau.org/uploads/psc-com-442-egypt-17-06-2014.pdf), thereby confirming the https://issafrica.org/iss-today/the-au-on-egypt-between-a-rock-and-a-hard-place">‘legitimisation of unconstitutional seizure of power’. Any attempt to extend the incumbent President’s term is therefore premised on an illegality; and should be denounced.

Some of the most pertinent human rights violations are:

In disregard of the importance of peoples’ voice in fostering democracy, Egypt has in the recent past curtailed the space in which NGOs can function, for example by way of intimidation through prosecution.

The human rights situation of women is dire. All forms of abortion are criminalized, leading to high rates of ‘back-door’ abortions that ultimately contribute to high maternal mortality rates. Violence against women is widespread but underreported; and there is inadequate support to victims of violence.

There has been a significant increase in the application of the death penalty in Egypt since 2014.

Repressive laws are used to threaten, harass, intimidate and persecute human rights defenders, journalists and other media practitioners, leading to a situation characterised by fear, antagonism and persecution of dissenting voices justified under the anti-terrorism agenda.

Disregarding the Commission’s Resolution 275, the Egyptian government arbitrarily arrest and detained scores persons on the basis of their real or perceived sexual orientation or gender identity.

In response to the numerous human rights violations in the country, a flood of complaints has over the past few years been submitted to the African Commission. Faced with these complaints that all allege serious violations by the state, the Commission adopted a series of provisional measures, and directed urgent appeals to the Egyptian President, in many instances calling on the government to refrain from executing victims of unfair trials. In three of complaints, the Commission found far-reaching violations by the state: The case of http://www.achpr.org/files/sessions/19th-eo/comunications/355.07/decision_on_communication_355_eng.pdf">Hossam Ezzat & Rania Enayet (represented by Egyptian Initiative for Personal Rights & INTERIGHTS) v The Arab Republic of Egypt (2016) concerned freedom of religion; http://www.achpr.org/files/sessions/10th-eo/comunications/323.06/achpreos10_232_06_eng.pdf">Egyptian Initiative for Personal Rights and INTERIGHTS v Egypt (2011) was brought following violence that occurred during a protest by riot police and supporters of the government; and the case of http://www.achpr.org/files/sessions/9th-eo/comunications/334.06_/achpreos9_334_06_eng.pdf">Egyptian Initiative for Personal Rights and Interights v Arab Republic of Egypt (2011) concerning fair trial and protection from torture and ill-treatment. In these cases, the Commission called on Egypt to compensate victims, to investigate incidents and bring perpetrators to justice; change its laws; refrain from executing those sentenced to death; and to release victims. Since the above decisions, Egypt has not respected the African Commission’s recommendations; and the human rights situation in the country has not improved.

We call on the Commission to use the examination of Egypt’s state to engage Egypt with rigour on the manifold human rights violations in the country, and its lack of respect for Commission’s standards and findings.

The Centre expresses its grave concern about the human rights situation in Cameroon, particularly in the North-West and South-West Regions. We recall that the Commission in 2018 adopted a resolution concerning human rights violations in Cameroon, and decided to undertake ‘a general human rights promotion mission’ to the Republic of Cameroon. To date, this has not happened.

Among the numerous human rights violations, we highlight the situation of Maurice Kamto, leader and presidential candidate of the Cameroon Renaissance Movement Party in the 2018 elections. Kamto is an internationally respected jurist, and was a member of the International Law Commission of the United Nations from 1999 to 2016. The 2018 elections were marked by allegations of fraud and the reporting of irregularities, leading to protests by supporters and allies of the Cameroon Renaissance Movement (MRC) opposition party led by Maurice Kamto. It should be recalled that the AU Election Observation Mission concluded that the elections were conducted ‘in a context of operational, security and political challenges’; and encouraged ‘all stakeholders to engage in an inclusive political dialogue and pursue political and electoral reforms’.

Together with around 200 people, Kamto was arbitrarily arrested in January 2019 and detained without immediate access to a lawyer. On 9 April 2019 the Court of Appeal in Cameroon’s Central Region confirmed the decision taken in the first instance, and rejected the release of Maurice Kamto and six others. However, the proceedings in the Court of Appeal took place in the absence of Maurice Kamto and his lawyers.

We call on Cameroon to release Maurice Kamto and other political prisoners, to allow them to prepare for their legal defence, and ensure that their right to a fair trial is fully respected.

We urge the Commission in its next activity report, to draw the attention of the AU Executive Council and Assembly to the situation in Cameroon, and to provide information at its disposal, and to collaborate with the AU Peace and Security Council, in accordance with article 19 of the AU Protocol establishing the Peace and Security Council, in order to ensure that this fact-finding mission is actually undertaken.

Download the Shadow Report to Egypt's 2017 Periodic Report
Presented by the Centre for Human Rights, University of Pretoria
(In respect of the state report by Egypt, to be considered at the Commission’s 64th ordinary session)