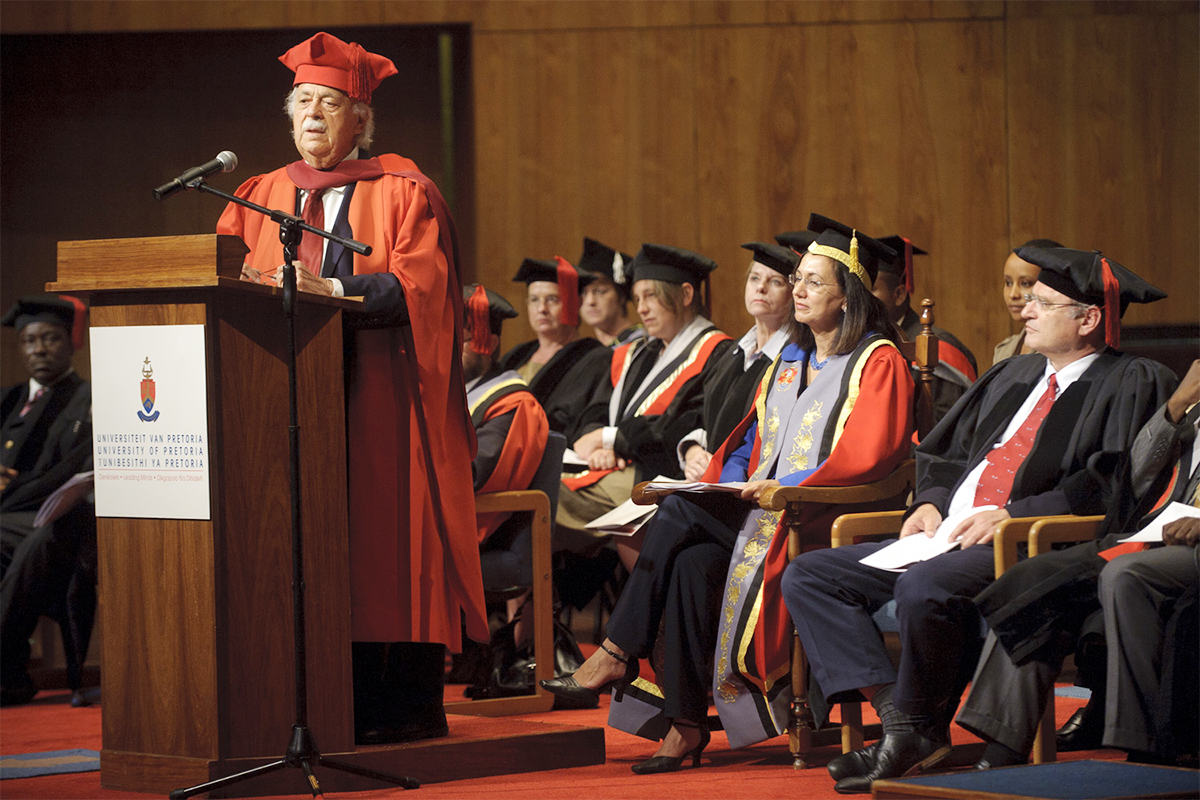 With the passing of Advocate George Bizos on 9 September 2020, South Africa lost an exceptional human rights lawyer who devoted his life to the promotion and fostering of a human rights culture in South Africa. “His life demonstrates the best use to which the law can be put: as a tool to defend those at risk of abuse of power, and as a tool for social transformation and human connection’”, said the Director of the Centre for Human Rights, University of Pretoria, Frans Viljoen.

When it was extremely unpopular to do so, George Bizos defended political opponent of the apartheid government. He was a senior member and honorary life member of the Johannesburg Bar, and as practicing lawyer made a name for himself as a defence counsel for ant-apartheid activists. He served as former President Nelson Mandela’s legal counsel since the mid-1950s, and was part of the defence team in the Rivonia Trial (1963-4), the trial of Bram Fischer, the inquest into the death of Steve Biko, and the legendary Delmas Trial. He also was the leader of the team appearing for the Constituent Assembly in the case before the Constitutional Court to certify the adherence of the Constitution of the Republic of South Africa, 1996. Further afield, in Zimbabwe, he was the lead counsel of the team that defended opposition leader Morgan Tswangirai during 2003 – 2004 on a charge of treason.

Advocate Bizos had a long-established link with the Centre for Human Rights. He has been an active participant in Faculty events, and delivered the keynote address at a prize-giving ceremony of the Faculty. In 2011, on nomination by the Centre, the University of Pretoria awarded an honorary Doctor of Laws degree to him.

George Bizos was not afraid to speak his mind. Speaking in 2011 at a time of criticism by the ANC being levelled against the Constitution and the courts, and attempts to appoint a body to assess the decisions of the Constitutional Court, he called on government not to undermine the judiciary, as this was done previously by the apartheid regime. He also said the judiciary should remain independent and free of political interference:

“I hope that our current ruling party does not intend to follow the apartheid regime’s example, but I do have some concerns. The courts as well as the individuals and organisations that bring human rights cases against the executive, to whom some impute false motives, have been subject to severe criticisms bordering on demonisation,” Advocate Bizos said.

His life’s work of principled humility remains with us, as do his words. Concluding his remarks upon receiving his honorary doctorate in 2011, Advocate Bizos noted that the pursuit of justice is a never-ending struggle and “in defining our rights, there will of course be times when we disagree, but each day, through court judgements and public dialogue, we reinforce the shared values in our Constitution that unite us as a country. If we follow the Constitution, our most fundamental law, I am optimistic that we will not go wrong”.