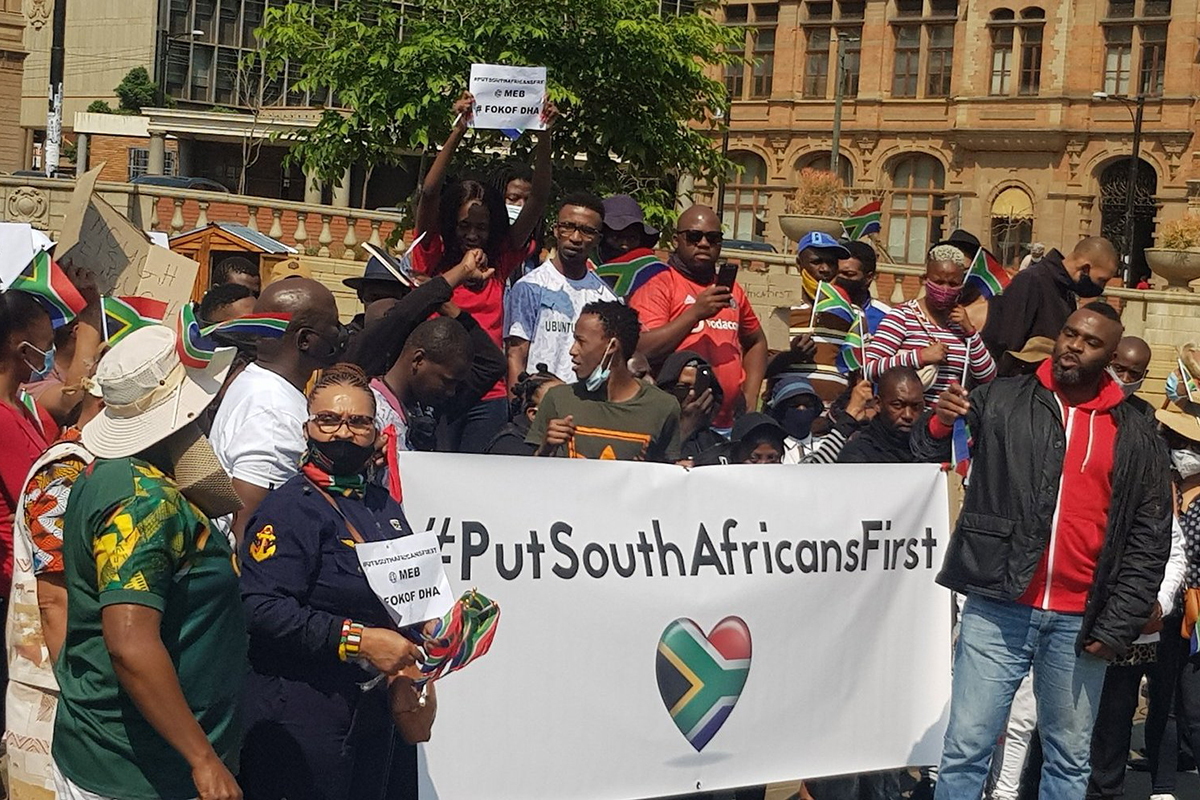 The Centre for Human Rights, University of Pretoria, is distressed by the march on 23 September 2020 against foreign nationals in the City of Tshwane (#PutSouthAfricansFirst). The marchers targeted Nigerians and Zimbabweans, in particular. While declaring that they are concerned about illegal migrants, the marchers spoke of ‘Nigerians’ and ‘Zimbabweans’ in a very general way. The march organisers in one breath expressed concern about illegal migrants and drug trafficking. By making this association between migrant status and drug trafficking, the marchers fell into the trap of generalisation and stigmatisation of all of these non-nationals as both illegal and criminal.

South Africa is a rainbow nation. Respect for diversity is at the heart of what sustains us as a nation. According to the Preamble to our Constitution, “South Africa belongs to those who live in it.” The South African Constitution protects the right of everyone to have their dignity respected and protected. Populist and stigmatising narratives are dehumanising and have the tendency of excluding certain categories of persons from the South African society.  Being proudly South African cannot be faulted. However, marching under the South African flag while invoking slogans based on stigmatisation and false statements should be faulted.

South Africa is an African nation. Our President is the current Chair of the African Union. As a people, we hold dear the value of ubuntu, which includes hospitality to neighbours, and approaching every other human being as an equal in dignity.  Migration is a human phenomenon, and we should understand its African roots and dimensions. #AfricanMigrantsMatter

While this march was not supported or condoned by the South African government, it still bears particular forms of responsibility. In the short term, high level members of government should unequivocally condemn the spirit and premises of the march -- and carefully explain why they do so. While the number of marchers was relatively small, its message reverberated broadly. If left unchecked, the demeaning nature of this narrative will foster, lead to more serious acts and may gain wider appeal. There are too many example on our continent of narratives of ‘othering’ and dehumanisation that enabled serious human rights violations, such as calling Tutisi’s being referred to as ‘cockroaches’ in the run-up to the Rwanda genocide.

On the longer term, this kind of march underlines the need for the government to deliberately cultivate social cohesion between South Africans and foreign nationals. The 2001 Declaration of the World Conference against Racism, Racial Discrimination, Xenophobia and Related Intolerance, held in Durban, urges states to “combat manifestations of a generalised rejection of migrants” and discourage “xenophobic behaviour and negative sentiments towards, or rejection of, migrants.” To give effect to these obligations, our teaching curricula should inculcate a sense of pan-African belonging, an appreciation of the value of migrants to our society, and the historical links between South Africa and other African states. How many of us know about the ‘Mandela tax’, in terms of which all Nigerian civil servants in the 1970s and 1980s paid 2% of their salaries to support the liberation struggle in South Africa? Are we aware that many of our leaders stayed in Nigeria while organising the anti-apatheid struggle? Beyond schools and universities, the broad public should be targeted through social media campaigns that counter anti-immigrant sentiments.

Underlying concerns need to be addressed

The Centre understands that there are concerns regarding the state of security in the Republic.  However, crime has no nationality. It is evidently wrong to target people from particular countries or label them as criminals, drug dealers or persons responsible for the social ills in the Republic of South Africa. Such rhetoric only seeks to reinforce xenophobic and populist narratives, from which South Africa strongly distances itself from both constitutionally and in the 2019 National Action Plan to Combat Racism, Racial Discrimination, Xenophobia and Related Intolerances. Law enforcement agencies need to hold accountable anyone who instigates violence based on anti-migrants rhetoric and xenophobia, following due process of law as South Africa law requires.

It is undeniable that many South Africans face unemployment. A recent Human Rights Watch report on xenophobic violence against non-nationals in South Africa observes that non-nationals are blamed for unemployment, crime and neglect by the government. The grievances of the high level of unemployment, unacceptable levels of income inequality and economic hardship of a majority of South Africans living in adverse poverty are genuine and need to be attended by the state and policy-makers. But channelling the anger to our brothers and sisters from other parts of the continent is misplaced. The South African community needs to own its failures and stop attributing its socio-economic challenges to ‘others’ in society. It is therefore also important that the government should attend to the genuine grievances of many South Africans concerning economic conditions, unemployment and unacceptable level of income inequality.