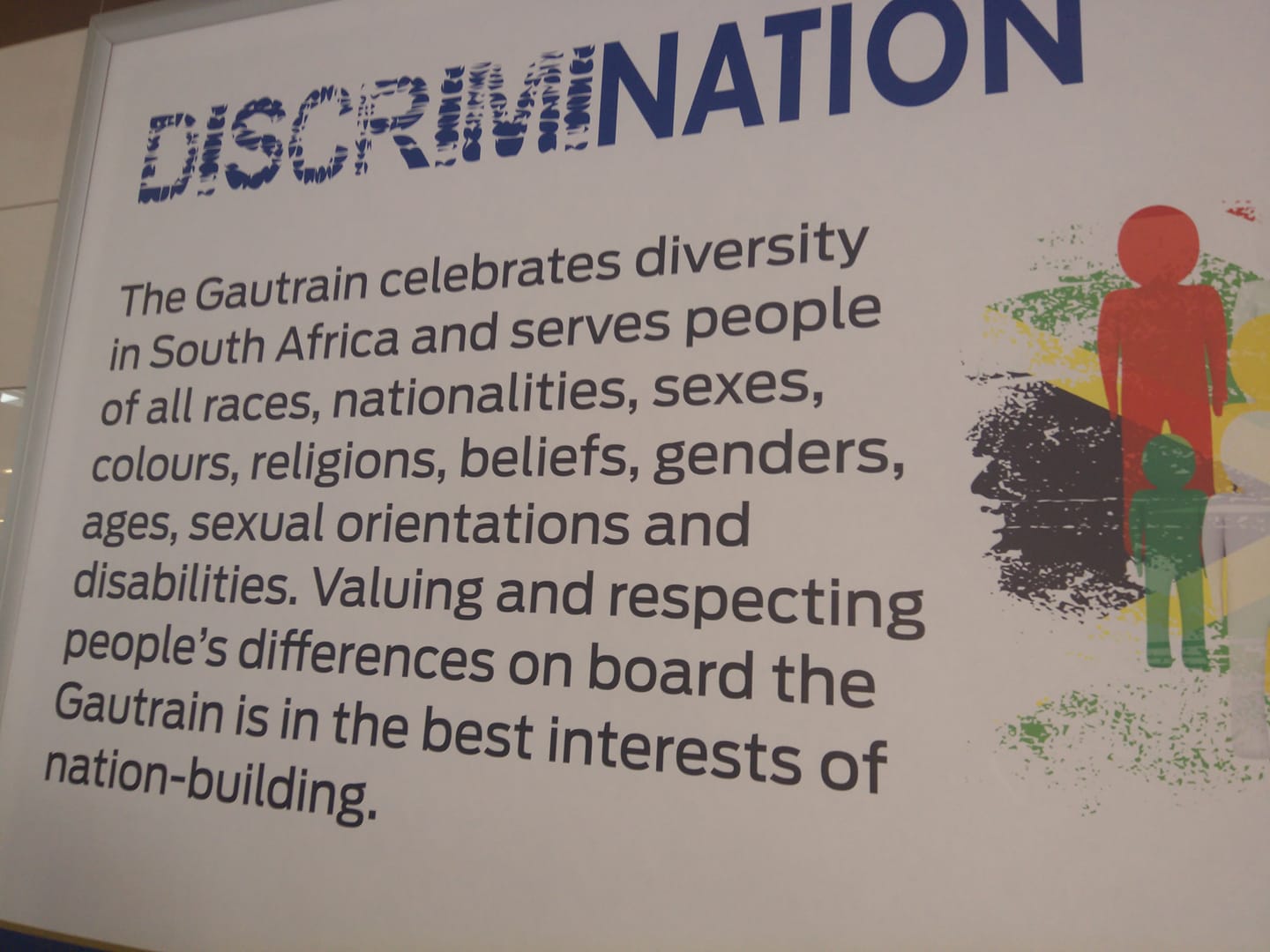 Recently, as I was commuting on South Africa’s Gautrain, an urban passenger train transport system that connects several economic and residential hubs in the county’s cosmopolitan province of Gauteng, I came across a sign on the wall of the station that read: ‘The Gautrain celebrates diversity in South Africa and serves people of all races, nationalities, sexes, colours, religions, beliefs, genders, ages, sexual orientations, and disabilities. Valuing and respecting people’s differences on board the Gautrain is in the best interests of nation-building.’

Some years back, when I was working at the Refugee Law Project in Uganda, the organisation had a framed policy statement on its walls that clearly stated that the organisation does not discriminate among its staff and clients and went ahead to mention the grounds on which discrimination was prohibited in the offices and work of the organisation. It included sexual orientation – a brave policy statement to make in a country where homosexual acts are illegal and where human rights NGOs have been targeted for ‘promoting homosexuality’. I must say though that the decision of the Refugee Law Project to work non-discriminatorily earned it some trouble with the Office of the Prime Minister in charge of refugee issues in the country. At the time, the organisation was a host to the Civil Society Coalition on Human Rights and Constitutional Law (CSCHRCL) – a network of several human rights organisations that were advocating for the observance of the rights of sexual and gender minorities in the country in the wake of the introduction of the Anti-Homosexuality Bill in the country’s parliament.

Mildmay Uganda, another Ugandan organisation that works in the area of HIV/AIDS prevention and treatment across populations, put up a policy notice for its staff on its walls that stated: ‘Prohibition of Stigma and Discrimination: No health facility or health provider shall discriminate between patients on ground of disease, religion, political affiliation, disability, race, sex, age, social status, ethnicity, nationality, country of birth, or other such grounds.’ Mildmay Uganda literally took the wording of this policy statement from Uganda’s Constitution, which states pretty much the same thing except where they (Mildmay) added the phrase ‘or any other such grounds’.

By now, you the reader must be wondering why I am fronting the above real scenarios. Well, here is the reason: Many a country has a Bill of Rights in their Constitution that expressly prohibits discrimination based on a number of grounds. While some mention sexual orientation, others do not. South Africa’s Constitution was the first in the world to expressly mention sexual orientation as a prohibited ground for discrimination. Discrimination is a rife phenomenon in societies across the world. People get discriminated against in services, opportunities and they are targeted with hate speech and violence or the threat of violence because they are ‘’different’ and do not conform to the norm, majority viewpoint, or the status quo. States therefore take it upon themselves to stem discrimination by laying down the law, either in the form of a Constitution or specific statute. In the example of South Africa for instance, horizontal discrimination is prohibited, therefore it is not only the state that is not allowed to discriminate, even private individuals and corporate entities may not discriminate.

However, it takes a committed corporate entity to expressly and overtly express non-discrimination through public policy statements such as those made by the three corporate entities above. For any organisation that deals with people, whether in the form of its staff, its clients, or its venders, it is of paramount importance that it expresses transparency in the area of non-discrimination. Notices such as those put up by the Gautrain transport company, Mildmay Uganda and the Refugee Law Project go a long way in reassuring users of the services of such companies and organisations that they will be well-treated, their dignity respected, and that they will get services irrespective of their attributes. Also, such notices serve as a constant reminder to organisational and company staff that if they discriminate, they will be breaking the law and also disrespecting company policy.

Stemming discrimination is not only a responsibility of the state. It includes you, me and the organisations, companies, educational institutions and businesses we establish and register. I can guarantee you that a transgender or gay person will now confidently board the Gautrain, rest assured that the Bombela Concession Company cares.  Does your company or organisation care?