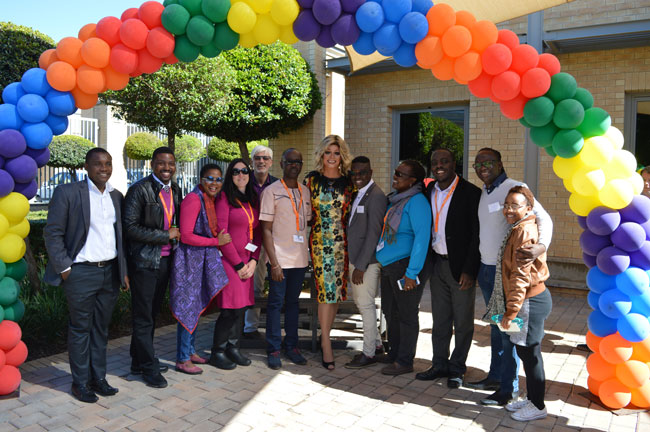 Irish drag queen and LGBTI activist Rory O’Neill/ Panti Bliss launched the book Protecting the human rights of sexual minorities in contemporary Africa edited by Sylvie Namwase and Adrian Jjuuko. The launch took place on 17 May, the International Day Against Homophobia, Transphobia & Biphobia. The Embassy of the Netherlands, the Embassy of Ireland, HiVOS South Africa and the Centre for Human Rights partnered to organize a Rainbow Happy Hour and a round table discussion on that day.

The Rainbow Happy Hour provided an opportunity for South African human rights and LGBTI organisations to network with the diplomatic corps. More than 60 activists, diplomats and academics were present.

Ambassador of the Netherlands, Ms. Marisa Gerards and Ambassador of Ireland Liam MacGabhann gave a word of welcome. Ambassador Gerards highlighting that LGBTI rights are human rights and they should apply to all people. She also drew attention to the Amsterdam rainbow dress. The bodice of the dress is made of the flag of Amsterdam, and the remainder of the 16-meter-long dress consists of flags of those countries where it is illegal to be gay. The ambassador further highlighted the contributions the Netherlands makes towards LGBTI rights, including the international programme: “Partnership for Rights Inclusivity, Diversity and Equality” (PRIDE) Programme.

Ambassador MacGabhann used the Irish example to illustrate that positive change is possible, especially if a human touch is applied. Ireland is the first country that introduced same-sex marriages by popular vote in 2015, while homosexuality was only decriminalized in 1994.  He also stood still at the links between LGBTI rights, gender inequality, HIV AIDS in South Africa, and the recent surge  gender based violence.

Panti then shared her experience as a queer in Ireland going from a clandestine, secret community to a group of people that is accepted and legally protected in Ireland.

After the Happy hour there was a Round Table Discussion on LGBTI rights in the current environment & the Power of Social Movements to effect change. Facilitator Norman Taku guided the more than 60 activists by posing several questions about the effectiveness of the law, (international) solidarity and the power of social movements.  Eusebius McKaiser, Gabriel Khan and Rory O’Neill were keynote speakers.

For more information, photo’s, the written speeches or the minutes of the round table discussion please contact: