Electronic copies of the Centre for Human Rights Annual Reports are now available for download.
The following years are available: 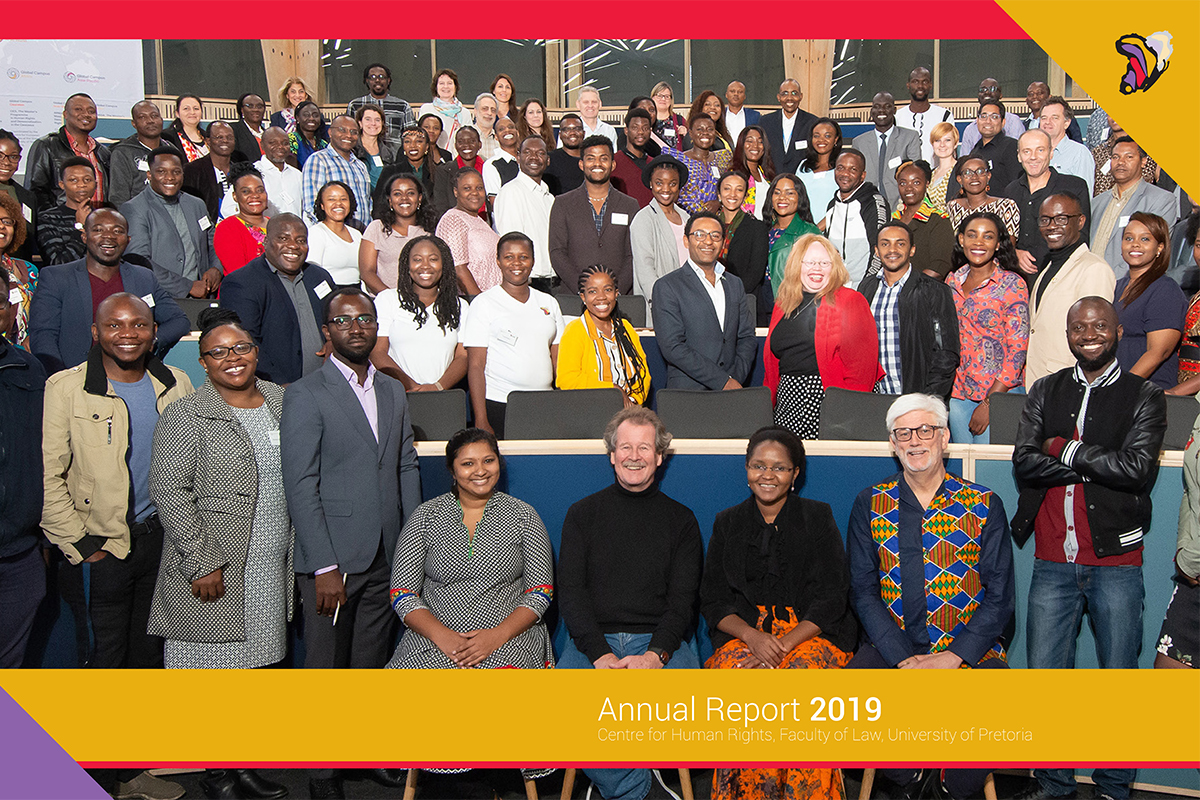 In an age during which human rights are increasingly intellectually questioned, and placed under political threat, it is reassuring and important that human rights institutions still prosper.

In 2019, the Centre for Human Rights forged ahead to establish itself as a credible institution advancing the rights of particularly the most vulnerable among us in Africa, and to raise levels of understanding and awareness of rights on the continent. 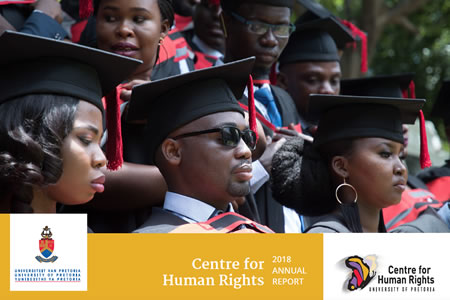 In 2018, the Centre – together with the rest of South Africa and the world – celebrated a number of human rights landmarks. We marked 100 years since the birth of one of the greatest sons of our soil and one of the greatest human rights icons, Nelson Mandela. It was 70 years since the adoption – on 10 December 1948 – of the Universal Declaration of Human Rights. To commemorate those milestones, an honorary degree was awarded to former Deputy Chief Justice Dikgang Moseneke, on the occasion of International Human Rights Day, and a multimedia competition calling for creative portrayals of the Universal Declaration provisions. The tenth edition of the Nelson Mandela World Moot Court Competition also took place in 2018.

The Centre continued its manifold activities towards fostering a human rights culture in Africa, with academic programmes, research, contributing to the human rights discourse in Africa, advocacy and capacity building.
The dedication and professionalism of the Centre staff made this possible. Here, I mention just a few highlights. 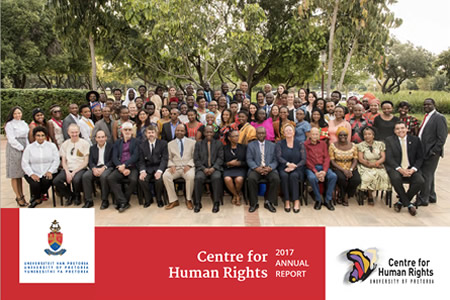 Functioning as an academic department in the Faculty of Law since 2007, the Centre for Human Rights has over a decade established itself as a place of academic excellence. With the NRF ratings of 4 colleagues reconfirmed in 2017, all but one of the Centre’s 7 academics have a B or C rating. With 12 doctoral candidates graduating, the Centre saw the largest number of doctorates completing their studies in one year. In addition, 57 students graduated with Master’s degrees. This number included the first 5 graduates of the LLM/MPhil in Sexual and Reproductive Rights in Africa, the Centre’s first hybrid learning programme, delivered on-line as well as through in-class ‘block weeks.’ 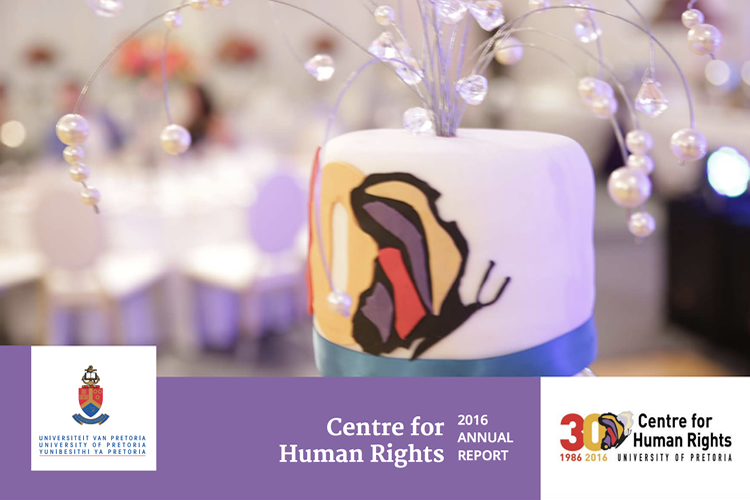 The year 2016 was a year of remarkable coincidence and celebration. Both the Centre for Human Rights and the African human rights system commemorated 30 years of existence.
Over these three decades, both the Centre and the African human rights system grew in the scope of its activities and number of its staff, and have undergone consistent growth, strengthening and reinforcement, a process that can be described as ‘institutionalisation’. 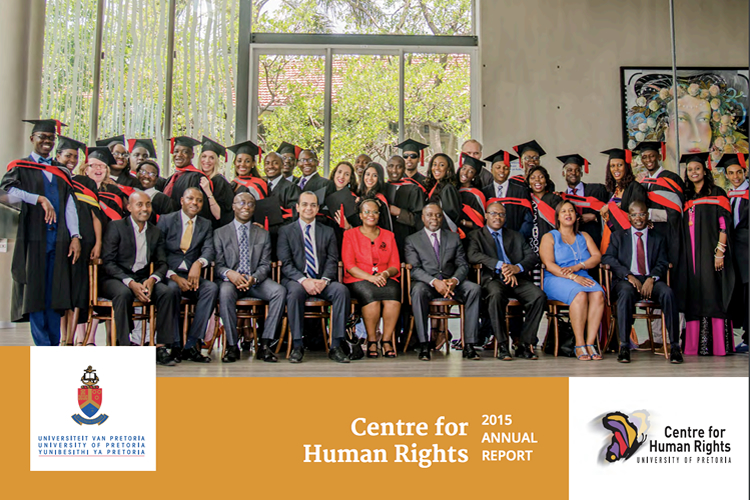 The highlight certainly was the ten doctoral degrees awarded to candidates registered in the Centre. This record number reflects one of the Centre’s aims, which is to contribute to the academic discourse and academic capacity in Africa. The Centre further runs four Master’s programmes, of which the LLM/MPhil in Human Rights and Democratisation in Africa has been in place the longest, with 455 alumni across the continent. 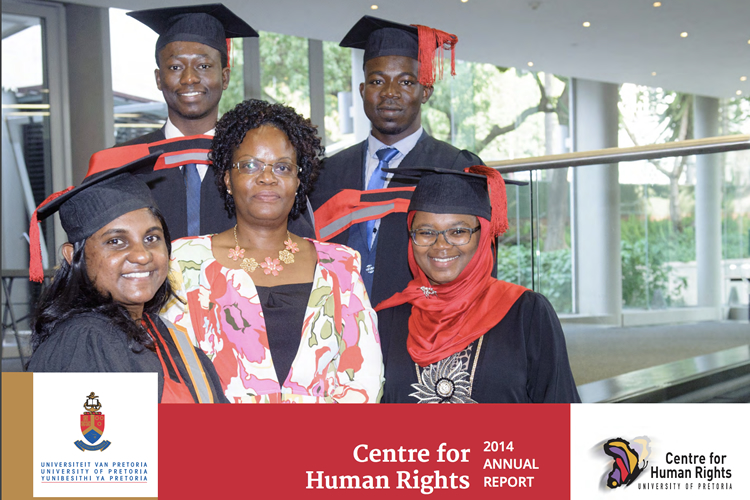 In 2014 the Centre continued towards its primary aim of strengthening human rights in Africa, with a particular focus on supporting and improving the African regional human rights system, established under the auspices of the African Union (AU).  In addition to working closely with a number of mechanisms of the African Commission, the Centre also supports the mandate of two UN Special Rapporteurs, the one on Extrajudicial, Summary and Arbitrary Executions (Professor Christof Heyns) and the one on the Human Rights Situation in Eritrea (Ms Sheila Keetharuth). 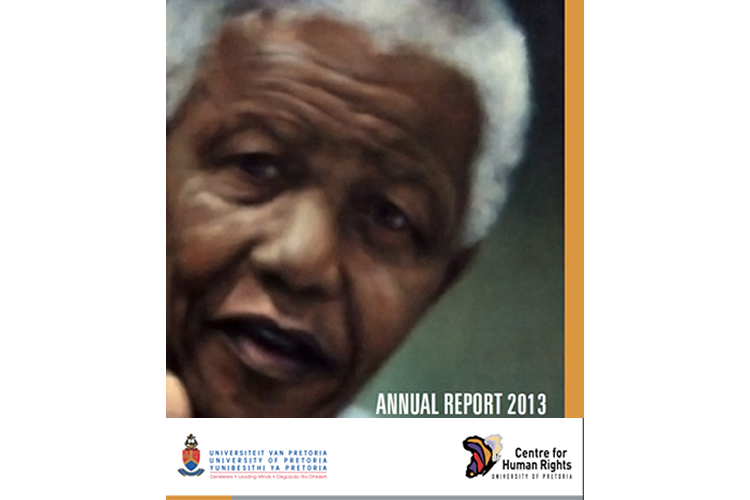 The year 2013 provided numerous highlights: As an academic department, the Centre once again presented the Master’s programme in Human Rights and Democratisation in Africa. Twenty-six students from 19 countries graduated on 10 December 2013. This programme, which started as a Master’s in Law (LLM) in 2000, was changed in 2013 to also allow non-lawyers onto the programme, who graduate with the degree MPhil. A total of two students graduated on the Master’s in Multidisciplinary Human Rights. Four doctoral students graduated in 2013, including one of the Centre’s long-standing staff members, Martin Nsibirwa. 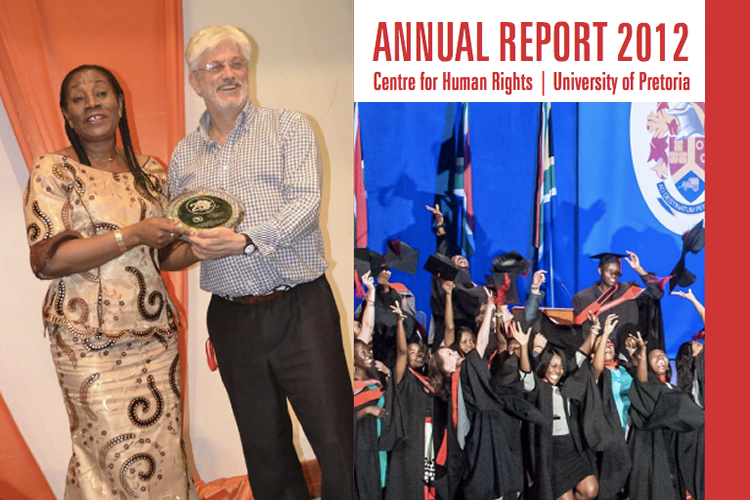 As this Annual Report testifies, the Centre was in 2012 as busy as ever with academic programmes and a variety of projects aimed at promoting and protecting human rights in Africa. Two highlights should be mentioned. The first is the coming of age of the African Human Rights Moot Court Competition. The Moot turned 21 in Maputo, Mozambique, as the Law Faculty of Eduardo Mondlane University became the first of the hosting institutions to organise the Moot for the second time.

The second highlight is the award, by the African Commission on Human and Peoples’ Rights, of its NGO Human Rights Prize to the Centre, on the occasion of the Commission’s 25-year anniversary. Through this award, the Commission not only recognised the Centre’s role in supporting and collaborating with the African Commission (for example, by placing interns, publishing its ‘law reports’, co-hosting the Moot Court Competition, and supporting the mandate of various Special Rapporteurs), but it also acknowledged the contribution of the Centre’s extended family. This family consists of the partner institutions with whom we have over the years collaborated on the LLM (Human Rights and Democratisation in Africa) and the Moot, as well as the LLM graduates. These graduates are not only agents for change and activists for human rights all over the continent but are also the face of the Centre to the world. 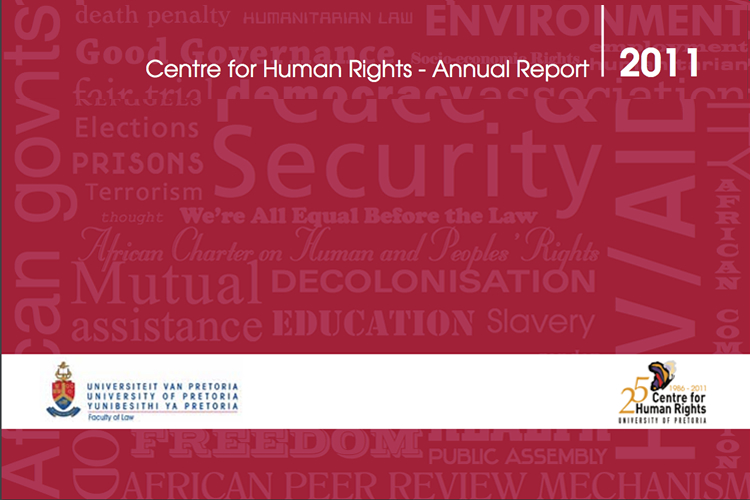 In 2011, the Centre looked back at its beginning, in 1986, the dark days of apartheid at a whites-only university. A conference on the possibilities of social justice, constitutionalism and a bill of rights in a future South Africa brought together an unlikely group of people, from all political perspectives – including those fiercely critical of the government of the day. Following the conference, Johann van der Westhuizen, then professor and head of department in the Faculty of Law, and other colleagues at the University of Pretoria founded the Centre. 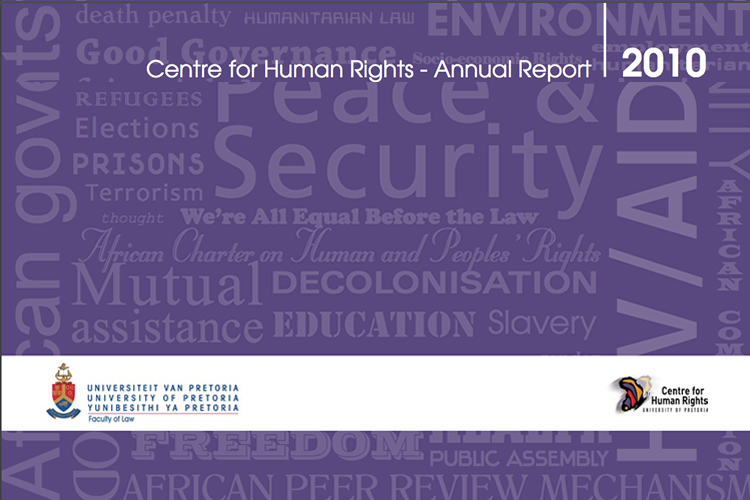 The year 2010 started on a very sad note for us at the Centre for Human Rights, when Gill Jacot Guillarmod passed away on 15 January after a brief period of illness. Gill was our respected and inspirational senior liaison officer. Gill was also our dear friend, trusted confidante, the beloved grandmother to our children, and the core of our social being. More than anyone else, she symbolised the kind heart and the sincere humaneness to which we as a Centre aspire. 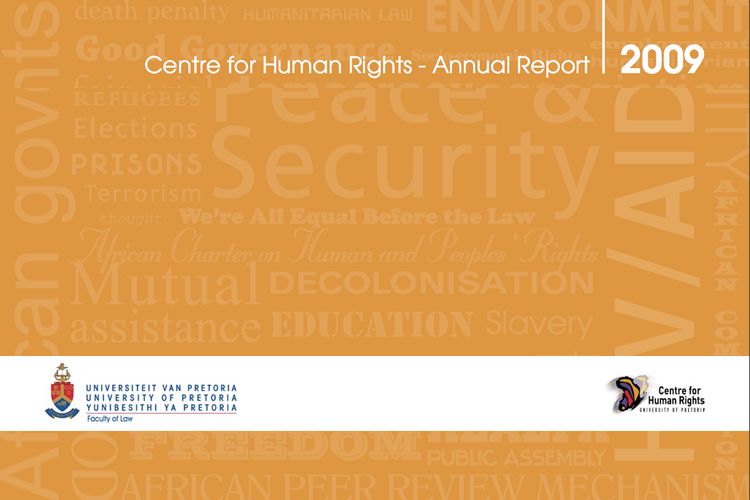 The year 2009 was dominated by the ten-year celebration of one of the flagship programmes of the Centre, the LLM (Human Rights and Democratisation in Africa). The highlight was the annual partners’ conference and graduation, which this year saw the participation of more than eighty alumni of the programme. As has become customary, the class of 2009 graduated on 10 December. Four doctoral candidates of the Centre also graduated. On that occasion, an honorary doctorate was awarded to the United Nations High Commissioner for Human Rights, Justice Navi Pillay. 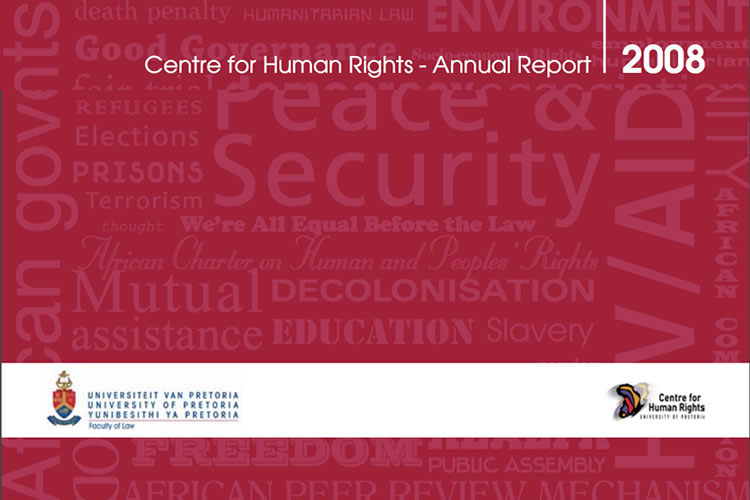 Since its formal recognition as an academic department in the Faculty of Law, the Centre for Human Rights has been able to invest its efforts in both formal academic programmes, on the one hand, and research, advocacy and less formal human rights teaching and training, on the other. The Centre continued with the Master’s in Human Rights and Democratisation in Africa, again preparing 30 of Africa’s most talented young lawyers to make a difference within the sphere of international human rights law in Africa. 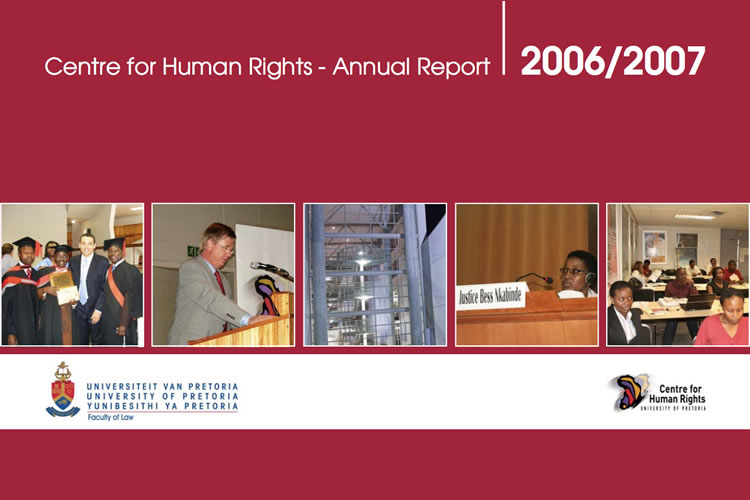 During 2006 the Centre for Human Rights consolidated the shift of its focus of the last few years to a more explicit academic one, which culminated in the Centre becoming a fully-fledged academic department of the Faculty of Law. It was particularly gratifying that the work of the Centre over many years was recognised by the United Nations, when the Director-General of UNESCO announced on 10 December 2006 that the Centre had won the UNESCO Prize for Human Rights Education. 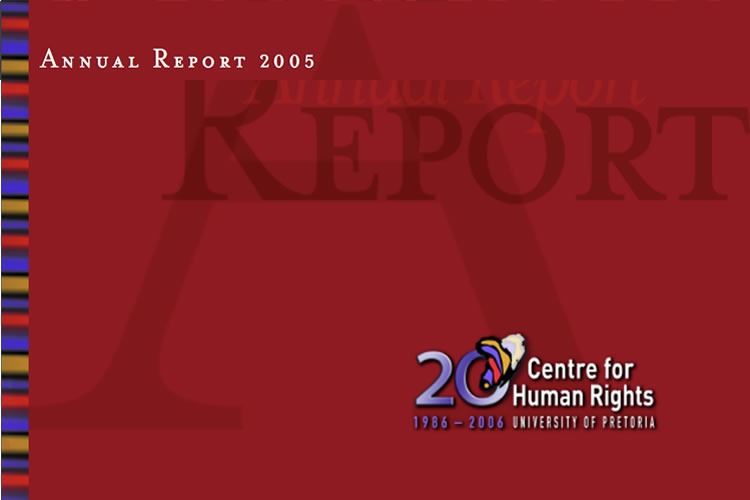 In January 2005, the Centre moved to its new offices and it now occupies two floors in the new Faculty of Law building of the UP. The move to a modern building, next to the Oliver R Tambo Law Library, was widely considered to be a huge improvement. The Masters’ programmes in human rights and trade and the short courses on good governance had full intakes, and brought outstanding lecturers and students from around Africa and abroad to Pretoria. 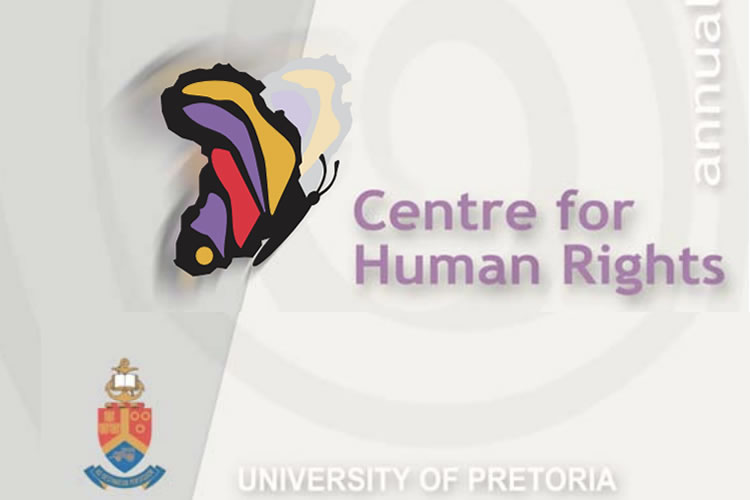 The year 2003 saw the consolidation and expansion of several projects at the Centre for Human Rights, as reflected in these pages. The Centre now has a strong focus on academic issues, and in addition to Master’s Programmes and courses, an increasing stream of publications on Human Rights Law in Africa is emanating from the Centre. 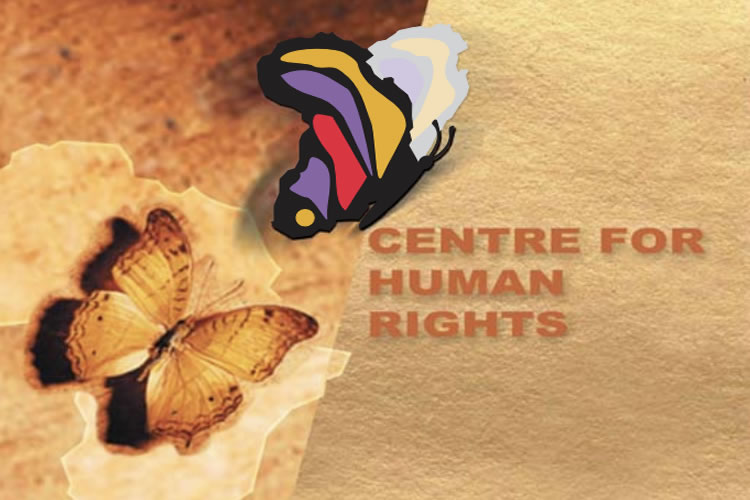 2002 saw the consolidation and expansion of several projects at the Centre for Human Rights.
Highlights involved the following: The African Human Rights Moot Court Competition was held for the 11th time and took place in Cairo; the continental LLM in Human Rights and Democratisation had its third intake; the Centre hosted the Jessup Competition and the Integrated Bar Project again placed about 150 senior black law students on internships with law firms. 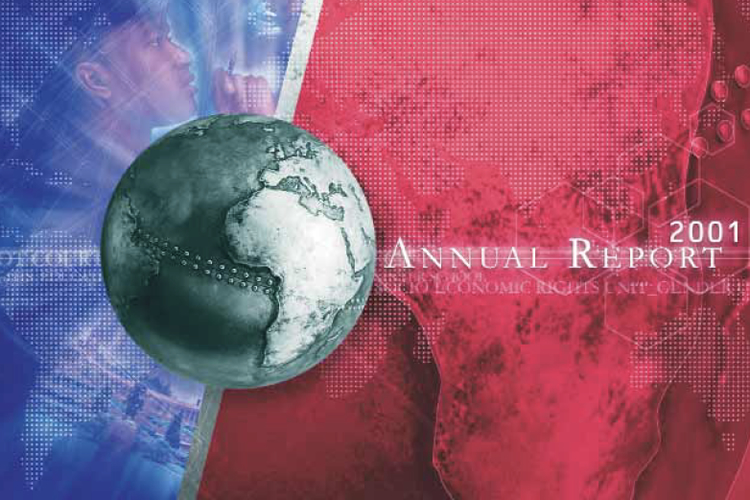