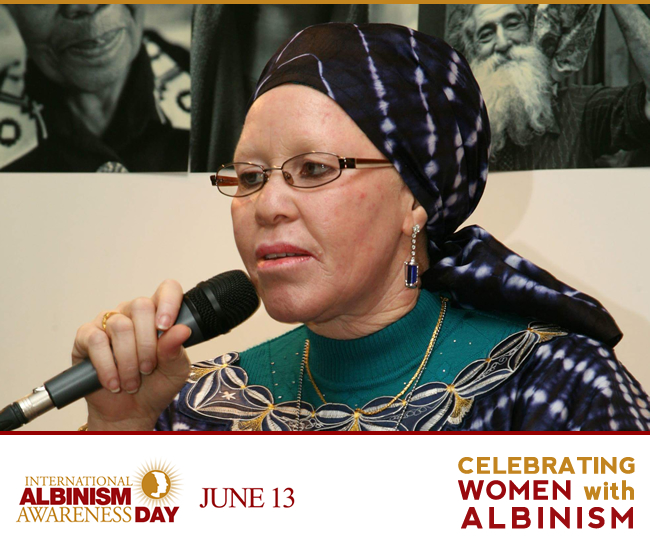 I was born in the coastal region of Tanzania in a place called Tanga but raised in many regions as my father moved a lot due to his various job opportunities. My childhood home was loving and I received extra care and attention due to my condition. We are nine children, five boys and three girls and only three of us have albinism. I never experienced any violence or discrimination in my family at all.I was loved and cared for.

As a young girl going to primary school, I found it very difficult as I encountered so many challenges in class. I was never comfortable in school as people spat on me and constantly pitched me because they noticed that my skin would always turn red when they did and they found this funny.

As a teenager I was afraid of relationships, I always thought boys wanted to use me and to avoid all that I kept to myself and was mostly with family. But as a result of this, I never had to deal with peer pressure which was a good thing.

My proudest achievements have been in my professional life. As a member of parliament I have served on the women’s caucus as a treasurer and signatory. I was appointed by the president to the Tanzanian Constitution Review Commission. I was a committee member on the Committee of the Natural resources and environment. Because of my work, I have been invited to contribute to important forums such as the UN Durban Review Conference that took place in Geneva where I spoke on behalf of the Late Nelson Mandela, Former President of South Africa.

The challenges I have encountered have been people talking about me on the streets, while carrying out my work in the villages there has always been fear of being alone and I have always made sure I am with a partner as it is not safe. But as person with albinism I do not want us to focus on the challenges anymore but change the subject of albinism. I want to focus on the future, a better life and education.

In the future I hopes that awareness continues because I want to continue spreading awareness and advocating for inclusion of persons with albinism in society.

Young girl with Albinism, focus on your health first and then your education second. Do not give up because of the discrimination.