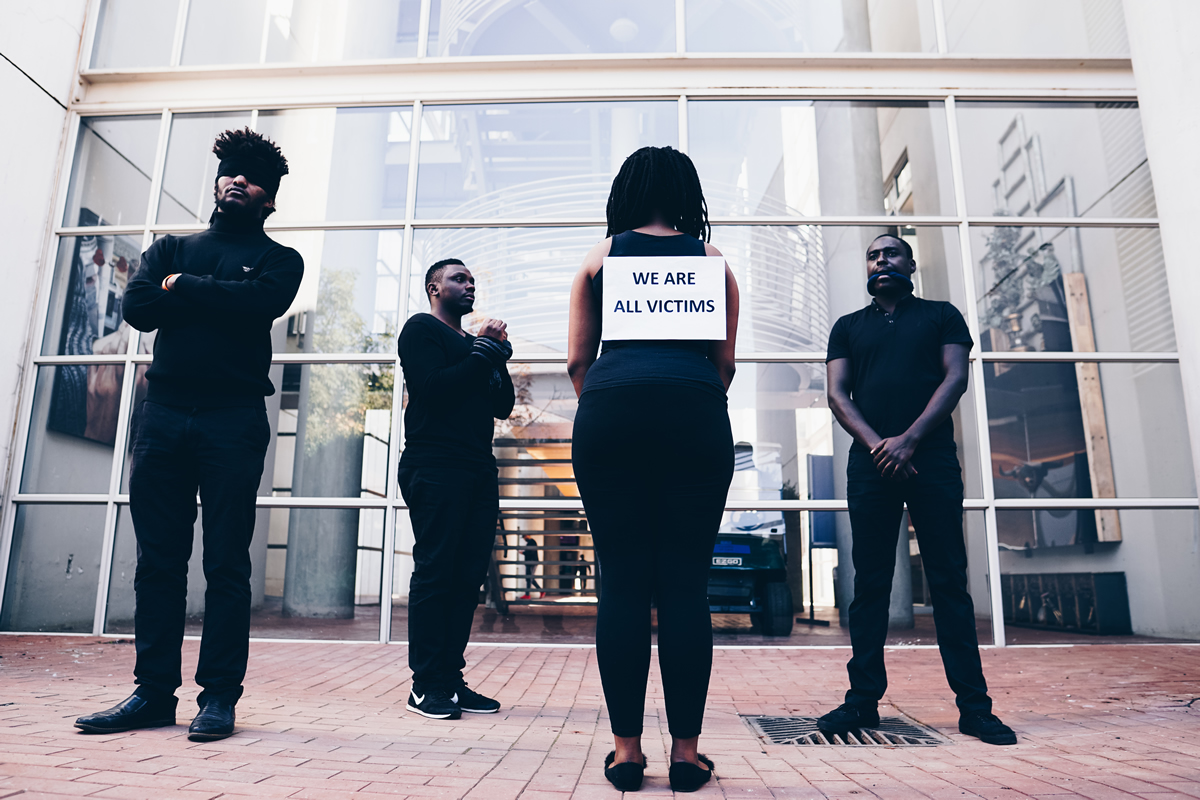 The Centre for Human Rights, Faculty of Law, University of Pretoria, is extremely concerned about the continuing human rights violations in the North-West and South-West regions of Cameroon, and the lack of international alarm and action about the situation.   Available evidence strongly suggests that crimes against humanity have been and are being committed in the English-speaking regions of Cameroon.

Following non-violent protests and demonstrations by Cameroonians in these regions against the government’s policy of assimilation and discrimination towards that community, the Cameroonian government in October 2016 started brutal crackdowns on these peaceful protests. Since then, the region has witnessed enforced disappearance, arbitrary detention under deplorable conditions, prohibition of peaceful demonstrations and constant insecurity. This has led to the displacement of a significant number of Cameroonians who originate from these regions to Nigeria and thousands of internally displaced persons since the beginning of the crisis without means of subsistence and access to basic necessities.

The Centre has submitted a complaint under the UN Human Rights Council procedure alleging consistent patterns of gross and reliably attested human rights violations in Cameroon, and has drawn the attention of four UN special procedures (the UN Special Rapporteurs on extrajudicial, summary or arbitrary executions, on Torture and Minority Issues; and the UN Working Group on Arbitrary Detention) to the situation in Cameroon.

Reliable information is difficult to come by due to severe restrictions on freedom of expression and access to information. However, multiple reports reaching us suggest that government forces are engaged in widespread and systematic violations against the population of the English-speaking regions, including through killing of unarmed civilians. There is therefore an urgent need for an independent international investigation, to be established under the auspices of the African Union or the United Nations to investigate these allegations, and for appropriate action to be taken.

So far, the government of Cameroon has refused repeated requests to allow the African Commission on Human and Peoples’ Rights, or UN and other bodies to carry out an investigation, have access to the thousands of detainees or offer humanitarian assistance to the thousands of internally displaced Anglophones who have been forced to take refuge in the forests and bushes to escape from the army onslaught.

After examining Cameroon’s periodic report under the Convention against Torture, the UN Committee against Torture in November 2017 called on Cameroon to authorise a visit by the UN special procedures (CAT/C/CMR/CO/5, 18 December 2017, para 42).  In its national report for the Universal Periodic Review, which took place in March 2018, Cameroon reports that it has extended standing invitations to UN treaty bodies and special procedures. Cameroon has indeed, on 15 September 2015, made such a standing invitation to UN human rights bodies. The refusal to authorise the African Commission’s visit contradicts the Cameroon government’s previous commitments.

The crisis in the two English-speaking regions of Cameroon started in October 2016, following a series of sit-in strikes and protests. In response to government action, schools and courts in the two regions were boycotted.  The government’s response to the strikes and protest action in 2016 was to order the army and security forces to violently disperse protesters; and to try forcing children to go back to school. Instead of entering into dialogue with the people in the two regions, the government authorised troops to use lethal force against unarmed protesters.  It also abducted and detained thousands at unknown destinations incommunicado for months; and arrested and prosecuted most of the leaders. As a result of the widespread continuous use of force to deal with the deteriorating security situation, many groups of frustrated and traumatised Anglophone youths in desperation are said to have taken up traditional hunting guns, machetes and sticks to defend themselves and their families against a fully armed Cameroonian army operating under instructions to shoot and kill.

It is worth noting that the crisis came after decades of complaints and petitions by these English-speaking minorities of systematic marginalisation that had resulted in little economic and infrastructural development in the two regions, the appointment to their regions of French-speaking administrators who spoke little English and hardly understood the culture of the people. More generally, the progressive introduction of measures to replace the legal and educational system of the English-speaking Cameroonians with the French system, based on petitions and complaints brought before various international fora gave the impression of systematic oppression and re-colonisation.

The African Commission for Human and Peoples’ Rights in Gunme v Cameroon, in 2009 held the government in violation of various provisions of the African Charter on Human and Peoples’ Rights, and recommended that the government ‘abolishes all discriminatory practices’ against people of Northwest and Southwest Cameroon’, and to ‘stop the transfer of accused persons from the Anglophone provinces for trial in the Francophone provinces’. Most pertinently, it called on the Cameroonian government to ‘enter into constructive dialogue with the complainants, to resolve the constitutional issues, as well as grievances which could threaten national unity’. However, these recommendations have never been implemented.

Because of the arbitrary and indiscriminate killing of unarmed civilians, particularly women and children, most of the Anglophones are now calling for a restoration of the independence of the former Southern Cameroons. Some of the youths have gone further to declare the former Southern Cameroons as the independent state of Ambazonia. In response to this, President Paul Biya in November 2017 declared a war against the pro-restoration movement, authorised the French-speaking Governors of the two regions to impose severe restrictions on all movements and sent in the army with a blanket authority to use lethal force and take any other such measures that they deem necessary to restore order.

The current crisis reflects a deep malaise in the body politics of Cameroon. It should be recalled that President Biya, now 85 years old, has been in power since 1975, first as Prime Minister; and since 1982 as President, making his 42 completed years at the helm the longest period any African leader has served. In 2008, the Constitution was amended to abolish Presidential term limits. The President is often accused of being absent. Cabinet meetings are only held very irregularly, exemplifying a political culture seriously lacking in accountability and transparency.

The consequences of the action of the Cameroon government in the two regions are having such dire consequences that it should shock the conscience of the world. Unfortunately, because of severe media and access restrictions to the two regions by the government, the world is not aware of the massive atrocities being committed under the pretext of keeping the country united.

From information collected through media reports, statements, African Union documents and United Nations documents (available on www.chr.up.ac.za/StopCameroonViolations) we aim to draw wide attention to some of the facts about what is presently happening in Cameroon; particularly, the serious and massive human rights violations being committed by the government.  Many of these facts also appear from the process of UN human rights treaty bodies examining Cameroon’s periodic reports (see the Concluding Observations of the UN Human Rights Committee, CCPR/C/CMR/CO/5, 30 November 2017; and Concluding Observations of the CAT Committee, CAT/C/CMR/CO/5, 18 December 2017).

These violations include the following:

There is also evidence that some of the armed groups fighting for the restoration of statehood to the former Southern Cameroons or the new state of Amazonia, as they call it, have committed some human rights violations, which include kidnapping of government officials; and hit and run attacks on government soldiers.

The Centre for Human Rights is concerned that the situation is deteriorating each day and there is growing evidence of crimes against humanity being committed. The Cameroonian army has not only occupied the two English speaking regions but operates under the assumption that any young man is a “restorationist” or “secessionist” or “terrorist” and may on that basis be targeted.

We want once again to point out that the government of Cameroon has ignored the African Commission for Human and Peoples’ Rights’ finding in the Kelvin Gunme case where the legitimate claim of the peoples of Southern Cameroons as a distinct people (para 178) was recognised and a series of recommendations made. These required the government to engage with the people of Southern Cameroons in constructive dialogue to resolve the constitutional issues and grievances of these people. The Cameroon government has consistently manifested bad faith in doing so. For example, the evidence we have so far is of the government creating commissions of people appointed by it to look into the problem instead of talking directly with the leaders of the English-speaking Cameroonian community.

Addressing this issue is a matter of great urgency. The courts in the two regions are hardly functioning. Children are being deprived of their right to education because schools have been closed for almost 3 years. The economy of these regions has been paralysed and the military occupation and arbitrary killings and destruction of villages lends credence to a narrative of a Francophone government project to colonise, subjugate and assimilate the English-speaking part of the country. The longer the world delays in intervening, the greater the chances of a re-colonisation of the territory of the former Southern Cameroons.

Because of this mounting evidence of crimes against humanity against the English-speaking people of Cameroon, the Centre for Human Rights makes the following call:

Two opportunities for engagement on the Cameroonian issue present themselves in the near future: The upcoming African Union Summit of 27 June to 4 July 2018; and the upcoming regular Human Rights Council, starting on 18 June 2018.CONCLUSION

Action is required now. There will be no excuse later that we did not know now!