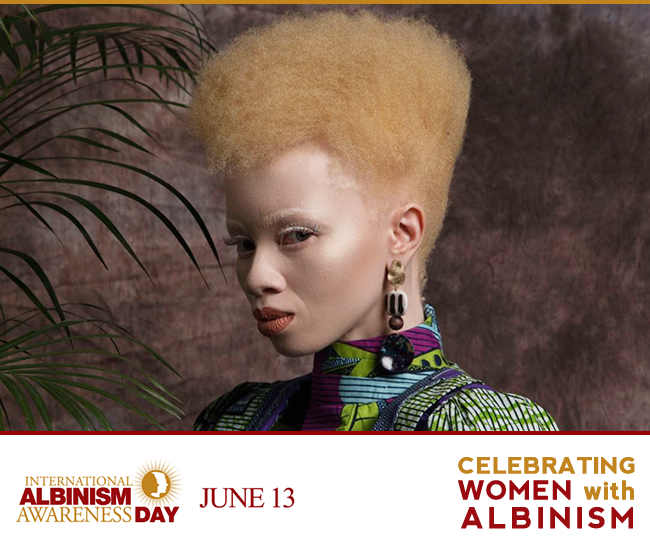 I was born in Sebokeng and raised in Lenasia South. Growing up I had two older siblings, extremely supportive parents and a loving grandmother who played a massive role in my upbringing. I had a lovely childhood which was filled with love and a whole lot of singing.

The issues began when I started the first grade. I went to a public school which had a lot of students. It was here where I started to notice that I had a different pigment to everyone else. In high school my insecurities began to manifest, I continuously tried to hide my albinism so that I could be like all the other children to the extent that I walked around in the sun without my cricket hat because people were making fun of me for the hat. My mother was so angry.

Modelling has been the one thing that made me reflect and dig deep into my self-esteem, to question my motives for wanting to alter my appearance.Being on the cover of Marie Clairewas an awesome experience. To be on the cover of a reputable magazine and to look the way I looked.I didn’t have to colour in my eyebrows,my hair was in its natural afro state.I felt that it showed a positive image for black children growing up with albinism to have someone on the cover that looks like them,I appreciated the fact that I was not required to look like what society perceives to be the perfect cover girl look. Marie Clairehelped me express my truth in this respect.

I have had to be creative in navigating my way through the world as a person who is considered to be legally blind. I experience limitations in the industry as well.Acting is my main love, however the roles that come to me are very boxing and limiting in their very nature often having prejudices and supernatural connotations.I is never just presented with a role that requires me to be a doctor or a lawyer like actors and actresses normally receive.

The recent Pirelli calendar with P.Diddy, Naomi Campbell and Whoopi Goldberg was a huge accomplishment for me.To be featured as the first South African and to look the way I wanted, it was on my terms.I was the only task member asked to write on the calendar, the only other person was the editor of the French Vogue.I went in as a model and representative for South Africa, albinism, blackness and womanhood and found my space as a writer. It was serendipitous.

The words we use in our indigenous languages to refer to people with albinism are derogatory and offensive.We should develop our languages to ensure that the correct terminology is used without offending people.It is pertinent that we look into this. Commissioner Nomsonto  Mazibuko presented a term recently ‘Abantu be fuzo’, in isiZulu. Without these developments, our right to dignity and equality will continue to be encroached upon.

I would like to get to a point where we feel the fullness of our human agency, where we can navigate the things that we do without having to fight so many barriers. The more fluid I am in my career and society, the more I know that the work I have done is worthwhile. I am beginning to see it and I will not stop until we are in a place where the new generation does not have to work as hard as I did to break through barriers.