Women’s Rights Unit host a dynamic group of activists from the United States who are on an educational and cultural exchange tour. 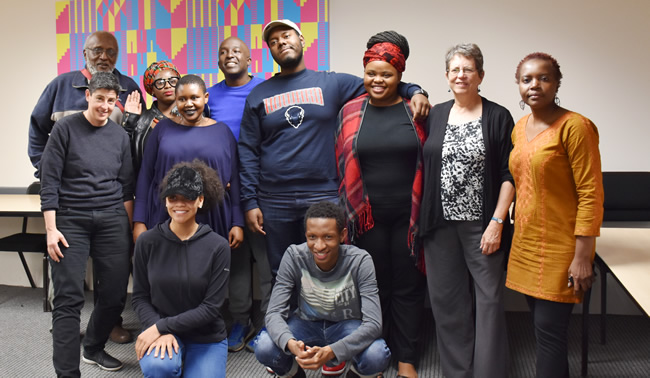 On Thursday 8 June 2017, the Women’s Rights Unit hosted a dynamic group of activists from the United States who are on an educational and cultural exchange tour. They visited the Centre for Human rights to engage on issues of historical injustice, state violence, truth and the rule of law. The meeting had in attendance members of the Centre’s management team as well as representatives from the Sexual Orientation and Gender Identity and Expression Unit, the Disability Rights Unit and the Women’s Rights Unit. The guests were also a diverse mix of educators, activists, legal practitioners and students, having come under the umbrella of an organisation called ‘Making the Road’. This organisation focuses on forging new paths and understandings through conversations that connect America and Southern Africa, history to the present, and different generations to one another.

This convergence was an opportunity for the US activists to learn more about the work of the Centre through its different units but also gave the activists an opportunity to connect and share experiences with student movements within the wider university involved in advocating for social justice and activism to end violence against women on campus.
The conversation revolved around discrimination and infringements of the rights of sexual minority groups and persons living with disabilities and gave particular focus to issues of violence against women on campus. Interesting to note were the similarities in problems of rights violation, discrimination and violence being faced by people within the different country context. The student activists specifically spoke on the following issues:
In this regard, there was a consensus that the University must play a more proactive role in engendering a campus culture of non-violence through education and more strategic interventions that include forming alliances with external bodies who are able to intervene and get the student the needed support. Student led initiatives such as the ‘consent rocks’ were also proposed to raise awareness on the critical issue of consent. Consequently, the US activists promised to share best practices regarding the aforementioned issues and also link the Centre with other organisations that can provide support to the University in tackling the issue of sexual violence on campus.
The Centre is an academic department and NGO at the Faculty of Law, University of Pretoria
Copyright © 1986 - 2019 Centre for Human Rights
To Top