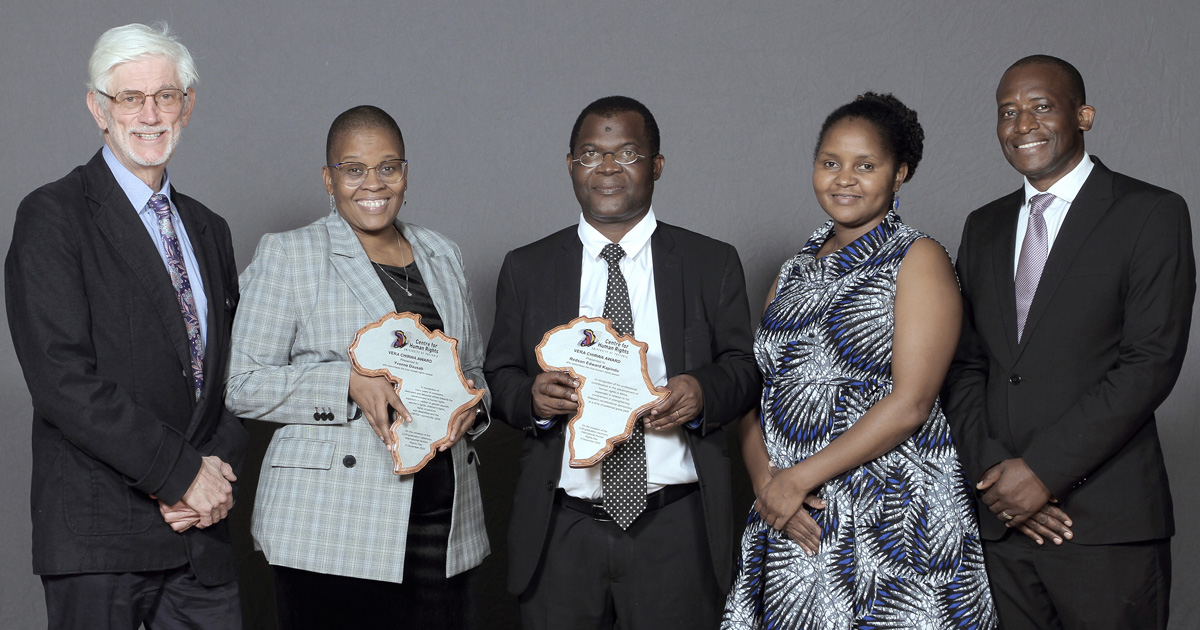 The Centre for Human Rights (Centre), Faculty of Law, University of Pretoria, selected Namibian Minister of Justice, Honourable Yvonne Dausab, and Malawian human rights advocate and High Court Judge, Justice Redson Edward Kapindu, to jointly receive the 2022 Vera Chirwa Award.  This Award, instituted in 2006, acknowledges and honours an alumnus or alumna of the LLM/MPhil in Human Rights and Democratisation in Africa (HRDA) who best embodies the spirit of the programme in their subsequent career by positively contributing to human rights or by promoting consolidation of democratic values in Africa.

Yvonne Dausab graduated from the HRDA programme in 2001. She is a former Chairperson of the Namibian Law Reform and Development Commission. She has also served as a full-time lecturer at the University of Namibia, where she later became the Deputy Dean of the Faculty of Law. In March 2022, the President of the Republic of Namibia appointed her as Minister of Justice. The Award was made in recognition of her work in advocating for human rights, especially, women’s rights, children’s rights, rights of persons with disabilities as well as the LGBTQI+ community in Namibia and across Africa.

Redson Kapindu completed the HRDA programme in 2004. He is a Judge-in-Charge, of the newly established Financial and Economic Crimes Division, at the High Court of Malawi. He is also a visiting Professor of Law at the University of Johannesburg and a part-time Associate Professor of Law at the University of Malawi. The Award was made in recognition of his work in advancing human rights, especially socio-economic rights and political rights, in Malawi and across the African continent.  Justice Kapindu has been involved in many decisions in Malawi with a significant impact on the consolidation of democracy and advancement of human rights in Malawi, in particular Chilima & Another v Mutharika & Another  (Constitutional Reference 1 of 2019) [2020] MWHC 2 (3 February 2020); in which the High Court declared the 2019-2020 presidential elections invalid. His involvement played a very significant part in strengthening Malawi’s constitutional democracy at a time of potential great peril.

The Vera Chirwa Award was named after Malawi’s first female lawyer and human rights activist, Vera Mlangazua Chirwa. She is best known for her fight against authoritarianism and her commitment towards human rights in Malawi. Under the regime of Hastings Kamuzu Banda, Vera Chirwa was tried and sentenced to death. Her husband, Orton Chirwa, and herself were both tortured, received inadequate food and were denied proper medical attention, which later led to the death of Orton. She was released on 23 January 1993 after having spent 12 years in prison. She did not give up on human rights activism and later became a member of the African Commission on Human and Peoples’ Rights in 2000 as its Special Rapporteur on Prison Conditions in Africa.

Since the Annual Award was instituted in 2006, it has been awarded 16 times to the following 22 alumni of the HRDA programme:

‘Sometimes, an award is not a token of great work achieved but rather, the potential of greater courage contemplated for work envisaged for the future. This Award is for all of us for the little we do to make this world, this continent and our countries a better place to live in’, said Honourable Dausab during her speech when she received the Award.

‘The Award shall remain a constant reminder that a sustainably developmental, democratic, non-racial, non-sexist, non-class-based and corrupt-free Africa, based on the values of respect for Ubuntu and human dignity, remains achievable, but that at present, we should be realistic to admit as a continent, that we are not there yet’, said Justice Kapindu upon receipt of the Vera Chirwa Award.

The Vera Chirwa Award is presented annually on the occasion of the HRDA Graduation Ceremony, which coincides with International Human Rights Day. This year’s event, marking the graduation of the class of 2022, was held at the University of Pretoria on Friday 9 December.  The HRDA programme is presented by the Centre, in close collaboration with twelve law schools across the continent.

More than 600 HRDA alumni have graduated from this programme.

The Director of the Centre, Professor Frans Viljoen, congratulating the recipients, noted: ‘Minister Dausab and Justice Kapindu are shining examples of a rare breed of members of the executive and judiciary in African countries who devote themselves to advance human rights and strengthen democracy. I have no doubt that their courage and resolve will inspire the Class of 2022 and all our graduates. Our best wishes accompany them on the road ahead.’