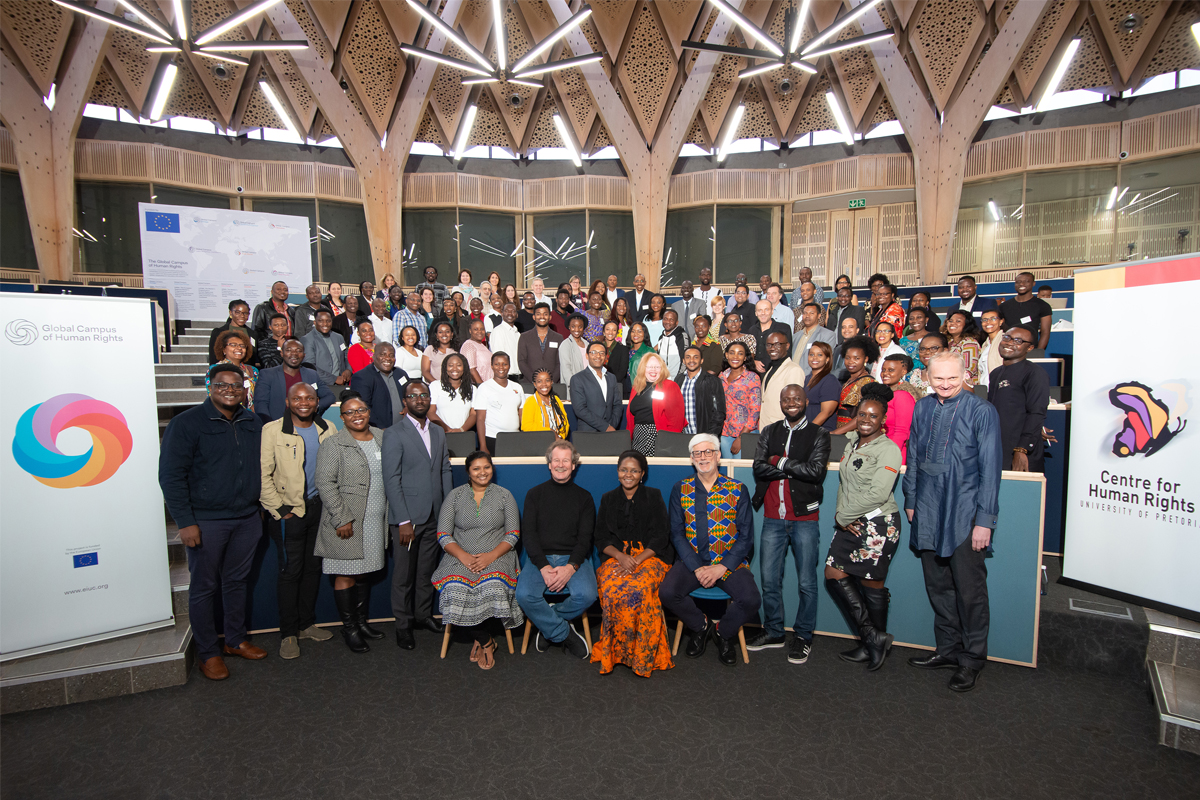 Participants included a number of HRDA alumni from 2000 to 2018, the HRDA class of 2019, representatives of the programme’s twelve partner universities, and the Global Campus of Human Rights partners. Prof Manfred Nowak, the Secretary-General of the Global Campus was also in attendance.

Prof Frans Viljoen, Director of the Centre for Human Rights, in his welcoming address reflected on the significance of hosting the #HRDA20Years events at Future Africa. He noted how the Future Africa campus, seen as a space for multidisciplinary research and deliberations, can now also be regarded as an extension of the space of South Street (where HRDA students used to reside), as students will now reside at Future Africa from 2020 onwards.

After a round of introductions, the curriculum of the HRDA programme was discussed.  Prof Magnus Killander led the discussion on curriculum revision, which included issues such as the need to respond more to current challenges, the integration of broader teaching approaches, the inclusion of possible electives and the need to accommodate the diversity of the continent. Criticism that the democratisation component of the programme has not received enough attention should also be addressed with the addition of governance, leadership, democratisation in the digital age (digital verification) and corruption into the curriculum. Other issues that were discussed included the profile of the graduates, shifting from theory to practice, adding new thematic areas, strengthening the French classes and diversifying internships.

The discussion was followed by reflections on the United Nations and African Union mechanisms and how alumni could possibly collaborate within these systems. Dr Solomon Dersso (newly elected Chairperson of the African Commission on Human and Peoples’ Rights and alumnus from 2003) and Meskerem Geset Techane (Chairperson of the UN Working Group on Discrimination against Women and Girls and alumna from 2011) spoke about their experiences after graduating on the HRDA programme and how it aided them in their work in relation to the protection of human rights in Africa. They also highlighted the need to overcome institutional barriers and thinking about the future agenda of the human rights movement in Africa.

The Centre launched its 2020 campaign on technologies and human rights, with the intention to mainstream technology into the core objectives of the Centre. It is also looking into litigation on digital rights, for example with a focus on internet shutdowns that have been rampant in a number of African States, as they have resulted in a violation of various fundamental rights like access to information and freedom of expression. Dr Thompson Chengeta (alumnus from 2011) called on more African organisations to join the campaign for maintaining human control over machines. Solomon Dersso also invited suggestions for bringing the African Commission into the fold. Meskerem Geset Techane indicated that it was a cross-cutting issue on her mandate and invited engagements on that level.

Two parallel sessions were held on a number of thematic areas. The first set of breakaway sessions were designed thematically according to some of the thematic research units of the Centre. Participants were divided into 6 groups with each person choosing a group that is of most interest to them. The groups dealt with women’s rights, children’s rights, sexual minorities’ rights, disability rights, elections and democracy as well as freedom of expression. The participants discussed emerging issues in their respective areas as well as points of possible collaboration.

The second parallel session phase resulted in the participants being broken up according to different professions. There were thus 5 sessions on litigation, academia and research, advocacy, judiciary and civil society organisations. Similarly, the groups discussed trends and pertinent issues in the professional areas and explored possible collaboration opportunities.

The Symposium was followed by an Alumni Gala Dinner at the Gallery of Leaders, Freedom Park. The Centre made special mention of illustrious alumni who have done exceedingly well on human rights championing in their different fields, from inter-governmental organisations to work in their own countries. Words of solidarity and congratulations were given by the Dean of the Faculty of Law, Prof Elsabe Schoeman as well as the Secretary-General of the Global Campus, Prof. Manfred Nowak. The dinner also saw the launch of the 20-year edition of the Alumni Diaries, which is a publication that captures the various graduates that have passed through the programme and what they have since done with their acquired knowledge.