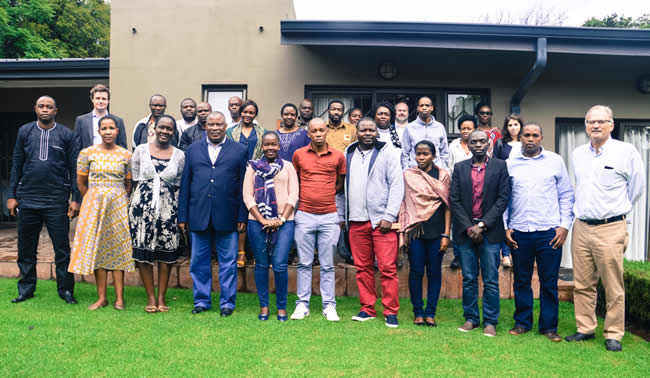 The right to life is often described as a supreme human right, but it is clearly under pressure worldwide.The Centre for Human Rights, University of Pretoria for the first time hosted its first annual short course on the right to life from 10-13April 2017. The course brought together several participants from across Africa, mainly representing civil society, national human rights institutions, police officers, prosecutors and academia.

Article 4 of the African Charter on Human and People’s Rights states that ‘Human beings are inviolable. Every human being shall be entitled to respect for his life and the integrity of his person. No one may be arbitrarily deprived of this right.’The jurisprudence of the African Commission on Human and Peoples’ Rights (the Commission) has widely recognized this right as a foundational right. Without the right to life, other rights cannot be implemented. It is in view of the above that the Commission adopted the General Comment No. 3 during its 57th Ordinary Session held in November in Banjul, The Gambia. The aim of the General Comment is to provide States, National Human Rights Institutions and Civil Society a useful guide to the range of application of Article 4 of the African Charter.Although a vast majority of African States have abolished the death penalty in law or in practice; the Commission notes that international law requires all States that have not formally abolished capital punishment to be taking steps towards abolition.

The main objective of the course is to advance the promotion of respect and protection of the right to life widely recognized as a foundational right.According to the UN Special Rapporteur on extrajudicial, summary or arbitrary executions, Prof Christof Heyns, “The introduction of the course is timely particularly at a time when the right to life is under great pressure and will address several of the burning issues of our time in a progressive and pro-active manner”. The course is aimed at creatinggreater awareness and informed policy-making and legislative action on the right to life issues in African States. The expected outcome was that by the end of the course, participants would have appreciated the current development in the field of the ‘Right to Life’. For example, the death penalty, use of force by law enforcement officials during arrests and demonstrations, deaths, conduct of hostilities and investigations of potential unlawful deaths; new technologies such as drones, cameras, robots, phones, computers, among others.

Day 2:The day commenced with discussions on preparing for large-scale public assemblies from a human rights perspective. Discussions of how the standards related to the use of force and how it can be operationalised were highlighted. It was noted that particular challenges can arise in the context of the policing of assemblies. A briefing on how police officers can be trained to ensure effective awareness and implementation of good practice was conducted as well as discussions of the recent adoption of the ACHPR on Guidelines on the Policing of Assemblies. Commissioner Solomon Dersso and Japhet Biegon explained the implications of the right to life during armed conflict. The broad question of the co-application and complementarity of International Human Rights Law (IHRL) and International Humanitarian Law (IHL) and the implications for the protection of the right to life were posed. Other questions include: whether the IHL is always the framework to use throughout a country in conflict? Is the IHRL automatically the more protective regime? What mechanism should exist for addressing breaches? Mr. Stuart Maslen examined the State’s responsibility to investigate (as part of its broader duty to pursue accountability for right to life violations) including how forensic death investigations can play an important role. The process that culminated in the revision of the Minnesota Protocol as well as the issue of the management of the dead under international humanitarian law was discussed. Finally, Dr Thomas Probert emphasized the implication of violence reduction and the Sustainable Development Goals. His discussions drew upon the inclusion of violence reduction in Goal 16 of the SDGs as well as exploration of the intersections between the development agenda and the protection of the right to life.

Day 3: State’s control over persons held in custody leads to a heightened responsibility for the protection of that person’s right emphasized Sylvie van Lammeren, International Committee of the Red Cross. Deaths in custody, whether caused by violations at the hands of State agents or at the hands of other inmates, or by wider conditions of detention (such as malnutrition or exposure) can amount to violations of the right to life. The session explored ways in which violations occur in Africa and proposed steps to address them. Professor Christof Heyns and Thompson Chengeta addressed challenges posed by new technology on the battlefield and the risks of bringing it home. In his discussion, Prof Christof highlighted the issues raised by the development both of unmanned or other remote weaponry in the first instance as well as the further challenges posed by the concept of ‘autonomous weapons’. He posed the question: whether technology can conform to the relevant international legal standards? If it fails to conform, how can those deploying it be held accountable? Are different issues raised by the possible use of such technology in a law enforcement setting? Participants engaged in practical sessions and discussed implications of significant legislation or jurisprudence from their home States which has either drawn upon or failed to draw upon relevant international standards for the protection of the right to life.

Day 4: Professor Christof Heyns engaged participants on the right to life and debates about abortion/euthanasia. He highlighted the currency of the ‘right to life’/’pro-life’ terminology in the debate about abortion. He noted that the medical procedures before birth as well as those at the other end of lifespan to ease death are topics that should be considered with the human rights debates about the right to life. Mr Thomas Probert and Adebayo Okeowo engaged participants on the use of technologies to pursue accountability for the right to life violations. According to Dr Probert: how can alternative sources of verification on the use of technology on the right to life be found? Can submitted sources of information be verified? Mr Okeowo highlighted the use of information communication technologies for human rights fact-finding as well as the challenges of using digital information as evidence. The issue of human rights abuses perpetrated by non-State actors was pointed as a pervasive threat to the right to life. Dr Stuart Maslen considered the potential implications for the regulation of private security as well and the potential for accountability for such abuses. The extent to which other non-State (or quasi-non-State) actors have human rights responsibilities with respect to the right to life was further considered.

The course was very timely and relevant especially in light of the current use of technology and its effect on the right to life. International Law has advanced and it is important to evaluate how far different states care to enshrine international principles in their domestic laws. Participants from different countries share their experiences and also learn from each other.

Professor Chrisof Heyns pointed on the way forward and noted the opportunity to consider what the main future challenges are. He highlighted the importance of framing a collective agenda as well as the role of teachers and academics in reinforcing the norms and practices around the right to life.

For more information on the short course, please contact: