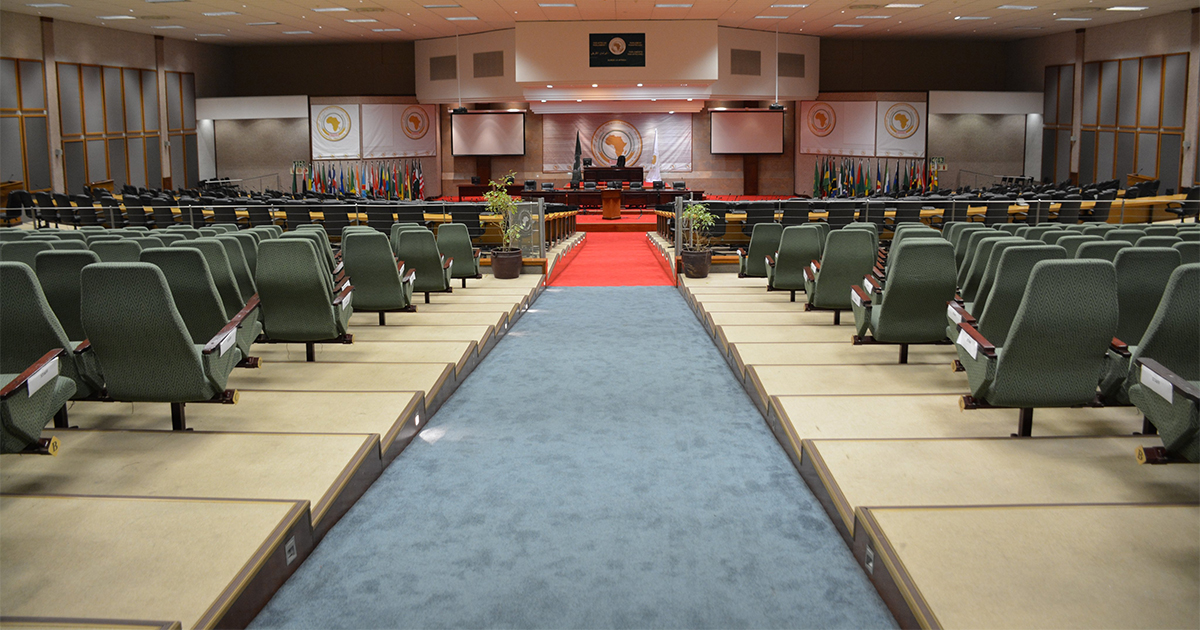 The Centre for Human Rights (CHR), Faculty of Law, University of Pretoria, and the Pan-African Parliament Civil Society Forum (PAP CSO Forum) held a webinar on 9 June 2021, to discuss the recently postponed elections of the PAP, and issues related to the Fourth Ordinary Session of the Fifth Pan-African Parliament (PAP). This virtual event was attended by 180 participants from across the continent.

The CHR and PAP CSO Forum commend the PAP on the strides the Parliament has taken on the continent towards fulfilling its mandate. These strides include efforts to protect vulnerable groups in Africa, the exploration of adoption of model laws on issues such as policing and disability, free movement of African peoples, right to a nationality, elevation for the demand for public accountability, freedom of expression, and interventions through resolutions and recommendations on issues affecting human rights, peace and security, development, and continental integration. However, we note with concern certain issues that affect the functioning of the PAP and pose a threat to the further fulfilment of its mandate.

Implementation of the African Union Principle of Rotation in PAP Bureau Elections: The Principle of Rotation when electing the Bureau of the PAP (consisting of the President and became an issue of contention in the recent sitting of the Parliament (24 May - 1 June 2021), which led to the postponement of elections and the business of the sitting not being completed. This principle is enshrined in article 15 of the Rules of Procedure of the Assembly and the Executive Council, Statutes of the Commission and Rules of Procedure of The Permanent Representatives Committee of the African Union. However, the rule currently does not have a binding effect on the PAP due to the fact that the role of the AU Legal Counsel is merely advisory and not binding on the PAP, which has allowed elections to continue on the basis of all Members of PAP (MPAPs) voting directly for the Bureau positions. In order to have binding force on the PAP, the Principle of Rotation needs to be adopted as part of the Rules of Procedure of the PAP through a two-thirds majority vote. However, this has not yet happened. We urge the Parliament to prioritize this matter as a matter of urgency. The ramifications of the disagreement on the election system are that the business of the PAP has essentially been suspended and the Parliament is operating in a purely administrative capacity. This means that the PAP cannot continue with the business that allows it to fulfil its mandate and work towards policy making and political decisions affecting the continent. A similar position occurred in 2020 due to the COVID-19 pandemic, resulting in the PAP not sitting virtually due to failure to amend the rules of procedure. The continental Parliament cannot afford another year of incapacitation due to an issue of the rules and as such we urge the body to constructively deliberate on the way forward in amending the rules, allowing elections to take place, and capacitating the Parliament for the business of its mandate.

Conduct of the Members of the Pan-African Parliament and Rule 40 of the PAP Rules of Procedure: In line with adherence to the rules and the mandate of the Parliament, we note with concern the behaviour exhibited by some MPAPs including violent outburst, verbal and physical attacks on fellow MPAPs. This behaviour is in contravention of Rule 40 of the PAP’s Rules of Procedure, which outlines how MPAPs ought to conduct themselves during a sitting of the PAP. We urge MPAPs to act in accordance with the decorum outlined in Rule 40 and facilitate for a space that is conducive for constructive debate and disagreement towards the betterment of the African people. We call for the AU and the PAP to take concrete actions to hold MPAPs in violation of Rule 40 accountable and ensure that the PAP remains a space that respects and upholds decency, decorum, democracy, the rule of law, inclusivity, and constructive engagement to resolve the issues of the continent amicably.

Financial Ethics, Implications and Accountability of failed sittings: We note with concern the financial strain on the AU, the PAP and the African continent at large for the failure of the PAP to conduct elections during the most recent sitting. The PAP is one of the AU organs that receives the highest amount of funding, as such it is important for the organ to account for the funding received and how it translates to the benefit of the African people through initiatives of the PAP. We therefore urge the PAP to regard this matter with the gravity it deserves and remedy the issues that have led to the failure to sit lest a situation such as one that occurred in the May sitting repeat itself in August and cost the continent money and resources, which are already scarce and could have been channelled to other priority areas.

CSO Access to the PAP: Civil society is the primary means through which the PAP can forge a link between itself and domestic constituencies in African states. Meaningful engagement between CSOs and the PAP will allow for inclusivity, representation, and meaningful and beneficial interventions to the people we represent. The recent internal squabbles and politicking in the PAP have made it difficult for CSOs to access the PAP as a space to ventilate the pertinent issues affecting constituents. This has had the effect of shrinking the space for civic engagement in the PAP and ultimately affecting the fulfilment of the mandate to be a voice of the African peoples. To this end we urge that the PAP continues to foster avenues for constructive and meaningful engagement with CSOs, in line with Rules 35 and 72 respectively, which assures African citizens access to PAP, and the right to approach the organ by way of petitions.

Political leadership: We also note with concern the lack of able, credible, and trustworthy leadership that have plagued the PAP, which in no small measure contributed to the resulting disagreements and ultimately the investigations into the conduct of the previous president of the PAP. Hon Roger Dang, and the dismissal of the acting clerk, Mr. Jobe, on allegations corruption, abuse of office, sexual harassment and financial mismanagement. These are clear exhibitions of failings of good governance and transparency and ultimately affect the legitimacy and democratic processes of the PAP. It is important therefore, as the PAP respects and implements its Rules, in ensuring that those in violation of codes of conduct in leadership structures are censured. And that reports of any and all investigations that are in the public interest are made public in accordance with Rule 87 (public access to documents).

Ratification of the PAP (amended protocol) Malabo Protocol: The limited ratification of the 2014 Protocol to the Constitutive Act of the African Union relating to the PAP (Malabo Protocol) remains a stumbling block for the PAP’s effectiveness and reform. The slow pace of ratification reflects a lack of political will among the members of the PAP and may also reflect the extent to which MPAPs table the issues of the PAP in their local legislature and the regard with which these are held at this level. The Protocol has key features that will strengthen accountability, transparency and representation through institutional reforms which will further democratic ideals and increase the efficiency of the PAP. We therefore urge the PAP to prioritise the ratification of the Malabo Protocol as an urgent issue on the Parliament’s agenda.

Finally, we continue to call on the PAP to remedy its internal struggles, both political and legal, so that the Parliament can continue to strive towards effectiveness and carry itself as the ideal Parliament of the continent, espousing values of integrity, respect for democratic processes and African unity.

The Centre for Human Rights established a partnership with the PAP through a Memorandum of Understanding signed in October 2017. Key among the objectives of this partnership is facilitating capacity building on human rights and democratisation in Africa, increasing the visibility of the PAP and fostering a strong interaction between the PAP and CSOs on the continent. In May 2019, CSOs agreed on the need to have an effective and sustainable overall Forum or space that would ensure cohesion, coordination and effectiveness in their engagement with the PAP, and also assist the PAP in its outreach and advocacy campaigns, such as for the ratification, domestication and implementation of the AU legal instruments, particularly the PAP Malabo Protocol.

Against this background, the CSO Forum was established with the aim to foster closer collaboration between and among CSOs on PAP-related issues, on the one hand, and between CSOs and the PAP, on the other, with a view to advancing and promoting the mandate of the continental Parliament.