Press Statement: As the contribution of South Africans over the 40 years of the African Charter is celebrated, the government is urged to support African Union human rights bodies 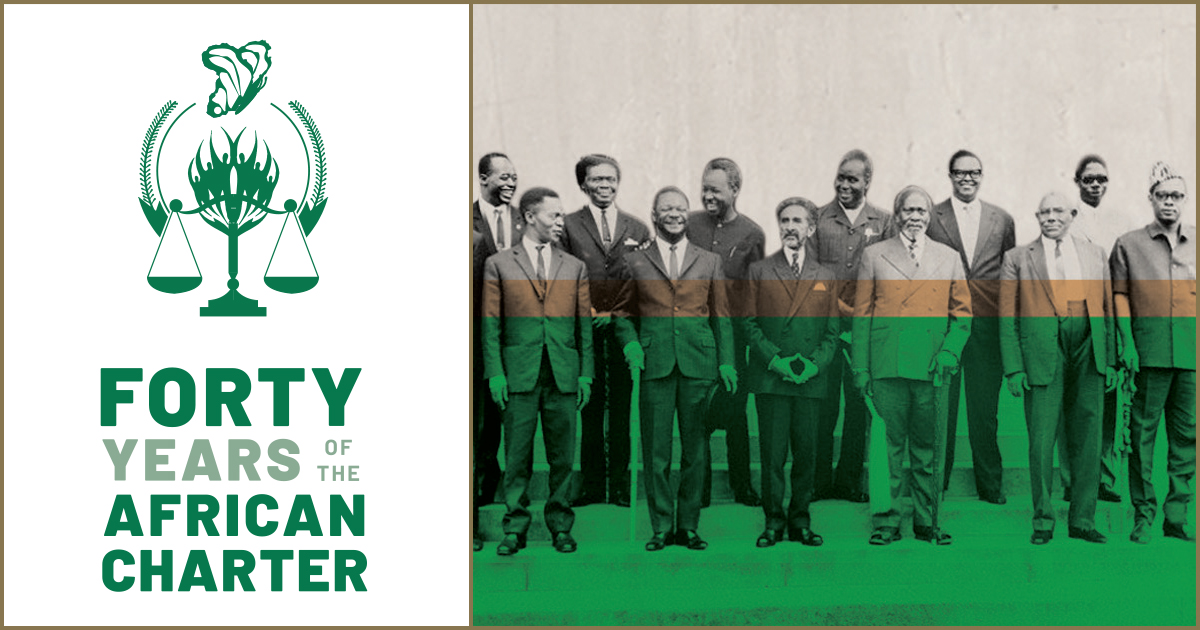 In 2021, Africa commemorates 40 years since the adoption of the African Charter on Human and Peoples’ Rights (African Charter). At a virtual event celebrating this landmark and honouring South Africa’s contributions to the evolution of the Charter, participants expressed disappointment that this milestone received so little attention in the country, particularly from the South African government.

The African Charter is Africa’s most important human rights treaty. It was adopted by the Organisation of African Unity (OAU) on 27 June 1981, as a bulwark against state excess and to ensure that states respect the basic rights of everyone under their jurisdiction. Due to its apartheid policies, South Africa has not become a member of the OAU at the time.

The African Commission was established in 1987 after the African Charter had entered into force. With its headquarters based in Banjul, and with very limited resources, it was up to the elected Commissioners to establish the Commission’s visibility, full functionality – and legitimacy.

Professor Pityana joined the Commission as it started its second decade of operation. During that time, he also became Principal and Vice-Chancellor of the University of South Africa (UNISA). He played a prominent role in forging the Commission’s processes and procedures and was instrumental in extending the Commission’s mandate to cover indigenous peoples’ rights.

Advocate Tlakula, who also served as the Chief Electoral Officer and Chairperson of the South African Electoral Commission, and is currently the Information Regulator of South Africa, left deep footprints in the Commission’s work. As its Special Rapporteur on Freedom of Expression and Access to Information, she was pivotal in the adoption of the AU Model Law on Access to Information. This Model Law guided African states to adopt their own access to information legislation. It stands as testimony to her influential role that the number of states have adopted such legislation grew from 5 to 26 over the term of her tenure.

The African Court on Human and Peoples’ Rights (African Court) was added to complement the Commission’s mandate to decide cases. While the Commission, from a formal perspective, only issues recommendations, the Court gives binding judgments. When the first Judges of this Court were elected in 2006, South Africa nominated Judge Bernard Ngoepe, who at the time was the Judge President of the Gauteng High Court. Judge Ngoepe served from 2006 to 2014, playing a trail-blazing role as one of the Court’s eleven inaugural Judges. Recently, Advocate Dumisa Ntsebeza, who had previously served as a Commissioner of the South African Truth and Reconciliation Commission, was elected to the African Court for a 6-year term.

Professor Pityana, Adv Tlakula and Judge Ngoepe all lamented the lack of exposure and commitment to the African Charter and its institutions in South Africa, generally, and by the South African government, specifically. They identified a regressive trend of decreased commitment to the continental human rights framework, after the initial years of unequivocal support during the Mandela and Mbeki eras. They expressed the hope that the tide may be turning again, in the Ramaphosa era. Issues of particular concern include South Africa’s reluctance to accept direct individual access to the Court, and its failure to take a firmer stand within the AU to support the African Commission and Court when their mandates are being undermined.

While South Africa is a state party to the Court Protocol, it has not made such a declaration (referred to as an ‘article 34(6) declaration’, with reference to the relevant Protocol provision). Judge Ngoepe was asked whether South Africa’s often-cited argument is valid that there is no need for a supra-national court, given the exemplary and progressive jurisprudence of the South African Constitutional Court. In his reply, Judge Ngoepe referred to some examples where even the South African Constitutional Court’s position on a matter would have been ‘enriched’ by referral to the African Court. He added that he sees no need for South Africa to ‘fear’ the African Court’s jurisdiction exactly because the Constitutional Court has such an outstanding record. Making the declaration is a logical and good faith consequence of accepting the Court’s jurisdiction (by ratifying the Court Protocol) in the first place.

In a striking example of its commitment to the African human rights system in the past, South Africa in 2007/8 made a donation of USD 270 000 to the African Commission. These funds were used, among others, to second an official from the Department of International Relations and Cooperation, Ms Caron Kgomo, to strengthen the Commission’s work on gender. She worked with the Commission’s Special Rapporteur on the Rights on Women in Africa.

As part of the commemorative event on 29 June 2021, Ms Kgomo was also recognised for her sterling work in support of the Commission between 2007 and 2012.

The Director of the Centre for Human Rights, Prof Frans Viljoen, observed:

"For a bastion of democracy and human rights on the continent, South Africa has taken a disappointingly ‘hands-off’ approach to the African regional human rights system. The South African government owes it not only to its nationals and its own constitutional values, but to Africans across the continent to firmly support the African Commission and Court, especially when their autonomy or mandate of independent oversight is being undermined by states that have less regard for democracy and human rights.”

To mark the 40th anniversary of the Charter, the Centre for Human Rights, in collaboration the African Commission and the African Court, organised a conference, during which 16 papers reflecting on the evolution of the African Charter were delivered. Speakers at the Conference, which was held virtually on 2 July 2021, included the Chairperson of the African Commission, Dr Solomon Dersso, the Registrar of the African Court, Dr Robert Eno, as well as established academics such as Professors Obiora Okafor, Rachel Murray, Konstantinos Magliveras and Gino Naldi. The Conference also honoured the contributions to the African regional human rights system of Professor Christof Heyns, who passed away in March 2021. Professor Heyns was a previous director of the Centre for Human Rights, and held influential positions within the United Nations human rights system. He also served on the African Commission’s Working Group on Death Penalty, Extrajudicial, Summary or Arbitrary Killings and Enforced Disappearances in Africa.

The papers presented at the Conference will be published in the next issue of the African Human Rights Law Journal. First published in 2001, the Journal marks 20 years of its existence in 2021. Professor Heyns was a founding editor of the Journal.