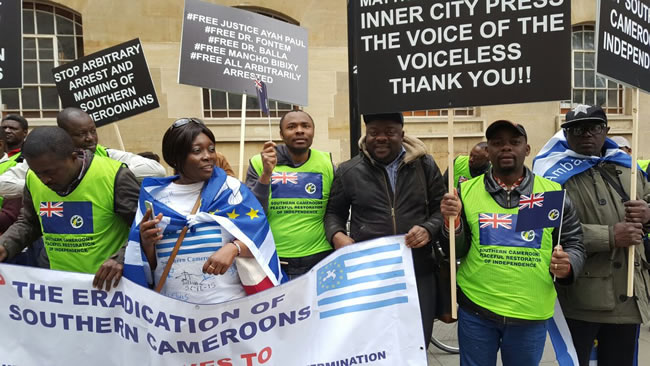 Over the past six months, the English-speaking part of Cameroon has experienced serious repression and continuous human rights violations. The crisis erupted in October 2016, following a series of sit-in strikes and non-violent actions initiated by common law lawyers and teachers’ trade unions in protest against the government’s policy of assimilation through the imposition of the civil law judges to preside over cases in common law courts and French-speaking teachers to teach in English schools. This policy seems designed to systematically wipe out the legal and education systems of the peoples of Southern Cameroons.

The government’s lethal response to the strikes and protest actions led to the death of at least 8 protesters on 8 December 2016, and subsequent extra-judicial killings, disappearances, rape, maiming, torture and other forms of degrading and inhumane treatment. Civil society organisations coordinating the strikes and protest actions were banned on 17 January 2017.  Leaders, including Justice Ayah Paul Abine (Supreme Court Judge), Dr Felix Agbor Balla (prominent international human rights lawyer), Dr Neba Fontem (a university lecturer), Mr Mancho Bibixy (a civil rights activists), and hundreds of other activists and protesters were arrested and transferred to the nation’s capital, Yaoundé (a civil law jurisdiction). They are currently being tried in a military court on charges of terrorism, which carries a death penalty if found guilty. These actions violate the right to fair trial. This is happening in spite of the African Commissions’ ruling in the Kelvin Gunme v Cameroon (para 215(1)(ii)) forbidding the transfer of accused persons from the English-speaking part to be tried in the French-speaking part of the country.

Internet supply was also shut down in the entire English-speaking part of the country on 17 January 2017 (with its accompanying adverse impact on communication, education and research and the local economy). The shut-down lasted for 93 days before it was re-instated on 20 April 2017. Over that period, the French-speaking part of the country remained fully connected and serviced with internet, reminiscent of apartheid-style discrimination against a subjugated people. With the massive crackdown on the population during the period of the internet shutdown, hundreds of Southern Cameroonians were forced to flee persecution into neighbouring Nigeria and some to the UK and the US among other countries where they are currently seeking refuge.

There has been repeated incitements to violence and genocide against the peoples of Southern Cameroons through hate speech and name-calling with pejorative references to them as ‘les enemies dans la maison’ (enemies in the house), ‘les bamendas’ (stupid people), ‘les anglofous’ (foolish Anglophones), ‘les biafrains’ (biafrans, coming from Nigeria). An anchor journalist of a pro-government TV station, Vision 4 by name Jean-Jacque Ze, in the course of the on-going crisis in the month of January 2017, went on air calling the protesting peoples of Southern Cameroons ‘rats’; describing their arrest and detention as ‘dératisation’ (extermination of rats). The government’s conspicuous silence over the hate speech utterances, some of which is promoted by government officials shows the government’s complicity in fuelling genocidal sentiments against the minority Southern Cameroonian population.

It is worth stating that in disregard of the African Commissions’ finding in the Kelvin Gunme case in which the Commission recognised the legitimate claim of the peoples of Southern Cameroons as a distinct people (para 178) and therefore listed a series of recommendations, requiring for the government to engage with the people of Southern Cameroons in constructive dialogue to resolve the constitutional issues and grievances, the government has consistently manifested bad faith in doing so. Courts and schools have remained shut down since October and November, respectively, and the economy semi-paralysed, in civil disobedience against the government’s intransigence to the demands for the demilitarisation of the region and release of the detainees.

On account of these facts, the Centre for Human Rights