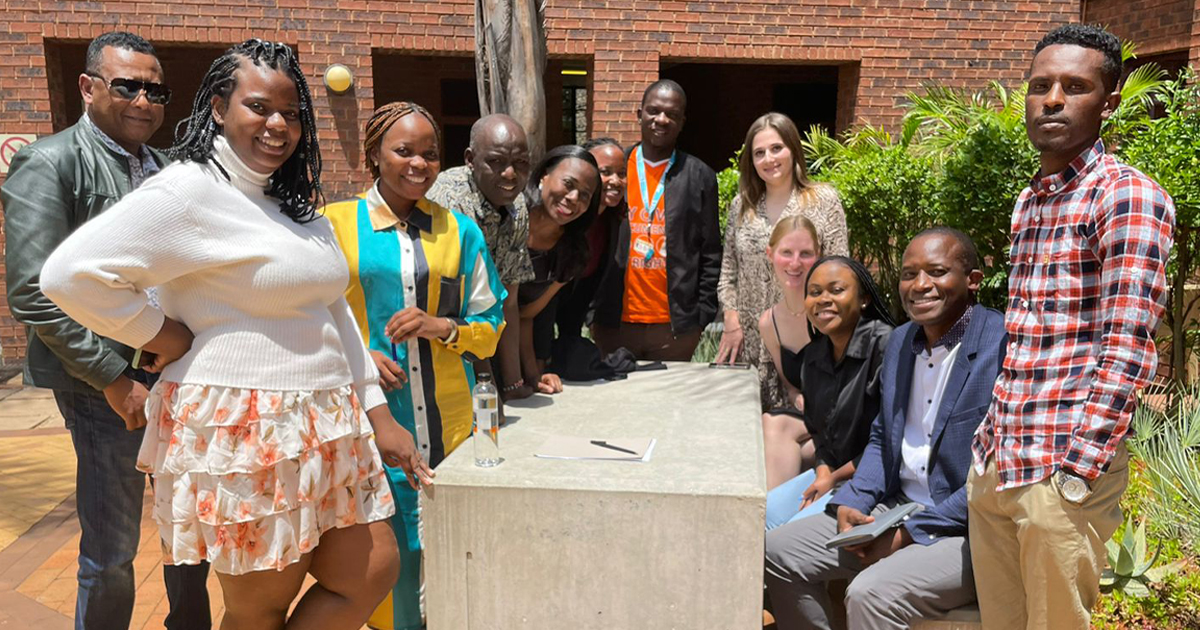 The Centre for Human Rights(CHR), in collaboration with the International Working Group for Indigenous Affairs (IWGIA) and the working group on indigenous Populations/ Communities of the African Commission on Human and Peoples Rights hosted their course on  7-11 November 2022.  The Course was held in a hybrid format with 20 participants attending physically at graduate center of the University of Pretoria and 35 attending online from countries in Africa and abroad. Participants were drawn from all walks of life including but not limited to students, legal practitioners, Indigenous Rights Advocates and members of indigenous communities, members of government institutions, Public Prosecutors, amongst others.

The course began with the remarks, course logistics, objectives, the introduction of participants and the general opening preliminaries by Prof Frans Viljoen, Director of CHR. This was followed by a short introduction of the course class activities by Dr Melakou, Tegegn, the course coordinator and member of the working group on indigenous peoples/ populations.

The first presentation for the first day was on ‘Indigeneity in Africa: Indigenous peoples’ rights and the African Regional Human Rights System (ACHPR), the Working Group on Indigenous Populations/Communities and Minorities’ by Samuel Tessema (Senior Legal Advisor, IGAD, Addis Ababa).  In his presentation he pointed out that, there is no accepted definition of the word ‘indigenous’ in human rights and this has been raising many challenges. He further said, “all African communities can be referred to as indigenous in the etymological sense, while according to the human rights definition of indigenous not all Africans can be considered indigenous”.

Dr. Melakou Tegegn (Member, Working Group on Indigenous Populations) thereafter led the participants through the ‘Dominant Discourse on Development and Indigenous Peoples’. He considered the African State, structural problems, the idea of development and what it should constitute for indigenous peoples and colonization of the mind amongst other issues. According to him no African country has industrialized enough to be considered a developed country and there is no democracy on the continent. This is because African leaders are not interested in development but corruption, they are not in power for the people but only for their self-gains.

The afternoon session of day one began with a presentation by Dr. Alejandro Fuentes (Senior Researcher, Raoul Wallenberg, Institute of Human Rights and Humanitarian Law) on the topic ‘Indigenous Peoples Rights in the Inter-American System: Jurisprudential Trends’. This was followed by another presentation by Samuel Tessema on ‘Policy and Practice of African States on Indigenous Peoples' Rights: Trends, Challenges and Perspectives’.

Mandipa Machacha (Economic, Social and Cultural Rights Researcher of Amnesty International’s Southern Africa Regional Office) closed the day with discussions on ‘The Right to Health for the San People of Namibia’: where she presented a report on the distressing ill-health conditions of the indigenous peoples’ in the sub-region, and how governments are not doing much to ensure access to health facilities for these communities.

The day ended with a launch/presentation of the book titled ‘The Indigenous World 2022’ by IWGIA led by Lloyd Kuveya (Assistant Director, CHR, University of Pretoria) Dr. Melakou Tegagn and Leslie Jansen (Members of the working group on indigenous peoples' rights) and Nikita Bulanin (Advisor at IWGIA).

Dr. Melakou Tegegn began day two with a discussion on the topic ‘Sustainable Development, Climate Change vis a vis Indigenous Peoples’. This was followed by a presentation by Lucy Claridge (Legal advisor, Forest Peoples Programme) on the topic ‘Policy and practice of African States in Indigenous Peoples' Rights: The Ogiek Case’. In her presentation she cited the implementation challenges of the communications of the African Commission by the government. Thus, even after so long post the Ogiek community’s win against the government nothing has changed on the ground, no reparations have been paid to the community. The day ended with Kenya, Ethiopia and Zimbabwe country presentation where the participants discussed the conditions of indigenous communities in their countries.

Will Lassan Kone (Lawyer at Forest Peoples Programme) was the first speaker for the third day and he discussed the ‘Tension between business enterprises and livelihoods of Indigenous Peoples in the Congo Basin’. Where he cited similar challenges of governments choosing economic development over the rights of indigenous peoples’. These communities are normally unjustly evicted without any compensation to allow foreign mining companies to extract minerals from the land in the name of economic development.

This was followed by a short film presented by Nikita Bulanin titled ‘Time is water, a film show about the struggle of the Wampi People of Peru.’ The afternoon session of day three started off with ‘The Experiences of Rights Activism by Indigenous Peoples’ with particular reference to the experiences of the Khomani San from South Africa’ a presentation by Ivan Valbooi (Elsie Valbooi Development Organization, Ashkham, Northern Cape, South Africa). Lola Garcia (Senior Advisor, Global Governance, IWGIA) wrapped up the day’s discussions  with a topic the ‘UN Declarations on the Rights of Indigenous Peoples, Mechanisms for Indigenous Peoples Rights under the UN: UNDRIP, PF’. She affirmed that the existing legal frameworks granting protection of the rights for the indigenous populations exist and are very comprehensive. Governments turn a blind eye to them because they want to escape responsibility. Common practice is the saying that the UNDRIP is not legally binding, but if at all the governments really cared for the indigenous peoples, they would have ratified and ensure implementation of the International Labour Organisation (ILO)Convention 169.

Day four again began with country presentations by participants from New Zealand, Uganda, Liberia, Cameroon, South Africa, the Democratic Republic of Congo, Nigeria and Malawi. The day was concluded with a presentation by Leonardo Alvardo (Specialist in the rapporteurship on indigenous peoples of the IACHR) on the topic ‘Free, Prior, and Informed Consent (FPIC) vis a vis Indigenous Peoples'(Extractive Industries, Infrastructural as well as Energy Projects and International Banks’. He highlighted that even abroad the indigenous populations face similar challenges, there is never free, prior, and informed consent when it comes to the so-called economic development reasons, indigenous peoples are often forced out of their land without consultations, and with no compensation.

Day five which was the final day of the short course began with a presentation by Tereza Getahun (Pastoralist Forum, Ethiopia) looking at ‘The state of land rights of pastoralists: the case of Ethiopia’. This was thereafter followed by country presentations of Indigenous Peoples in Kingdom of Eswatini, Algeria and concluded by Lesotho.

The short course was filled with robust discussions and interactions by several presenters and participants. New Knowledge acquired and an atmosphere of friendliness for everyone irrespective of clime and tongue. The essence of this course would however be defeated if, in the end, no change or contribution is made on matters affecting indigenous communities in the countries represented.