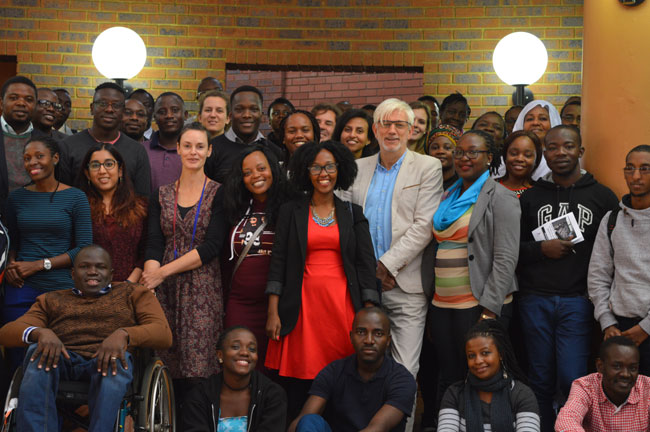 The Centre for Human Rights, University of Pretoria hosted its annual short course on the judicial enforcement of socio-economic rights in Africa from 15-19 May 2017. The course brought together 60 participants from across Africa, mainly representing civil society, members of judiciary, national human rights institutions, policy makers, government officials and academia.

Socio-economic rights have been given recognition under the 1948 Universal Declaration of Human Rights (UDHR). These rights though non-binding are contained in a number of thematic international instruments such as the International Covenant on Economic, Social and Cultural Rights (ICESCR), Committee on the Elimination of Discrimination against Women (CEDAW), the Convention on the Rights of Persons Living with Disabilities (CPLWD) as well as the Convention on the Rights of the Child (CRC). The International Covenant on Economic, Social and Cultural Rights (ICESCR) is the primary international legal source of economic, social and cultural rights. At the regional sphere, these rights are protected under various human rights treaties such as the African Charter, the African Charter on the Rights and Welfare of the Child (ACRWC) and the Protocol to the African Charter on the Rights of Women in Africa (African Women’s Protocol). Articles 15 to 24 of the Africa Charter enumerates these rights as: right to health, the right to education, the right to self-determination, and the right to economic social and cultural development, as well as the right to a satisfactory and stable environment.  The principal body charged with the global implementation of ESCRs is the Committee on Economic, Social and Cultural Rights (the ESCRs Committee). The primary mandate of the committee is to supervise the compliance through state reporting in accordance with the reporting guidelines by member states with their obligations under the ICSECR. On 10 December 2008, the Optional protocol on the ICESCR was unanimously adopted by the UN General Assembly. The Protocol envisions a system of individual and group complaints through which compliance of states parties with the provisions of the ICESCR will be monitored.
Objective of the course

The aim of the course is to strengthen the capacity of judicial officers, lawyers and civil society actors, and to advance informed debate about the role of courts in realising socio-economic rights. Economic, social and cultural rights are recognised and protected in international and regional human rights instruments. Member states have a legal obligation to respect, protect and fulfil economic, social and cultural rights and are expected to take "progressive action" towards their fulfilment. The course is aimed at creating greater awareness and informed policy-making and legislative action on the judicial enforcement of socio economic rights in African States. The expected outcome was that by the end of the course, participants would have appreciated the current development in the field of the ‘Judicial Enforcement of Socio-Economic Rights in Africa’. For example, right to education, right to housing, right to adequate standard of living, right to health, the right to science and culture among others.

Day 1: Professor Malcolm Langford in his lecture titled ‘conceptual issues related to the judicial enforcement of socio-economic rights’ identified lack of resources as well as political will and corruption as some of the conceptual issues impeding the judicial enforcement of socio-economic rights in Africa. In his lecture, Professor Malcolm used cases from Latin America to exemplify how civil society can be an effective instrument in the judicial enforcement of socio-economic rights. Cases such as the Centre for Health Human Right & Development and Others Vs Attorney General 2012 UGCC adjudicated by the Ugandan Constitutional Court was used to illustrate the Ugandan model of non justiciability. Prof Malcolm emphasised that the justiciability debate is almost dead, but posed the question: how can courts address polycentricism issues? In enriching the discourse on the justiciability of socio-economic in South Africa, Professor Jackie Dugard noted that socio-economic and cultural rights are contained in the bill of rights of the South African Constitution of 1996. These rights she explained are adjudicated by South African courts as illustrated in the Grootboom case, Zulu case, Klasse case amongst others. South Africa has adopted other legislations including the renting act, the PIE and other ratified international instruments to ensure effective judicial enforcement of the right to housing. In closing, the Pretoria University Law Press (PULP) located at the Centre for Human Rights, University of Pretoria launched two books namely: ‘Making It stick and the Optional Protocol to the ICESCR: A commentary to commemorate its 175th landmark publication since its existence. Both books were co-edited by Prof Malcolm Langford.

Day 2: The day commenced with discussions on implementation/compliance issues relating to socio-economic rights in the continent. Prof Malcolm referred to a comparative law study of socio economic rights. He posed the question: Why do we use comparative law? In his response, he noted that comparative law is used to interpret domestic law, to improve domestic law, to construct domestic law as well as a tool of harmonisation and transformation. He cited several examples of comparative law including the Sunil Barm v India case, Bandhua Mukhi v Union of India (1984) on right to life and Laxmi Mandal v Deen Dayal Hurinagar Hospital case. Prof Malcolm noted that in Colombia, the role of the court is not negligible as judges play a proactive role in ensuring the realisation of socio- economic and cultural rights. Professor Jackie in her session drew on strategies for and impact of litigating socio-economic rights in South Africa. The session ended with Professor Frans lecture on socio-economic rights compliance in Africa. Prof Frans emphasized the role human rights activist, lawyers, judges, NGO as well as civil societies in raising awareness for effective implementation/compliance of socio-economic rights in Africa.

Day 3: The Universal Declaration on Human Rights (UDHR), adopted by the UN General Assembly in 1948, is one of the most important sources of economic, social and cultural rights emphasized Dr Gustav Muller, Senior Lecturer, Faculty of Law, University of Pretoria. In his lecture, Dr. Gustav explained that the Economic, social and cultural right enshrined in international and regional human rights instruments are legally binding. Member states have a legal obligation to respect, protect and fulfil these rights. The exact nature of states' obligations in this respect has been established principally in relation to the International Covenant on Economic, Social and Cultural Rights (ICESCR) and further Optional Protocol to the International Covenant on Economic, Social and Cultural Rights has been established in accordance with Vienna Declaration and Programme of Action. The Optional Protocol empowers the Committee on Economic, Social and Cultural Rights with the competence to receive and consider communications from individuals claiming that their rights under the Covenant have been violated by a state party. The Protocol provides also for a time frame of 6 months from the violation of socio-economic rights and all available remedies. However, the court is only admissible when the complainant has exhausted all domestic remedies. The legal nature of the OP-SECRs is that the recommendation of the decision may exert a political or economic pressure on the country found in violation of these rights. Justice Johann in his lecture on socio-economic rights adjudication under the South African Bill of Rights explained why and how socio-economic rights were formulated under the South African Constitution. He pointed several cases including the Mr Soobramane case, T Action Campaign case, Nokodiana case as well as those he personally litigated while judge at the South African Constitutional Court to illustrate the justiciability of socio-economic rights under South African jurisprudence. The session ended with discussions on the reality of socio-economic rights litigation in Uganda. According to Prof Christopher Mbazira, Uganda records scanty jurisprudence of socio-economic rights litigation in Africa. He highlighted that Uganda adopts a hybrid approach towards enforcement of socio-economic rights and that its Constitution does not provide for a bill of rights.

Following the brief visit to the Constitutional Court, a session was held at the office of the South African Human Rights Commission in Johannesburg. Professor Lilian Chenwi in her lecture on regional adjudication of socio-economic rights in Africa, Europe and the Americas engaged participants on discussions on the legal framework of the African human rights system at both regional and sub-regional levels. The lecture commenced with a discussion of the context and significance of the African human rights framework as well as the explicit and implicit rights under the African Charter on HPR, the African Charter on the Rights of the Child, and the Protocols on women and the aged. Prof Chenwi further discussed the enforcement mechanisms through the protective and promotional mandate of the African Commission and the African and sub-regional courts. The lecture concluded with a commentary on the challenges in enforcing Socio-economic rights in Africa. A briefing on the role and functioning of the South African Human Rights Commission was also given by the Chairman of the Commission. The briefing covered the background and structure of the commission, with particular details on the operations of the different units as well as the challenges faced by the Commission in performing its functions. The session ended with questions from the participants which were answered by the SAHRC officials.

The course was very timely and relevant especially in light of the Commission’s mandate on member states to respect, protect and fulfil economic, social and cultural rights and to take "progressive action" towards its fulfilment. According to Professor Frans Viljoen, the role of human rights activists, lawyers, judges, NGOs as well as civil societies in framing a collective agenda for the implementation of socio economic rights in Africa cannot be over emphasized. It is hoped that participants will return to their respective countries better informed and equipped to make progressive contributions towards the realisation and implementation of socio-economic rights. The Centre for Human Rights thanks all the lecturers, participants and applicants for their interest and support of the event.