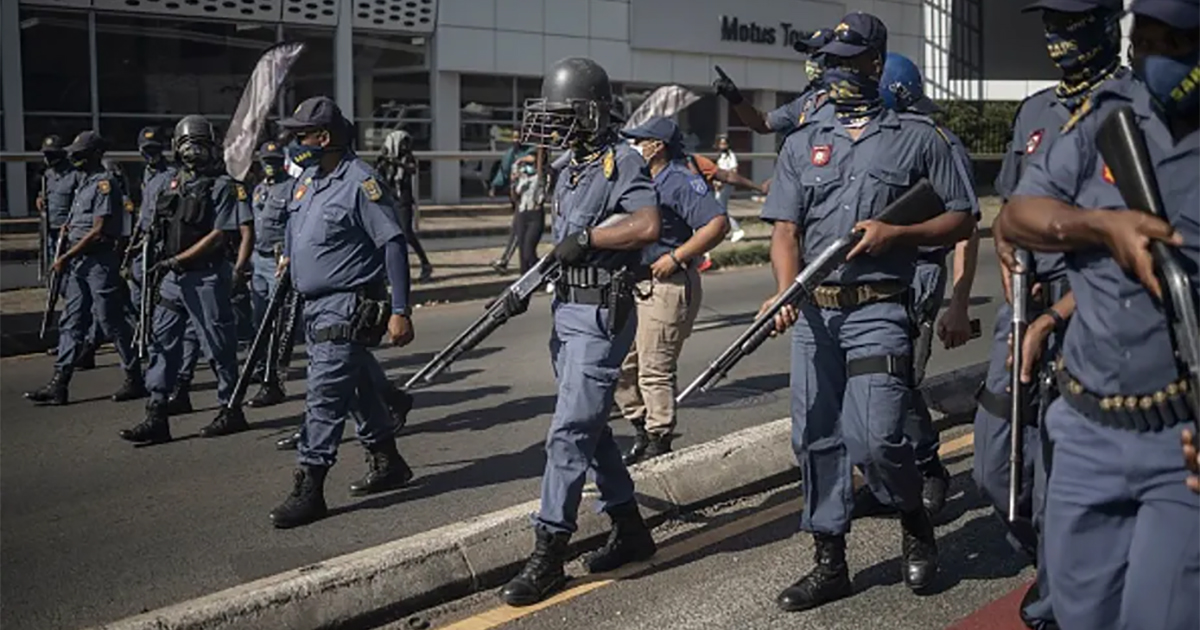 South Africa has a painful history of police using excessive force against protesters. In one of the worst incidents under the apartheid government 69 protesters were shot in cold blood by police outside a police station in Sharpeville in 1960.

One of the legacies of that terrible day is that no one was held to account. No one was ever held criminally responsible or civilly liable for the deaths. Instead of identifying, naming and holding responsible those who shot protesters, the apartheid state brought charges of public violence  against 70 residents of Sharpeville who were part of the protests.

The protests were against the identity documents the apartheid regime forced black people to carry, restricting their movements.

A quarter of a century later South Africans need to be reminded of the past they seek to leave behind. When he signed into law the Constitution of the Republic of South Africa, 1996, President Nelson Mandela chose to do it at Sharpeville. To him the constitution was brought into being by an

unshakeable determination that respect for human life, liberty and well-being must be enshrined as rights beyond the power of any force to diminish.

But the hard truth is that excessive use of force, impunity and efforts to circumvent transparency remain features of policing in South Africa.

Earlier this month a young man, Mthokozisi Ntumba, was shot dead by a policeman in Johannesburg. At the time the police were confronting a student protest. Ntumba was passing by.

Following the shooting the minister of police, Bheki Cele, characterised the police action as an unexplainable exception. In a radio interview he said:

I can’t explain it, it is something without an inch and has no grain of explanation in it. Somebody, for me, just went crazy.

But his statement negates the extent and underlying systemic nature of police brutality. Here are just a few examples from across South Africa, over the last decade.

These are but a few examples based on anecdotal media reporting. But incidents of police excess are much more prevalent. This is known from annual reports of the Independent Police Investigative Directorate, the oversight body charged with ensuring police respect the rule of law and uphold human rights.

A lack of accountability

The shootings listed above had two things in common: excessive use of police force, and a lack of accountability.

In some instances, as in Tatane’s case, those accused were acquitted.

In other cases, such as in Marikana, there were no prosecutions. In the case of Leo Williams, the Independent Police Investigative Directorate recently confirmed that investigations were continuing.

Under the constitution, the job of the South African Police Service is to

protect and secure the inhabitants of the Republic (section 205(3)).

But without transparency, it’s impossible to hold them to this.

South Africans deserve a fuller picture of the extent of police brutality and the level of accountability, especially when people die at at the hands of police. The statistics that the Independent Police Investigative Directorate provide are informative. But the focus is on its own efficiency in investigating alleged police misconduct, rather than specific cases. The information is nameless and provides no link to specific cases.

This year provides an opportunity to face the challenge head on.

Some work has already been done. But it hasn’t been shared with the public.

Three years ago a panel of national and international experts put together a report that provided recommendations on addressing the underlying problems relating to public order policing, including policy, methods and training. The panel was convened on the back of a recommendation made by the Farlam Commission of Enquiry on Marikana.

The panel handed its report to the minister of police in 2018. It has now finally been made public by the police minister.

The senseless death of Mthokozisi Ntumba should make the report a pivot for an urgently needed national dialogue on issues around policing. The proposed amendment to the South African Police Service Act 68 of 1995, introduced in 2020, provides an excellent opportunity for such a dialogue.

Topics should include the demilitarisation of the police, changing the culture in the police, and building better relations with communities. The criteria and process for recruitment, ethics, equipment and leadership should also be open to debate.

While the immediate impetus is the use of force in response to protest, other aspects of policing should be part of the discussion. These include the high level of deaths in police custody, with 237 such cases being reported to the Independent Police Investigative Directorate in the 2019/2020 cycle.

The aim of this process should be to ensure that the country’s police better appreciate that they are custodians of democracy. They are there to protect the most basic right, the right to life. When they fall short due to excessive use of force, the right to know should be fully respected. Full transparency would be a milestone on the road to greater trust between the police and the people of South Africa. Full transparency will also bring about greater accountability.