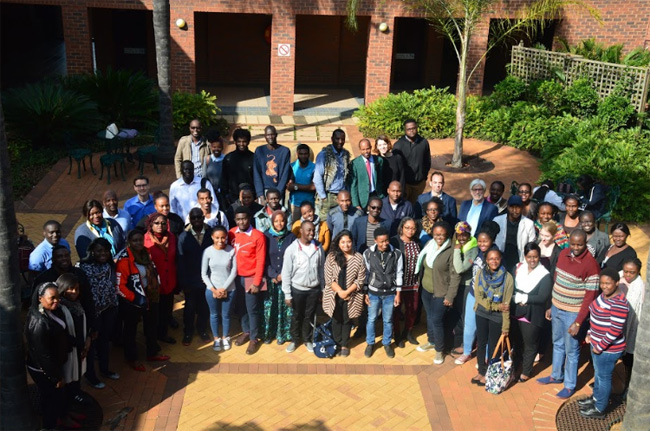 The Centre for Human Rights, Faculty of Law, University of Pretoria in collaboration with Norwegian Ministry of Foreign Affairs presented its annual Advanced Human Rights Course on Judicial Enforcement of Socio-Economic Rights in Africa from 14 to 18 May 2018. The course brought together over 60 participants from across Africa and Europe, mainly representing members of judiciary, civil society, National Human Rights Institutions, policy makers, government officials and academia.

The course commenced with an opening remark by Prof Frans Viljoen followed by a lecture by Professor Malcolm Langford. In his lecture titled ‘conceptual issues related to the judicial enforcement of socio-economic rights’, Prof Langford identified lack of resources, political will and corruption as some of the conceptual issues impeding the judicial enforcement of socio-economic rights in Africa. Dr Gustav Muller who is a senior lecturer at the Faculty of Law, University of Pretoria emphasized that the Universal Declaration on Human Rights (UDHR) adopted by the UN General Assembly in 1948, is one of the most important sources of economic, social and cultural rights. Dr Muller explained that the economic, social and cultural rights enshrined in international and regional human rights instruments are legally binding. Member states have a legal obligation to respect, protect and fulfil these rights. The exact nature of states' obligations in this respect has been established principally in relation to the International Covenant on Economic, Social and Cultural Rights (ICESCR) and the Optional Protocol to the International Covenant on Economic, Social and Cultural Rights(OP-ICESCR) has been established in accordance with Vienna Declaration and Programme of Action. The Optional Protocol empowers the Committee on Economic, Social and Cultural Rights with the competence to receive and consider communications from individuals claiming that their rights under the Covenant have been violated by a state party. The Protocol provides also for a time frame of 6 months from the violation of socio-economic rights. However, the court is only admissible when the complainant has exhausted all domestic remedies. The legal nature of the OP-ICESCR is that the recommendation of the decision may exert political or economic pressure on the country found in violation of these rights.

The key highlights of the course were the visits to the Constitutional Court and the South African Human Rights Commission (SAHRC). During the Constitutional Court visit, participants witnessed submissions made by counsels in the case of Rahube v Rahube where an application for confirmation of an order of constitutional invalidity was made by the High Court of South Africa, Guateng Division, Pretoria (High Court) which declared section 2(1) of the Upgrading of Land Tenure Rights Act 112 of 1991 (Upgrading Act) unconstitutional and invalid in so far as it automatically converts land tenure rights into rights of ownership of property, without providing other occupants or affected parties an opportunity to make submissions.

Following the above, a session was held at the SAHRC where the head of the Economic, Social and Cultural Rights unit briefed participants on some of the work of the commission which includes but not limited to advocacy and mediation. The course ended with a moot court session aimed at advancing the cause of human rights in Africa by providing an opportunity for participants to prepare and argue a hypothetical case before the panel of judges. Professor Frans Viljoen in his concluding remarks stated that the hypothetical case argued applies to the real world and urged participants to become great ambassadors of the values and ideals presented during the course.