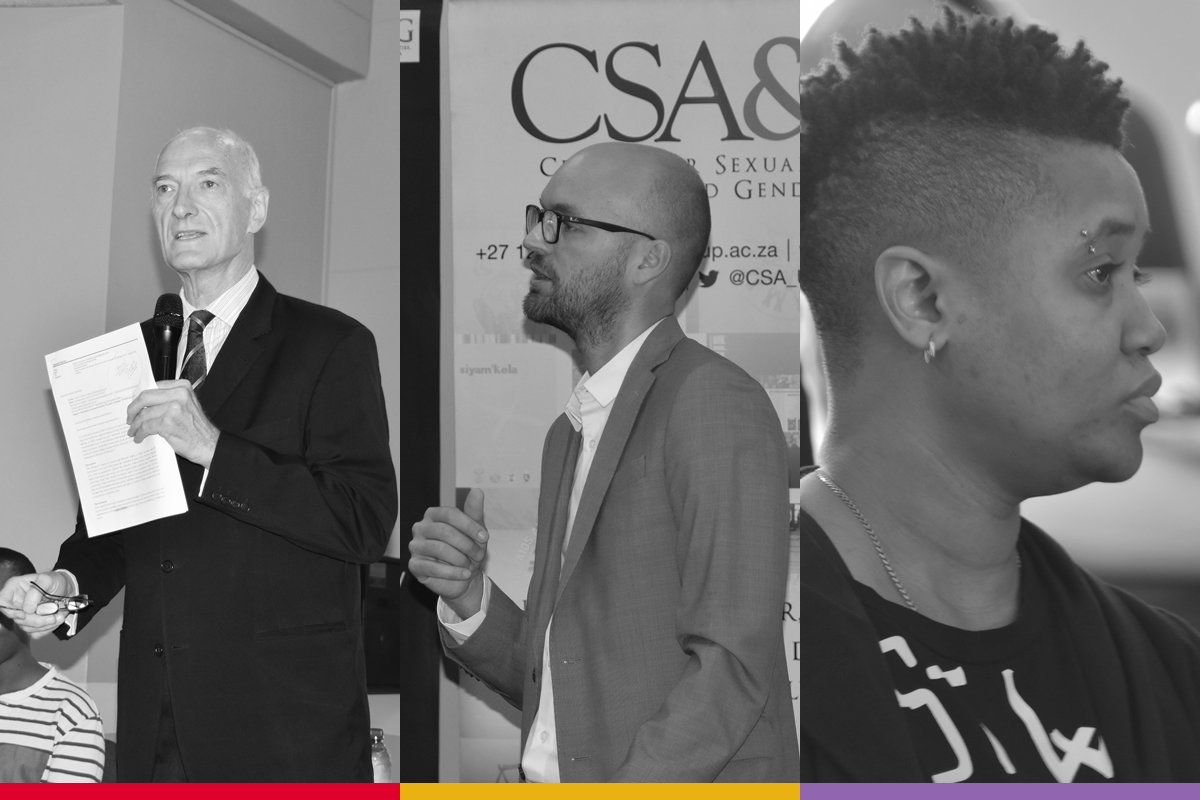 The Advanced Human Rights Courses (AHRC) and the SOGIESC Unit are currently hosting the annual short course on Sexual Minority Rights in Africa. The maiden edition of the Pride & Letters Queer Literary Festival forms part of the week-long programme.

This year the Advanced Human Rights Course on Sexual Minority Rights in Africa (AHRC SMRA) is interwoven with the maiden edition of the Pride & Letters Queer Literary Festival (Pride & Letters). Pride & Letters, supported by The Other Foundation, is a reinvention of the approach through which the human rights of sexual and gender minorities are addressed in the context of teaching and learning. Pride & Letters stirs the conversation from the logical and black letter discourse to the intimate and personal drawing in the storytelling, dance, photography, music, readings of literary works and providing brave spaces for open conversations between persons who non-heteronormative sexual and orientations and gender identities and the broader society. In its maiden edition, Pride & Letters addresses the themes of Queer Exploration; Queer Resistance and Queer Celebration. While the Pride & Letters segment is open to the general public, the alternating days are for registered course participants.

The fusion between the AHRC SMRA and Pride & Letters kicked off on  Monday 25 February with the theme of Queer Exploration and its first conversation was on Coming Out. This conversation featured Virginia Magwaza, Mmeyi Mosehla, Siseko Kumalo and Justice Edwin Cameron. More conversations followed on the lived experiences of intersex and trans persons of various ethnicities and nationalities. Following these there a Tableau, in the course of which participants were assigned the task of guessing the sexual orientations and gender identity and gender identity of a silent group of people holding up letters of the alphabet that gave up no clue what so ever. There was also an exhibition on the Transgender women and their conversations on the transinclusivity and the Protocol to the African Charter on Human and Peoples’ Rights on the Rights of Women. This exhibition was pleasantly disrupted by a flash mob by students of the University of Pretoria performing Toy by Netta and This is Me from The Greatest Showman.

’Why do we value diversity: - because we are different; we make ourselves strong and value each other; to deny diversity is terribly destructive.’’
- Justice Edwin Cameron, Judge, Constitutional Court of South Africa

The second day of the week kicked off with an opening remark by Dr Zyi Raman representing the Government of Flanders on the importance of having the conversation of LGBTI inclusion. The day focused on the regional human rights systems as it addresses the human rights of sexual minorities; Sustainable Development Goals and LGBTI inclusion and the conversation on reframing normality.

'We believe in human rights that’s why we support programmes such as this one. WE support that civil society will add its voice to this.
Human rights law shoud set the the tone and society should follow.
LAWS are not enough and more should be done.
This is why human rights organisations come in to do more.'
- Dr Zyi Raman, Deputy Representative of the Flemish Government in Pretoria

Lucy Mujaya spoke about LGBT migration and her personal journey of having been beaten up because of her sexual orientation in Tanzania. She was brutally assaulted twice and shot. She went through life-threatening abdominal surgeries after the shooting and she could not eat for a month because the bullet went through her duodenum. She was subjected to extreme hunger as a result of the recovery process and as if that was not enough, she was ran over deliberately by a car, shattering her face and breaking her leg. She then fled Tanzania for Belgium to seek asylum based on sexual orientation.

'As lucy I have moved from victim to being a voice and an inspiration to others!!!'
- Lucy Mujaya, Freelancer, cavaria & Kliq, Belgium

The third day of the course and the second day of Pride & Letters delved into countering the arguments posed by culture and religion against LGBTI persons and realities. Conversations were had on the ‘Africanness: what queerness brings to the debate’ ; ‘Sex in the archives’ and ‘Faith, sexualities, and identities’. A line of world-class African and international researchers, film-makers, clergy and archivists were featured here, making a case for the recognition and inclusion of LGBTI persons and realities. We are in history and we are here now and this is not nothing. There was a screening of the Nigerian film Hell or high water which addresses religious and moral resistance to same-sex realities in Nigeria. Today also featured readings of Siya Khumalo’s You have to be gay to know God  and a musical performance by Kirsten Dey of the English Department, University of Pretoria.

On this day, the theme of ‘Domestic legal framework and the litigation of sexual, gender and characteristics rights in Africa’ was addressed. The assigned experts dealt in detail with the specific African nationalities that they were citizens of and worked in. Thiruna Naidoo addressed the issue of violence faced by queer women in South Africa; Tashwill Esterhuizen addressed strategic litigation on sexual minority rights in South Africa. Dr Adrian Jjuuko addressed the jurisdiction of Uganda; OabanaSepora and Prof Bonolo Dinokopila addressed Botswana, and Anthony Oluoch addressed Kenya. Following this, the legal issues as regards intersex persons were addressed in a conversation led by Tapiwa Mamhare, Joshua Sehoole, and Wallace Mbugua Nderu. At the end of the day, the course participants settled into an informal evening cocktail.

This day was split into two segments: the conclusion of the course and the masquerade evening drawing the curtains on the Pride and Letters festival. The course was rounded off with the theme of ‘Advocacy on sexual, gender and sex characteristic minority rights. There was a further conversation on the state of LGBTI rights in Uganda by Dr Adrian Jjuuko. Following this the role of national human rights institutions in advancing the rights of sexual, gender and sex characteristic minorities.

The masquerade evening was a beautifully lingering magic moment that began with some music that ushered the guests into the venue as they were led to choose masks from our mask collection. There was a conversation on Queer celebration moderated by Tiffany Mugo featuring Thiruna Naidoo and Siya Khumalo. Among other things, they touched on the issue of desire, identity, self-care, tensions within the queer rights movement and the Africanisation of queerness through the use of indigenous labels. The final product of the Transmaputo project (the booklet and documentary) was also launched, capturing the thoughts of South African transwomen on the Protocol to African Charter on Human and Peoples’ Rights on the Rights of Women.

This was neatly followed by dinner accompanied by more music that touched on the theme of love, taking chances and magic. We were graced with the live performance by Ecstasy, an artist and law student at the University of Pretoria. The magic evening lingered on till very late each moment laced with enchantment after enchantment as the masks fell off and our guests connected with each other, fortifying each other and taking this new force into the world to change it.