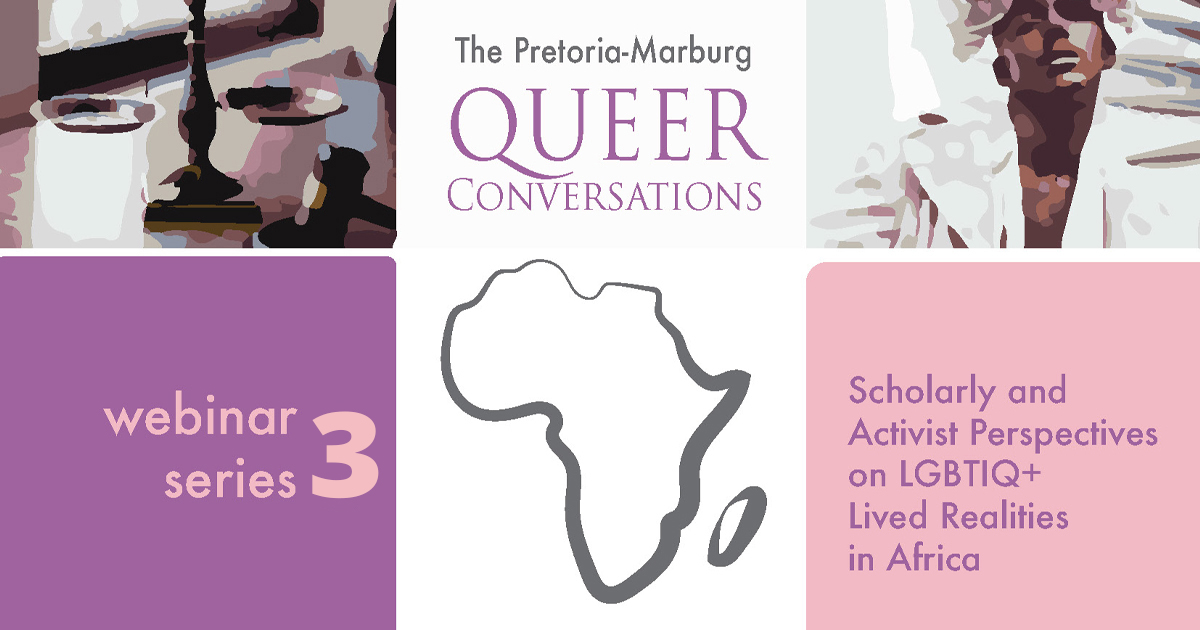 On 9 June 2022, the Center for Gender Studies and Feminist Futures (CGS) and the Centre for Conflict Studies (CCS) at the University of Marburg coordinated the third webinar in the Pretoria-Marburg Queer Conversations: Scholarly and Activist Perspectives on LGBTIQ+ Lived Realities in Africa in collaboration with the Centre for Sexualities, AIDS, and Gender (CSA&G) at the University Pretoria and the Centre for Human Rights (CHR) at the University of Pretoria. The Pretoria- Marburg Queer Conversations creates a monthly space for in-depth discussions designed to tap into the intersections of knowledge-production and transfer between diverse scholarly and activist spheres and contributes to methodological, conceptual, and normative aspects of centering LGBTIQ+ rights and lived realities in African contexts.

In the third event, Dr Mariel Reiss from the CGS and CCS facilitated the discussion entitled ‘The Colonial Legacies of Anti-LGBTIQ+ Rights in African States’. The first panelist is Monica Tabengwa, a human rights lawyer from Botswana as well as a founder and supporter of LEGABIBO. She now works as a policy specialist at the United Nations Development Programme Africa regional office. The second panelist is Dr. Adrian Jjuuko, a Ugandan human rights lawyer and advocate who focuses on LGBTI rights, the right to health, and children’s rights, and is also the founder and executive director of Human Rights Awareness and Promotion Forum (HRAPF).

In the course of the discussion, Ms Tabengwa and Dr Jjuuko explored the influence of the colonial legacies in different African legal systems. Although recent constitutional reforms have sought to diminish the influence of colonialism in the continent, common law remains intertwined with colonial practices. African states seeking to free themselves from these colonial legacies are challenging the laws introduced during the colonial era. For example, the laws criminalising consensual same-sex conduct in many African states can be traced back to laws implemented during British colonial rule. One related aspect of this is the binary understanding of sexuality which was largely only introduced through missionaries and colonial powers. Monica pointed out the expanding effect of the criminalisation, which is expressed in various aspects of the denial of rights, such as the right to health care, or education. Moreover, she pointed out, that LGBTIQ+ people encounter poverty and homelessness at a higher rate due to their limited access to economic rights.

Dr Jjuuko pointed out two distinct aspects of these colonial legacies. First, the contemporary historical approach of colonialism, from the Berlin Conference in 1884 to the attainment of independence by most African states in the 1960s. Second, the continuity of a colonial system extending beyond colonialism, especially in the areas of gender and sexuality, where African elites continue to perceive themselves through the European lens and standards during the colonial era. Even though the former colonial powers, like Great Britain, ended the criminalisation of same-sex conduct in their own countries, several African states appear to persist with the colonial legacy and continue to uphold these laws. There are challenges on different levels that need to be addressed in decolonisation for the movement to be sustainable. At the organisational level, the key to a decolonised movement lies in the self-sustainability of organisations, many of which currently rely on external donor funding. At the individual level, the challenges concern issues of food and basic needs, factors which hinder individuals from even thinking about decolonisation.

Throughout the discussion, Ms Tabengwa and Dr. Jjuuko emphasise the importance of not merely focusing on the future, but also reflecting on the past and delving into the roots of colonial legacies in order to better comprehend and tailor the strategy for decolonisation. Ms. Tabengwa pointed out that the African education system needs to be revolutionised in order to achieve sustainable change starting by unpacking terms that are used on a daily basis, given that knowledge is an important tool of decolonisation. For this reason, it is crucial that knowledge about LGBTIQ+ issues and decolonialisation goes beyond academics and NGOs. In order to accomplish this, Dr. Jjuuko firmly believes in having conversation with targeted individuals on these issues. Ms Tabengwa also pointed out that it is vital to provide politicians and other key stakeholders with evidence of violations committed against LGBTIQ+ persons and herewith create more awareness for the struggles of this group of persons. Another key strategy involves establishing solidarity with mainstream human rights movements to intersectionally address elements of oppression and treating human rights as an all-inclusive subject. Furthermore, in order to remove colonial legacies, it is also necessary to identify obsolete laws and eliminate them. Finally, at a time when anti-LGBTIQ+ ideologies are emerging, identifying the opposition and what tools are being utilised is crucial to debunk populist stereotypes which are being propagated.

The Pretoria-Marburg Queer Conversations continue on 7th July 2022 with the topic “Theorising violence and abuse within LGBTIQ+ relationships” organised by the Centre for Sexualities, Aids, and Gender (CSA&G) at the University of Pretoria. Register for the following event webinars below.