Call for Abstracts: Colloquium on 'Reading the LGBTI category at the locale - Indigenising stigmatised non-heteronormative African sexualities and genders' 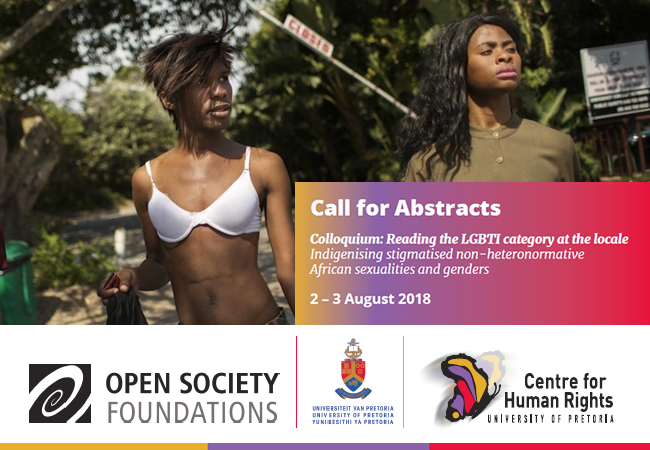 The Centre for Human Rights, University of Pretoria, is convening a colloquium on 2 - 3 August 2018 and is calling for abstracts on non-heteronormative African sexualities and genders.

The colloquium has the following main themes:

It is anticipated that papers presented at the colloquium will be reworked by authors with a view to their consideration for publication as chapters in an edited volume.

In a path-breaking anthology, African sexualities: A reader (2011), Sylvia Tamale warned about the dangers of an oversimplified African discourse on sexualities which uncritically relies on knowledge built on an edifice of cultural assumptions in the West but is not responsive to the concrete ways in which sexuality is experienced in African spaces. By extension, the caution can also be extended to an oversimplified discourse on African genders. In sounding caution, Tamale should not be understood as advocating African separatism or, much less, repudiating a universal quest for freedom from sexual and gender oppression on the basis that knowledge that has its origins in the West has no value for the African locale. Indeed, as Tamale concedes, such knowledge does not have just analytic value for critiquing African social and political systems but it is also knowledge African scholarship cannot ignore. Rather, Tamale’s point is to sound caution against essentialism in much the same way as critics of Western feminist discourses have done so that African scholarship can avoid the path of unproductive and subordinating mimicry.

Whilst rights-based discourses on African sexualities and genders are using the LGBTI category (or its variants such as LGBTIAQ+) to advocate for the respect, protection, promotion and fulfilment of stigmatised sexualities and genders on the continent, it is unclear whether the discourses are also seeking to fully capture local meanings and cultural practices. This is a pertinent issue to excavate not least because the LGBTI category represents concepts that have their epistemological ‘source’ or ‘origins’ in the West. It is unclear whether in African spaces the LGBTI category is being deployed and appropriated in ways that are transformative and discursively located within local contexts of power, meaning and responsiveness to the lived experiences of differently positioned social actors. A discursive and transformative approach is one in which there is space for democratic appropriation and iteration, including discursive interaction with rights-based concepts and their transactional categories so that that there is participatory democracy and reciprocity between the global and the locale.
Indigenising or indigenising the LGBTI category is important partly in order to take up V.Y. Mudimbe’s challenge to African scholars to develop African knowledges. In The invention of Africa (1988), Mudimbe argued that the history of knowledge in Africa and about Africa appears ‘deformed and disjointed’ partly because of the colonial library which produced an archive of knowledges was marked by the absence rather than the presence of African speech. To borrow from Mudimbe, rendering the LGBTI category responsive to the locale creates space for transforming a ‘discourse of competence’ into a discourse which is dialogic and inflected by African speech acts and practices.

In On the postcolony (2001), Achille Mbembe echoes Mudimbe on the neocolonial risks inherent in uncritically using Western episteme to address Africa and respond to its contemporary social, political and economic challenges. Mbembe argues that the use of ‘universal grammars’ in critical social theoretical discourses is a methodological question which must be addressed by any account of the social and political imagination of Africa which seeks to be intelligible and relevant to Africa and Africans.

Our point of departure is that the ‘naturalness’ of heterosexuality and its congruent gender binaries is being contested daily on the African continent. However, we need to know how the contest is being verbalised and how non-heteronormative sexualities are being indigenised and concretised in African spaces with their particular cultures, histories, communal experiences, polities and individual subjectivities. Is there recognition of a contest that is rooted in the locale? How is the LGBTI category being critically appropriated by African peoples so that the category speaks to the imagination of a concrete humanity shorn of uninterrogated universalism? And how is the LGBTI category that has its origins in the West being shaped by African influences?

Against this backdrop and as part of academically enriching the Sexual and Reproductive Rights in Africa programme at the Centre for Human Rights (Centre), University of Pretoria, and promoting epistemologies that speak to African peoples, the Centre is hosting an inter-disciplinary colloquium on interrogating the indigenisation of the LGBTI category in the African region.

The colloquium, which will be held on 2 and 3 August 2018 is an inter-disciplinary academic forum for presenting and critiquing papers. It seeks to bring together scholars and researchers from different disciplines, including anthropology, cultural studies, history, human rights, law, philosophy, theology and sociology from the African region and beyond. Interested participants are invited to submit abstracts on topics of their choice.

The following topics serve as inclusive guidance only as participants are free and, indeed, encouraged to explore their own interest within the scope of the colloquium:

As part of underscoring the importance of addressing the theme of the colloquium, authors should clearly articulate their focus and argumentation as well as show how their abstract will contribute towards critical understandings and interrogation of non-heteronormative sexualities and genders of African peoples. An inter-disciplinary approach is encouraged so that sexualities and genders can be located in their social, cultural and historical contexts.

A committee will review abstracts that are in English, are 300-350 words in length, without footnotes or endnotes, and in MS Word format (not PDF). Abstracts must include in a single document: Title of abstract, author’s name, affiliation, qualifications and email address.

Abstracts must be sent by email to Charles.Ngwena@up.ac.za by 15 April 2018.

Authors wishing to discuss ideas before submitting an abstract can contact Charles Ngwena at the same e-mail address.

Authors will be notified by 30 April 2018 whether their abstract has been accepted.
Authors of accepted abstracts are required to submit full papers by 30 June 2018.