A kiki* with Panti (#IDAHOT event) 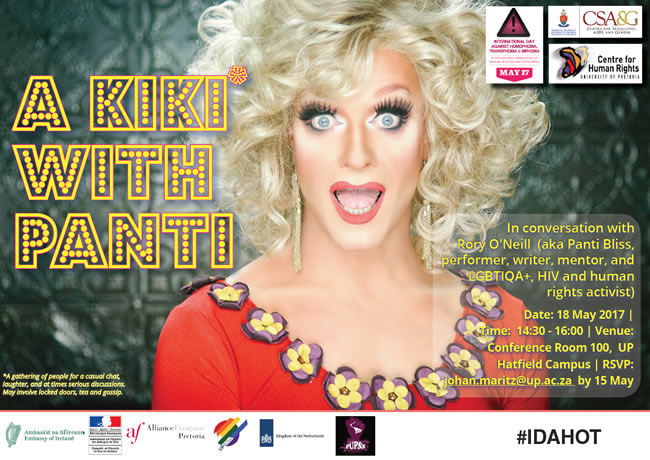 kiki* with Panti (*A gathering of people for a casual chat, laughter, and at times serious discussions. May involve locked doors, tea and gossip.) In conversation with Rory O'Neill (aka Panti Bliss, performer, writer, mentor, and LGBTIQA+, HIV and human rights activist)

GENEVA (3 May 2017) – The Government of Eritrea must free journalist Dawit Isaak who has been awarded a prestigious press freedom prize some 15 years after he was detained, a United Nations human rights expert says.

The Special Rapporteur on the situation of human rights in Eritrea, Sheila B. Keetharuth, is also calling on the authorities in Asmara to release unconditionally all others detained unlawfully.

“The Eritrean authorities should stop the practice of arrests and detention carried out without legal basis instantly,” said Ms. Keetharuth, welcoming the award of the UNESCO/Guillermo Cano World Press Freedom Prize 2017 to Mr. Isaak.

Dawit Isaak, who is 52 and a playwright, journalist and writer, moved to Sweden in 1987, where he later became a citizen. He returned to Eritrea only after independence in 1993 and was one of the founders and reporters of Setit, the first independent newspaper in the country.

Mr. Isaak was arrested in September 2001 during a political crackdown on the so-called G-15, a group of politicians, and journalists critical of Government policies. Some were detained and tortured, others disappeared. The last known sighting of Mr. Isaak was in 2005. His whereabouts now are unknown.

“The case of Mr. Isaak is emblematic of all those who have been subjected to enforced disappearances by the Government of Eritrea and remain unaccounted for,” said Ms. Keetharuth.

The Special Rapporteur recalled the findings of the UN Commission of Inquiry on Human Rights in Eritrea, which concluded that there were reasonable grounds to believe that Eritrean officials had committed crimes against humanity, including the crime of enforced disappearance, in a persistent, widespread and systematic manner since 1991.

“The Government of Eritrea has an obligation to urgently provide information on the fate and whereabouts of all those deprived of physical liberty. This would be a first and long-overdue indication that the Government is committed to rebuilding trust with the Eritrean people,” Ms. Keetharuth said.

“By allowing independent monitors immediate and unhindered access to all places of detention, official and unofficial, the Government would send a strong signal that it acknowledges human rights violations of the past, while taking steps to improve the situation on the ground now.
“The arrests of Dawit Isaak and his fellow journalists remain the most visible sign of repression of freedom of expression. The Eritrean authorities continue to stifle all forms of expression that could be perceived as critical of the Government and its policies,” she said.

Ms. Keetharuth reaffirmed that freedom of expression was a basic human right, and a free press one of the tenets of a democratic society, providing a valuable check on potential excesses by government.

Ms. Sheila B. Keetharuth (Mauritius) was appointed as the first Special Rapporteur on the situation of human rights in Eritrea in October 2012. From 2014 to 2016, she also served as a member of the Commission of Inquiry on Human Rights in Eritrea. Since May 2014, Ms. Keetharuth is an expert member of the Working Group on Extractive Industries, Environment and Human Rights Violations of the African Commission on Human and Peoples’ Rights. Until 2012, Ms. Keetharuth was the Executive Director of the Institute for Human Rights and Development in Africa in Banjul, The Gambia. She also worked with Amnesty International in Kampala, Uganda, and as a lawyer and broadcaster in Mauritius. In 2017, Ms. Keetharuth was awarded with the Outstanding Alumni Achievement Award by the University of Leicester, in recognition of her human rights work.

Special Rapporteurs are part of what is known as the Special Procedures of the Human Rights Council. Special Procedures, the largest body of independent experts in the UN Human Rights system, is the general name of the Council’s independent fact-finding and monitoring mechanisms that address either specific country situations or thematic issues in all parts of the world. Special Procedures’ experts work on a voluntary basis; they are not UN staff and do not receive a salary for their work. They are independent from any government or organization and serve in their individual capacity.