Launch of Queer Africa 2: New stories and the fight for the protection and promotion of the human rights of non-confirming sexual and gender minorities 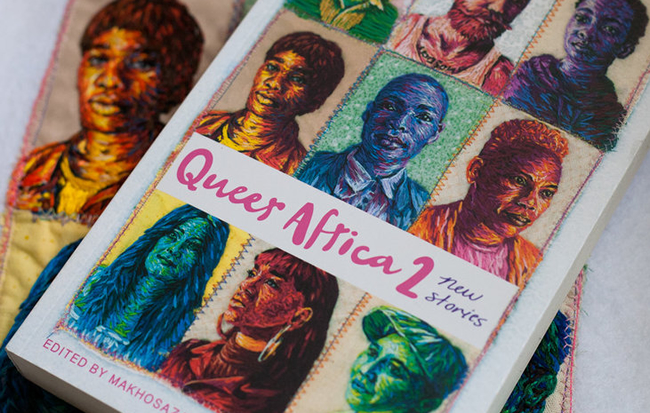 The force behind bringing Queer Africa 2: New stories home to UP, was the QSC’s vision to make the UP safer and more inclusive of queer identity and expression through creative writing and expressions. The QSC is an informal group comprising of individuals mostly from ten organisations representative of both themselves and their organisations. These organisations include: Student for Law and Social Justice; Up and Out; English Department and Drama Department of the University of Pretoria; Church World Services; Right to Care; Gay and Lesbian Memory in Action(GALA); Centre for Sexuality Aids and Gender; and the Centre for Human Rights. These organisations among other things engage actively at the core of their work with the issues of queerness and sexual and gender minority issues. Interestingly, individual membership of the QSC cuts across persons of various ages, races, sexual orientation, gender identities, nationalities and backgrounds working together through interdependence amongst members and member organisations to storm UP, to charm the UP space with the saturating consciousness of the need for equality, safety and inclusivity. The launch of Queer Africa 2: new stories is the Queer Space Collective’s maiden event.

The launch started at about 5:00pm darting straight into Kirsten Dey’s performance of Jennifer Shinta Ayebazibwe’s ‘Perilous Love’, one of the stories featured in Queer Africa 2: New stories. After this was a welcome address by Khulukazi Soldati-Kahimbaara and Pierre Brouard, (both QSC members). Following this was presentation by GALA taken by Makhosazana Xaba. The evening played rolled out seamlessly from one excerpt performance to another to a soothing musical performance by Nande Jordan. and the group performance by the Queue. In attendance were four contributors to the anthology: Jennifer Shinta Ayebazibwe; Zukolwenkosi Zikalala; Barbara Adair, Matshepo Thafeng and Emma Paulet who is a student here at UP. Excerpts from their pieces were performed by Kirsten Dey, Morne Steyn, Craig Chapman, Yolandi Bester and Norman Taku.

After the excerpt performances, a panel discussion, comprised of all four authors present and chaired by Edwin Smith, followed. The panel discussed the issues of coming out, the inspiration for their features stories.  The inspirations ranged from the availability of spaces for queer literature to the availability of queer characters in real life to represent through literary works. Among the inspirations mentioned was the writers desire to play with queer characters, the need to not only see queer characters represented in literary works, but more importantly to need to respond to negative and condescending representations that flood the predominant narratives in literature about queerness.

The theme of queerness was also discussed. Barbara Adair argued that queerness meant going against the dominant narrative and doing away with labels. When the conversation extended to the audience it was seen while some celebrated the freedom that came with queerness and the rejection of labels some insisted on the necessity of labels because labels, like the twitter hashtags ‘Black Lives Matter’, are an avenue to further crystallise the demand for equality and non-discrimination. An interesting comment rose from a member of the audience that the character or habit of rejecting labels is itself a label, and asked that if the goal of queerness is rejecting labels, how does one avoid the label of constantly rejecting labels? These among several other questions and comments darted among the panel and between the panel and the audience.

The event ended with a stellar musical performance by Queue Marshalls, a student band of three based here at the University of Pretoria, and concluding remarks by David Ikpo. Following this, the guests further eased into each other’s company, met up with contributors, purchased copies of the Queer Africa series and carried on with the conversations over refreshments in the foyer as magical evening sprawled itself across their hearts and memory.

Queer Africa 2like the earlier version Queer Africa (winner of the 2016 LAMBDA prize for fiction) is a huge success not just for GALA, the QSC, the academic and literary community, but is also the alchemist’s elixir, with the potential to drive the African queer rights and visibility campaign immensely. Publications such as Queer Africa 1 and Queer Africa 2 are very potent driving point in the fight for the protection and promotion of the human rights of non-confirming individuals such as sexual and gender minorities. This is more so because hostile and unjustly maligning dominant narratives need to be countered, and where there is silence, new stories need to be told. These dominant stories lead to tragic events such as the Orlando Massacre of 2016, the wide enactment of homophobic legislation, the demonisation of homosexual men, the recurrent rape of lesbians and gender non-conforming individuals and the the unconscientious genital mutilation of intersex persons. These dominant stories crush the equality and non-discrimination that the South African Bill of Rights and legal system pledge to sexual minorities and the queer community in South Africa.

We celebrate, salute and embrace the QSC, GALA and Queer Africa 2 for storming the University of Pretoria grounds to consolidate the queer revolution. It was a ground-breaking experience, a magical evening, an echoing of ‘We are here. We are human’. TheQueer Africa 2 journey continues, to its next and fifth launch on Thursday 3 August 2017 at Lovebooks, Melville.