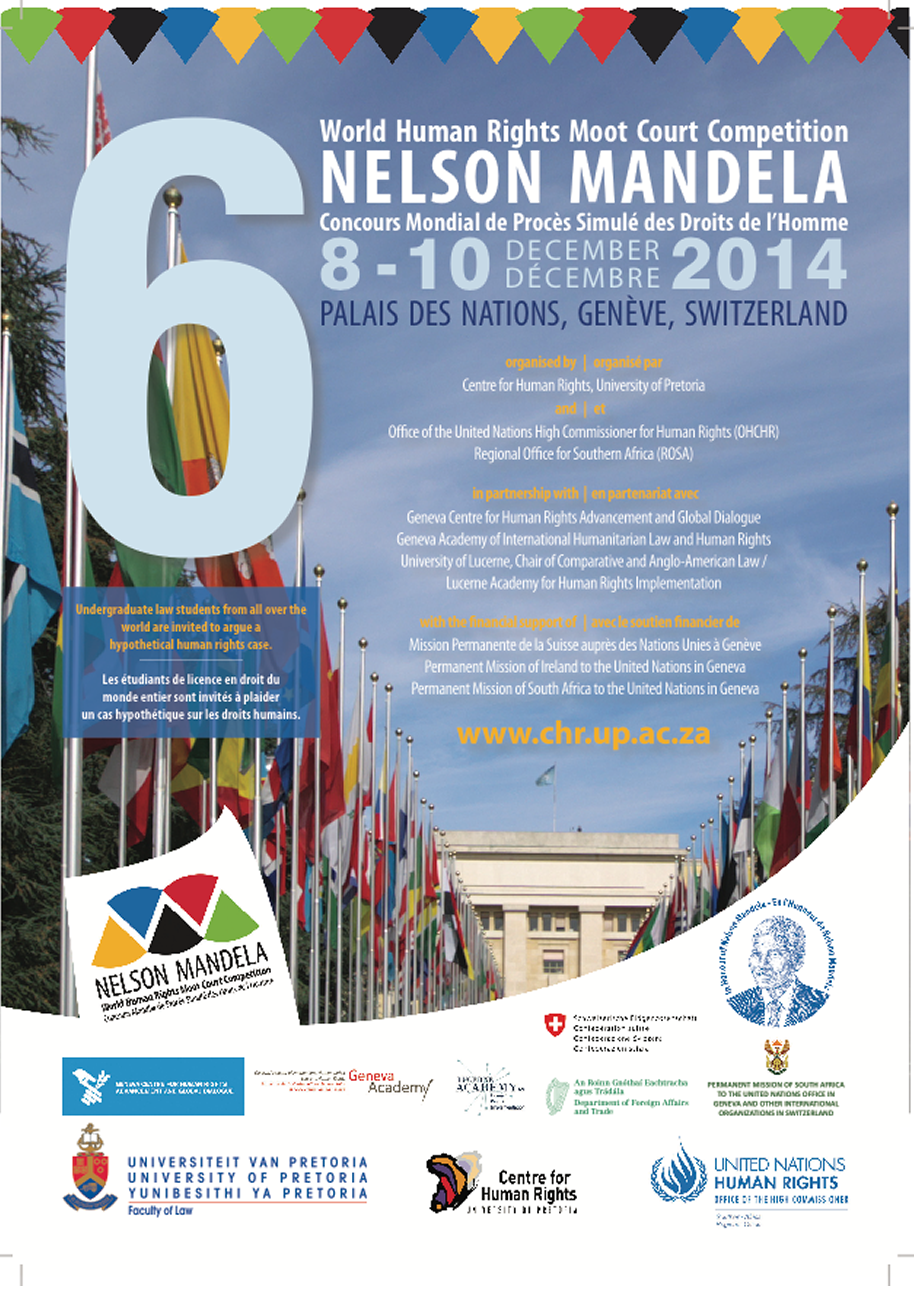 The 6th Nelson Mandela World Human Rights Moot Court Competition was held in Geneva, Switzerland from 8 to 10 December 2014. Established in 2009, the main objective of the competition is to bring together students, law professors and human rights lawyers from different legal systems to debate and discuss contemporary cross-cutting human rights issues. The competition is organised in collaboration with the United Nations Office of the High Commissioner for Human Rights.

After being held in Pretoria for the 5 past years, the United Nations Offices in Geneva hosted the Competition for the first time in 2014. The executors of the estate of the late President Nelson Mandela granted permission for the competition to be named after the great statesman and human rights icon, Nelson Mandela (the event was previously simply called ‘World Human Rights Moot Court Competition’).

Prospective particpants had to submit memorials in order to be chosen to compete in Geneva and 13 teams from 12 countries from the 5 UN regions were selected to compete in the pre-final rounds in Switzerland. Over 40 participants were welcomed at Palais Wilson, the former headquarters of the League of Nations and currently the Office of the High Commission for Human Rights. At the Opening Ceremony participants were welcomed by Mr Eric Tistounet, the Chief of the Human Rights Council Branch and  Prof Christof Heyns, the Co-director of the Institute for International and Comparative Law in Africa at the University of Pretoria and United Nations Special Rapporteur on extrajudicial, summary or arbitrary executions. The President of the Human Rights Council Mr Baudelaire Ndong Ella encouraged participants to use this opportunity to deepen their knowledge of the UN mechanisms and other international instruments.

The pre-final rounds were held at the Palais des Nations, the headquarters of the United Nations human rights agencies. The panels of judges in these rounds were human rights experts as well as lecturers from the participating universities. Teams from the following countries participated in the pre-final rounds: Argentina, Australia, Belarus, Greece, India, Indonesia, Kenya, Singapore, Slovenia, Poland, Switzerland and South Africa. After a visit to the International Red Cross museum the finalists were announced. The teams from the University of New South Wales in Australia and Moi University in Kenya qualified to advance to the final round.

The final round was held on International Human Rights Day (10 December) in the famous Room XX of the Palais des Nations. Finalists were privileged to argue in this room (also known as the Human Rights and Alliance of Civilizations Room) where the Human Rights Council regularly meets to discuss burning issues.

The finalists argued a hypothetical human rights case in front of the following eminent judges:

After a gruelling debate, the team arguing for the Respondent, the University of New South Wales, was declared as the winners of the 6th Nelson Mandela World Human Rights Moot Court Competition. The Final Round and the Closing Ceremony was attended by the Vice-Chancellor and Principal of the University of Pretoria Prof Cherryl de la Rey. The highlight of the Closing Ceremony was the keynote address by the newly appointed United Nations High Commissioner for Human Rights Zeid Ra’Ad Al Hussein. The High Commissioner commended the initiative and encouraged participants to build on these experiences to ultimately win the battle against human rights abuses.

This competition was once again a great success and a unique opportunity for students from different parts of the world to engage with their peers on global human rights issues. It provides a platform of exchange between universities across the world on topics related to human rights and encouraged the students to be, as in the words of Nelson Mandela, the ‘teachers, judges and leaders of tomorrow..’