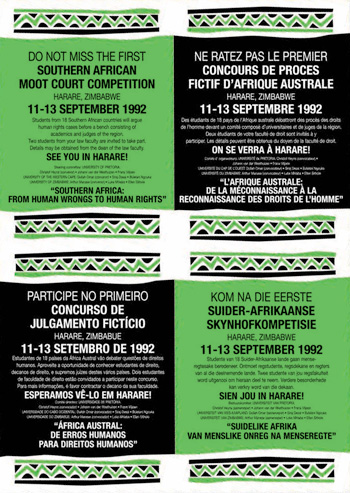 The first African Human Rights Moot Court Competition was held in Harare on 11 to 13 September 1992. Law teachers and students from 29 universities in African countries south of the equator participated as well as the chief justices, or their representatives, of nine of these countries. The competition was held in the Harare International Conference Centre. The event was sponsored by the Centre for Human Rights, University of Pretoria, the Community Law Centre, University of the Western Cape, and the Law Faculty, University of Zimbabwe. The theme of the competition was Southern Africa: From human wrongs to human rights.

The Secretary-General of the Organisation of African Unity, HE Dr Salim Ahmed Salim, formally opened the proceedings. He described the event as “an important and unique contribution” towards ensuring that the people of Africa, “independent of the pigment of their skin, do fully enjoy human rights”, and welcomed the “cross-fertilisation of ideas”.

Teams of two students (mostly one male, one female) from each of the universities argued two human rights cases before a hypothetical, future Southern African Court of Human Rights. The fi rst case dealt with the question how governments should treat AIDS victims; the second with the place to be awarded to racist and secessionist political parties in African democracies. The basic charters of the court were the Universal Declaration on Human Rights and the African Charter on Human and Peoples’ Rights. In the preliminary rounds panels of law deans tried the cases. The fi nal round was adjudicated by the nine chief justices or their representatives.

The following ranks were awarded:

The competition was covered by the news media of a number of countries, including newspapers in South Africa, Zimbabwe and Mauritius. Numerous student publications in all the participating countries covered the story. A programme of the meeting was also screened on prime time television in South Africa, on the programme Agenda, and an interview was held with the winning team on Breakfast TV.

By all accounts the competition was a great success. All the teams, deans and judges who were expected to participate did attend; the arguments were of a very high standard; the programme ran exceptionally smoothly, and a great deal of contact was established between the legal institutions of the region, on a formal and an informal level. Participants expressed themselves on the event in superlatives and were unanimous in the decision that it should be repeated in future. A continuation committee meeting was held on 7 November in Botswana, where it was decided that Lusaka, Zambia would be the venue for the next competition.

The winning team were invited to participate in the Giuseppe International Law Moot Court Competition, to be held in Washington DC, USA, in March and April 1993. A videocassette of the proceedings, as well as the footage shown on television is available. A book with photographs and the speeches as well as the judgements in the cases are also available.

1. It is the year 1994. A Southern African Court of Human Rights has been constituted. Issues argued before this court are decided on the basis of the African Charter on Human and Peoples’ Rights and the Universal Declaration on Human Rights. Country Zizania forms part of this system.

2. One Adam Makanda was employed as a schoolteacher by the Department of Education in Zizania. He was employed in 1980. In June 1992, he tested positive for the presence of HIV. He has himself retested to confi rm the test result. This information was refl ected on his medical scheme statement, and came to his employer’s attention when the employer requested particulars of payments made by Adam Makanda’s medical scheme. The information on Adam Makanda’s medical aid statement indicated that he had been tested twice and not what the results to the tests had been. On 1 November 1992 the head of Makanda’s department learnt about the fact of his double testing. He consulted colleagues and decided to confront Makanda. On 3 November 1992, after his employer had confronted him, Makanda admitted his HIV positive status and the fact that he had concealed it with his employer since June 1992. He was given an opportunity to state his case to his employer. On 4 November 1992 Makanda was told that he is retrenched; the department was undergoing a reduction of personnel due to fi nancial problems. He was allowed to collect his personal belongings on 5 November 1992 and told not to return thereafter. He was paid his full salary for November 1992.

3. Thereafter Adam Makanda’s health gradually deteriorated until he developed the symptoms related to ARC in January 1993. At that stage he had to sell his house and almost all his possessions. He still could not afford any expensive treatments (such as AZT and DDI). He started to stay with various relatives, for short periods of time, moving around the country. They nursed him for the various symptoms he developed, but ultimately abandoned him and left him on the street.

4. Restoring Human Rights in Zizania, ROHRIZ, a newly formed human rights activist group in Zizania, learnt about the case. Adam Makanda complained to ROHRIZ about the following: his privacy was invaded by his employer obtaining confi dential information on his state of health, he was unfairly dismissed, he has a right to the medical care he requires and he has a right to a house, or at list some form of shelter.

3. Prior to 1993 Tranquility was governed by a military regime dominated by the people from the southern region known as the Kuks. Though a minority in Tranquility, the Kuks have traditionally held enormous economic power. The southern region is particularly rich because of the huge deposits of oil and natural gas found there. Kuks also own large tracks of land in other parts of Tranquility. Non-Kuks have a serious shortage of land. The Kuks, however, had run a despotic administration which trampled other people’s basic rights and this led to a civil war culminating in the ousting of the Kuks’ regime and the holding of the 1993 United Nations sponsored elections under a new constitution. 4. The Forum for the Restoration of Kuks Supremacy (FORKS) is a southern-based party, which participated in the 1993 elections. This party campaigned on the platform that Kuks were the natural leaders of Tranquility and they had a divine right to rule. Only Kuks from the southern regions could be members of this party. The party leader Henry Fenn actually declared at one of the rallies that in the event of the FORKS losing the elections then the southern region would secede and establish a Kuks stat where only Kuks would be citizens; thereby denying the rest of Tranquility the natural wealth of the south. FORKS, however, won only thirteen southern region constituencies and hence constituted a relatively small minority in the 100 seats in Parliament.

5. A week after elections, the FORKS called a huge demonstration in the Centre of Rak, the capital of the southern region. Addressing about 10 000 Kuks Henry Fenn said Tranquility belonged to the Kuks and no one else. He said people of other races and tribes were born to be servants of the Kuks. He said that unless the TMDT government handed over power to him within a week the Kuks would deny the rest of the country the riches of the southern province.

6. When news of what Henry Fenn had said was broadcast there were peaceful demonstrations in other regions of the country. A forum for the acquisition of Kuk land was also formed in other regions with the aim of pressing for a law which would enable the authorities to compulsorily acquire the vast tracks of land held by the Kuks on the basis that the land being outside the southern province did not traditionally belong to the Kuks but had been robbed from the indigenous people of those regions.

7. A law was hastily drafted and it went through parliament giving the executive such powers. The relevant part of the Land Redistribution Act reads as follows: “Tranquility shall have economic justice and to that end all land owned by Kuks which is outside the southern province shall be acquired by the state in order to facilitate indigenous settlement.” The FORKS fi led papers with the Supreme Court challenging the legality of this law. In the meantime Henry Fenn was arrested, allegedly for having made a racist speech and the government issued a ban on the operation of FORKS. FORKS is challenging both actions in the same court and is demanding the right for the southern province to secede from Tranquility.

8. FORKS (and Henry Fenn) lodged constitutional complaints to the Supreme Court in Tranquility, on the following 4 grounds:

9. The Supreme Court in Tranquility rejected theses complaints. FORKS (and Henry Fenn) now make an application to the Southern African Court on Human and Peoples’ Rights. You appear for the applicants (FORKS and Henry Fenn) / respondent (Government of Tranquility). Argue the case.

Tranquility is signatory of the 1966 International Covenants. The African Charter on Human and Peoples’ Rights forms an integral part of the written constitution of Tranquility.

Compensation for expropriation is payable in the discretion of the responsible governmental ministry. Assume that there is no specifi c statute in Tranquility’s municipal law declaring racism to be a criminal offence.