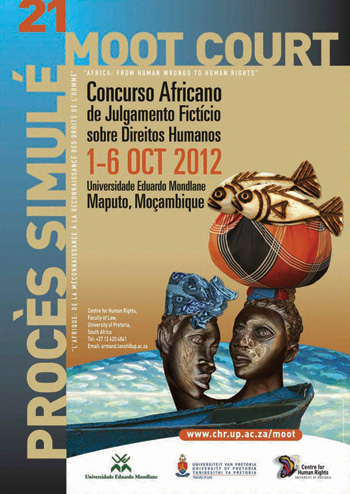 The 21st African Human Rights Moot Court Competition will be held at the Universidade Eduardo Mondlane of Maputo, Mozambique from 1-6 October 2012.

Students, academics and judges from all over Africa were invited to participate.

The African Human Rights Moot Court Competition has become the largest annual gathering on the continent of students and lecturers of law. Established in 1992, 1028 teams from 139 universities, representing 48 African countries, have over the last 20 years participated in this premier event on the university and human rights calendar of the continent.

The 21st African Human Rights Moot Court Competition will be held at the Universidade Eduardo Mondlane (UEM) of Maputo, Mozambique from 1 to 6 October 2012. All law faculties in Africa are invited to attend. The registration forms are available on the Centre for Human Rights website (www.chr.up.ac.za).

This is the second time UEM is hosting the competition and the first time in the history of the Moot that a University is hosting the event for the second time after a memorable first Moot in 1998. The UEM Moot Team is a highly dedicated team which is expecting all participants to present a very unique and special event which marks 21 years of existence of the Competition.

CALL FOR PAPERS: CONFERENCE ON INTERNATIONAL LAW IN AFRICA
5 & 6 October 2012

Please note: The email address to use when sending abstract is: roland.adjovi@gmail.com

BACKGROUND AND AIM OF THE CONFERENCE

In anticipation of the 50th anniversary of the creation of the Organisation of African Unity (OAU) in 2013:

This conference aims to provide a forum for reflection on the pan-African organisation in the specific context of human security, peace and development in Africa, and how the OAU/AU has responded to challenges in these areas.

THEMES OF THE CONFERENCE

Threats to Human Security by State and Non-State Actors

Towards 50 Years of African Unity (Morning)

On the afternoon of 6 October 2012, conference participants are invited to attend the final round of the 21st African Human Rights Moot Court Competition, in the main auditorium of the Joachim Chissano Conference Centre in Maputo. The Moot Competition, which is the leading human rights education initiative at university level in Africa, brings together students and academics from over 60 African universities each year to argue and debate contemporary human rights issues. The final round opposes the best teams and is presided over by leading international jurists including judges from the African Court on Human and Peoples’ Rights, the International Court of Justice, the International Criminal Court, the Constitutional Court of South Africa and the Chief Justice of
Mozambique; as well as other experts from academia and civil society.