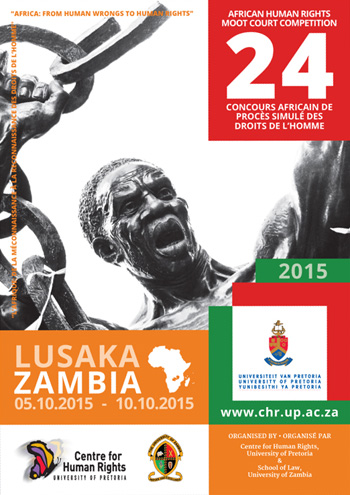 The African Human Rights Moot Court Competition is the largest gathering of students, academics and judges around the theme of human rights in Africa. This annual event brings together all law faculties in Africa, whose top students argue a hypothetical human rights case as if they were before the African Court on Human and Peoples’ Rights. The Competition aims to prepare a new generation of lawyers to argue cases of alleged human rights violations before the African Court. Since its creation in 1992, the Moot Court Competition has brought together 142 universities from 49 African countries, and spawning the establishment of the leading programmes in the field of human rights teaching and research in Africa. In 2015, the 24th edition of the Moot Court Competition was co-organised by and hosted at the School of Law, University of Zambia, bringing together 183 participants in 61 teams from 20 African countries. In 2015, the themes explored at the Moot Competition include business and human rights, academic freedom, freedom of expression, child marriage and the rights of sexual minorities in Africa. One of the highlights of this year’s Moot was the presence of independence President Kenneth Kaunda who, at 91, breathed life and spirit into the passion and commitment of the future African human rights advocates.

Every year, all faculties of law in Africa are invited to send a team of two students – preferably one man and one woman – as well as their lecturer in human rights or international law, to participate in the African Human Rights Moot Court Competition. Teams argue a hypothetical human rights case as if they are before the African Court on Human and Peoples’ Rights. This six-day event also includes a one-day international conference and sees the participation of students, academics, judges and experts from all over Africa and the world.

Over the past 24 years, the Moot Competition has become the largest annual gathering of students and lecturers of law on the continent. Established in 1992, 1132 teams from 142 universities, representing 49 African countries, have over the last 24 years participated in this premier event on the university and human rights calendar in Africa. The Moot has become a permanent fixture on the calendar of many African Universities and students compete fiercely to be selected as ambassadors of their university and country.

The Moot was co-organised by and hosted at the University of Zambia which, having hosted the second edition of the Moot Competition in 1993, became only the second African university to host the event twice in 24 years. This year, the event brought together 61 teams from 20 African countries, including for the first time:

Students and lecturers undertook registration formalities at the Mika Centre on 5 October, where they submitted their memorials (written heads of argument) and received the leading publications on human rights in Africa published by the Pretoria University Law Press (PULP) as well as branded T-shirts, bags, and water bottles.

The opening ceremony was held at Government Complex, in Lusaka city centre. Mr. Norman Taku, Assistant Director of the Centre for Human Rights welcomed all participants and guests. He encouraged Moot participants to take full advantage of the Moot Competition and the opportunities it creates for personal growth, urging them to be persistent and determined in working for a better Africa and a fairer world. Mr Taku dedicated the 24th African Human Rights Moot Court Competition to Professor Michelo Hansungule in recognition of a life lived for human rights education, youth development and panafricanism.

The keynote address was delivered by Dr Ngosa Simbyakula, Honourable Minister of Justice, representing His Excellency President Edgar Lungu. Dr Simbyakula reminisced about the Moot Competition in 1993 when he was Dean of the School of Law before reading a moving and uplifting message from President Lungu.

Held on 6 and 7 October at the School of Engineering, the preliminary rounds involved all participating teams arguing the hypothetical case four times: twice as Applicant and twice as Respondent. The rounds are held separately in English, French and Portuguese and panels of judges made up of law lecturers (faculty representatives) award scores based on the following criteria:

The results of the preliminary rounds were announced at Chicago's Lounge where, in accordance with the rules of the Competition, four teams proceeded to the Final round: two English-speaking, 1 French-speaking and 1 Portuguese-speaking. To celebrate African diversity and promote good sportsmanship, no two teams from the same country may be in the final.

The following qualified for the final round:

Thus the important lesson of learning to bridge the artificial colonial divide of language and legal tradition is imparted. The young human rights defenders are challenged to work together to prepare new, combined arguments for the final round.

On 8 October, Moot participants visited Chilenje House museum, the home of independence President Dr Kenneth Kaunda and his family from 1960 to 1962. It was from this house that Dr Kaunda directed the struggle for the independence of Zambia, which was achieved on 24 December 1964. He became Zambia's first President and laid the foundations for a great nation, which has never witnessed a military coup or civil war.

Walking through the apartments at Chilenje House put the students in the life of Dr Kaunda’s family fifty years ago: the furniture and personal effects used by the the Kaunda family and the displays illustrating the history and evolution of Zambia since colonial times had been carefully preserved for the enjoyment and inspiration of a new generation of young Africans.

An important component of the Moot week is the one-day human rights conference. Organised in partnership with the Office of the High Commissioner on Human Rights (OHCHR) in Zambia on 9 October the conference covered two themes: child marriage and sexual minority rights in Africa.

The conference was opened by Prof Nkundu Luo, Zambia's Minister of Gender and Child Development. Both sessions brought together academics, policy makers and law-makers from all over the continent. The following papers were delivered at the conference:

Part I: Children, Not Wives: Ending the Scourge of Child Marriage in Africa

Part II: Leaving no one Behind: Protection from Discrimination based on real or imputed Sexual Orientation and Gender Identity

The Moot final was held at Mulungushi International Conference Centre, the same venue where it was held in 1993. The following eminent personalities served as judges:

As the ultimate tour de force of the Moot Competition, students in the final displayed a high level of knowledge and skills, displayed great dexterity in answering judges’ questions, dodged their traps and even challenged some of the judges in return.

Judges recessed in order to deliberate and, on their return, offered advice and observations to the students. They mentioned how impressed they were by the high quality of the arguments, the depth of research and the interesting arguments put forward.

The results of the Moot Competition are verified by an independent auditor, Mr Edouard Jacot Guillarmod, Chartered Accountant and partner for 21 years at PriceWaterhouseCoopers. The following results are a summary of the top achievers. The full results are available on the website of the Centre for Human Rights: www.chr.up.ac.za

In an interesting twist, all teams in the 2015 final were also in the 2014 final in Nairobi. Furthermore, the same universities won in both years.

As the curtains fell on an incredible week, moot participants were treated to a grand closing dinner at the Radisson Blu Hotel in Lusaka.

As he gracefully entered the auditorium, everywhere spontaneously erupted in an emotional standing ovation. President Kaunda danced and sang one of his own compositions in the fight against HIV/AIDS in Africa:

Despite the weight of his age, he posed for photographs with every country delegation at the Moot competition, shaking each participant’s hand and imparting individual blessings. The Centre for Human Rights, on behalf of the Moot participants, presented President Kaunda with the gift of a special cane for his collection.

The success of the Moot depends to a great extent on the role of the host university. In 2014, the University of Zambia performed exceptionally well in this role. This was due, in no small part, to the institutional support of the University of Zambia: from the Vice-Chancellor, through the Dean of the School of Law, to the dedicated team of student volunteers.

The entire effort was organized and expertly held together by Dr Lungowe Matakala, whose personal story is a record in itself. As a young law student at the University of Pretoria, Dr Matakala participated in the 2000 Moot Competition in Ghana, where she won the prize of best oralist. In 1999, she participated in the Philip C. Jessup Moot Competition in Washington DC, where her team went to the finals and finished Runners-up. She became a lecturer immediately after completing her LLM degree, in which capacity she coached the University of Pretoria team, which won prizes for the best memorials, best oralist and overall winner in the final at the 2004 Moot Competition. Similarly in 2013, she coached the University of Zambia team which scooped all the prizes in the first Southern Africa Disability Rights Moot Court Competition. Dr Matakala completed the prestigious LLM in Human Rights and Democratisation in Africa at the Centre for Human Rights, University of Pretoria; and a PhD at Kings College, University of Cambridge. She teaches at the School of Law, University of Zambia, where she also serves as the Assistant Dean in charge of Postgraduate studies. In 2015, she brought the wheel full circle by organising and hosting the Moot Competition with excellence and Ubuntu, the hallmarks of a true African human rights advocate. She led the School of Law to winning the Gill Jacot Guillarmod Award, and her personal effort was singled out in the Award.

Commemorative activities will culminate at the seat of the African Commission in Banjul, The Gambia, with the simultaneous holding of:

In realising its dual mandate, the African Commission has worked in close and productive collaboration with the Centre for Human Rights, University of Pretoria, which also celebrates two significant milestones in 2016:

To mark the shared history of the African Commission and the Centre for Human Rights, the two institutions will co-organise the 25th African Human Rights Moot Court Competition in Banjul, The Gambia, in October 2016.

It will be the first time that the African Commission, Court and Children’s Committee hold their sessions in the same place at the same time. The Moot Competition, will be a common denominator to these events, opening up singular possibilities for cross-participation and a rich experience for everyone involved, and leading up to a shared event by all 4 institutions on 21 October 2016 – Africa Human Rights Day.