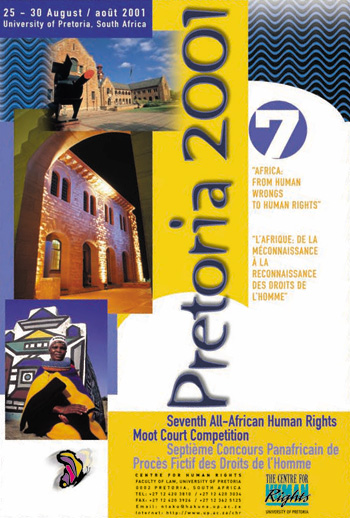 In total 52 universities attended this year’s Moot Court Competition. A faculty representative and two students represented each university. The number of participating universities would have been higher had it not been for the visa requirements and the travel arrangements which some of the teams left for the last minute and as a result they could not travel to Pretoria.

The registration took place at Hotel 224 in Pretoria. This took place in the morning and afternoon of Saturday 25 August 2001. After registration the participants were taken to the University of Pretoria where a group photograph was taken and thereafter all the participants proceeded to the opening ceremony. The opening ceremony took place at the Sanlam Conference Centre. Among the speakers at the opening ceremony were: Prof June Sinclair (Vice Principal, University of Pretoria) Judge Tole Madala (South African Constitutional Court) and Prof Christof Heyns (Director, Centre for Human Rights).

A one-day course on ‘The International Protection of Human Rights’ was held at the university. This was compulsory for all students and it was well attended. The following courses were presented on this day:

During the one-day course, the Centre for Human Rights made a PowerPoint display of the Computer Based Training programme which will be launched soon and will provide information on human rights. The alumnae of the Moot Court Competition launched an alumnae association where they invited all the participating students to join. This association is intent on creating a network of human rights lawyers and also with helping at the Moot in the future.

On Wednesday 29 August there was a one-day excursion. The participants were taken on a tour of Soweto. They toured the symbolic places in Soweto that included Nelson Mandela’s home and the Hector Petersen Memorial.

The fi nal round was held at the Human Science Research Council, Pretoria. The teams in the fi nal round were the top two Anglophone universities and the top two Francophone universities. These had emerged during the preliminary rounds. One Anglophone team was combined with a Francophone team to form the applicants and the same was done to form the respondent team. The determination of whether the fi nalists argued as applicant or as respondent was determined by a draw of lots.

The judges in the fi nal round were:

The winners of the competition were the applicants.

The Moot was a major success. Many people helped in making this Moot Court Competition a success. Of the 52 universities that participated, 12 were French-speaking universities. Given the fact that some of teams went through some diffi culties in obtaining their visas and arranging their travel in general, the turn out was satisfying for the organisers.

Senatania is a West African state that gained independence in 1965. It has a population of about 10 million, which consists mainly of two different groups – the Se and the Na. The Se live predominantly in the south of the country. They are fair-skinned, mainly speak Arabic and follow the Islamic religion. The Se form about 65% of the population. The Na live predominantly in the north of the country, where they make a living from agriculture. They are Na-speaking black Africans, many of whom have converted to Christianity. The Na make up about 35% of Senatania’s population.

2. Senatania is a member of the UN and OAU. It has become a state party to the following international human rights instruments:

Interpretative declaration to instrument of ratification:

Senatania will adopt interpretations of the Convention that are consistent with Islamic law. As a member of the UN, it voted in favour of the Declaration on the Human Rights of Individuals who are not nationals of the country in which they live (G.A Resolution 217A (III)).

3. The Senatanian legal system is based on the French legal system. Its Constitution provides for an executive president, elected by direct vote, and a national assembly. The Constitution, in its Preamble, states the following: The people of Senatania proclaim its commitment to the Universal Declaration of Human Rights, the French Declaration of the Rights of Man and the Citizen and the African Charter on Human and Peoples’ Rights. In addition, chapter 1 of the Constitution, entitled “Bill of Rights”, contains almost word for word, the civil and political rights in the International Covenant on Civil and Political Rights.

4. The northern neighbour of Senatania is Axom, a state mainly inhabited by Na people. Axom is a landlocked country and has suffered from a long period of drought in the late 1980s. As a result, many of its nationals left Axom to settle in the north of Senatania. Northern Senatania was prospering in that period. About 250 000 Axom nationals settled there. Over the following years, they participated actively in agriculture in northern Senatania. Many of them also started small businesses, bought property in the main town of the north, Nanania, and acquired shares in fl edgling co-operative societies.

5. During the late 1990s a severe drought started affecting Northern Senatania. This led to a decline in agricultural produce of Senatania as a whole. The effect of the famine was compounded by the increasing incidence of AIDS deaths in the region.

6. In January 2000, for the fi rst time, a survey of the incidence of HIV among pregnant mothers was done throughout Senatania. The resulting statistics revealed that of the fi ve regions of the country, the northern region had by far the highest rate of infection (23% of pregnant mothers tested positive in the north, compared to the second highest, 17% in the south, 15% in the central region, and fi gures below 9% in the other two regions (east and west)).

7. As a result, the President of Senatania, Dr Abdulai El Mobasher, ordered an urgent cabinet meeting. The cabinet decided to take urgent action. The Minister of Interior Affairs was mandated to expel all HIV positive non-Senatanian nationals who lived in the north, as they were believed to be the cause of the disproportionate rate of HIV infection in the northern region.

8. On 1 February 2000, police started arresting people without valid Senatanian nationality documentation. Once detained, these people were given a choice: either to be expelled to Axom, or to undergo an HIV test. If the test proved HIV positive, they would also be expelled.

10. Those who were expelled (either because they wanted to return, or because of the result of the HIV test) were allowed to return to their places of residence in Senatania to collect their most important belongings. They remained under police surveillance during this time. On their return to prison, they were allowed to draft a “designation”, in terms of which they had to appoint someone to take full responsibility of their affairs with the ability to use or sell any remaining property in Senatania.

11. By March 2000, the government of Senatania had erected an electrifi ed fence between the two countries.

12. During its April 2000 session, the Senatanian parliament adopted a law to address the problem further. The law, the Restoration of Morality Act 5 of 2000, provides as follows:

Article 2
It is an offence for anyone to engage in any acts of sexual intercourse with another person to whom he or she is not married.

Article 5
The provisions of this Act apply to all actions performed on the territory of Senatania, notwithstanding the nationality of the person who performs the action.

13. A voluntary association, called the Nanians for Equality Rights (NAFER), contacted a lawyer to make an application to the Senatanian highest court, the Supreme Court. A few days later, the head offi ce of NAFER was set alight. When a member of NAFER’s executive went to the lawyer again the next day, he admitted that the State Security Bureau had contacted him, that he gave them information about NAFER and that he refused to be involved in any legal action involving NAFER.

14. NAFER then fi led a communication with the African Commission on Human and Peoples’ Rights. On 2 June 2000 the Commission admitted the communication, and simultaneously found violations pertaining to the following aspects:

15. The African Commission decided to refer the case to the African Court for its decision.

16. Prepare heads of argument and argue the case for the applicant (NAFER) and the respondent (Senatania).