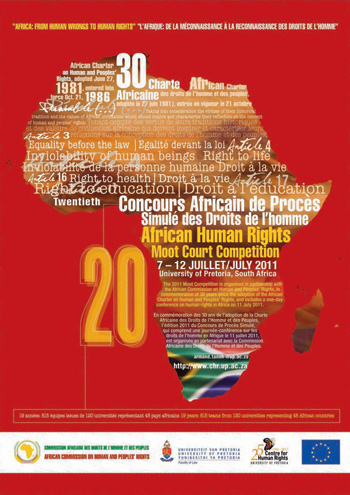 The 20th African Human Rights Moot Court Competition was held at the University of Pretoria, South Africa from 7-12 July 2011.

Students, academics and judges from all over Africa were invited to participate.

The African Human Rights Moot Court Competition has become the largest annual gathering on the continent of students and lecturers of law. Established in 1992, 975 teams from 129 universities, representing 48 African countries, have over the last 19 years participated in this premier event on the university and human rights calendar of the continent.

In 2011, the Moot Court Competition will be hosted at the University of Pretoria, in South Africa. Some 80 African universities are expected to send teams to participate. Prominent African and international jurists will serve as judges in the final round. Students and lecturers will also attend a one-day training workshop on human rights in Africa.

The African Human Rights Moot Court Competition is unique in giving the youngest and the brightest future African lawyers the opportunity to critically examine the human rights situation on the continent, with a view to improving it through the use of the persuasive tactics of logical legal argument based on the African Charter on Human and Peoples' Rights.