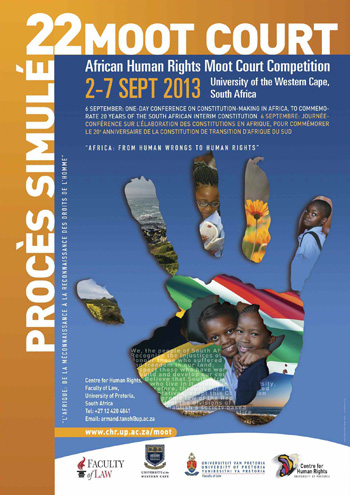 The 22nd African Human Rights Moot Court Competition will be held at the University of the Western Cape, South Africa from 2-7 September 2013

Students, academics and judges from all over Africa are invited to participate.

The African Human Rights Moot Court Competition has become the largest annual gathering on the continent of students and lecturers of law. Established in 1992, 1093 teams from 139 universities, representing 48 African countries, have over the last 20 years participated in this premier event on the university and human rights calendar of the continent.

In 2012, the Moot Court Competition was held at the Universidade Eduardo Mondlane of Maputo, Moçambique. Some 65 African universities attended.

The 22nd African Human Rights Moot Court Competition will be held at the University of Western Cape from 2 to 7 September 2013. All law faculties in Africa are invited to attend. Online registration will open soon on the Centre’s website (www.chr.up.ac.za/moot).

This is the first time that the Moot is being held by a university located in the mother city of South Africa. Cape Town has a great and long history and is a city with many historical sites and natural wonders. The organisers look forward to welcoming all the teams in South Africa. See you then!

The 22nd African Human Rights Moot Court Competition will be held at the University of the Western Cape, South Africa from 2-7 September 2013

Please note:
The email address to use when sending abstract is: dlgordon@uwc.ac.za

The Multi-Level Government Initiative and the Socio-Economic Rights Project of the Community Law Centre (University of the Western Cape), together with the South African Research Chair on Multi-Level Government, Law & Policy are pleased to announce a conference on “Constitution-making in Africa”.

The conference aims to provide a platform for the critical engagement with current and past constitution-making processes on the continent, drawing on the comparative experience of academics and practitioners.

Themes
The conference will commence with a plenary session, in which key participants to the South African Constitution-making process will reflect on the transition from apartheid rule to democratic rule. The remainder of the conference will revolve around four themes:

Process
Abstracts are invited on the above four themes. The abstract must contain a name, proposed title and a brief summary in no more than 500 words. If you are a participant in the African Human Rights Moot Court Competition, please indicate this on your abstract. Abstracts should be sent to dlgordon@uwc.ac.za on or before 17 May 2013. Decisions with regard to the selection of abstracts will be communicated by 31 May 2013.

A full paper must be submitted by 30 August 2013, using the prescribed referencing style, and be presented at the Conference. Papers will be published as drafts on a dedicated website beforehand. Presenters may be required to rework their papers after the Conference, and resubmit final versions for inclusion in a publication.