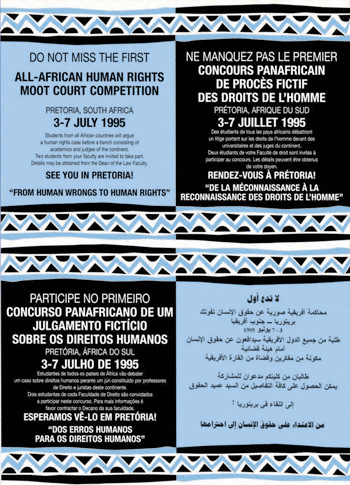 The Fourth African Human Rights Moot Court Competition took place at the University of Pretoria on 3-7 July 1995. A total of 48 law faculties from 28 African countries participated. The competition was formally opened during a reception in the Pretoria City Hall by the Deputy President of the African Commission on Human and Peoples’ Rights, Dr Hatem Ben Salem. On the fi rst day a one-day seminar on the international protection of human rights was presented to all participants by the following lecturers:

Before the competition a compilation of approximately 600 pages of “Background Material” in English or in French, was distributed to each participant. This pile of material contained all the international instruments applicable to the problem that was to be argued as well as academic articles and extracts from books which could help to level the playing fi elds between the different faculties. Material for this compilation was supplied by the International Commission of Jurists, Amnesty International, and the International Institute for Human Rights Law in Strasbourg, France.

During the next two days the students argued the hypothetical problem posed for the competition, before the deans of the respective law faculties. Based on the scores awarded during these preliminary rounds, the four best teams were selected to go through to the fi nal round, to be held on the last day.

The teams from the Universities of Ghana and Pretoria were then combined into a new team, and the teams from Makerere and Rand Afrikaans Universities into another new team. They argued the same problem in the fi nal round before justices from the highest courts of 6 African countries, sitting as a hypothetical African Court of Human Rights. The team from Makerere and Rand Afrikaans University were eventually declared the winners.

At the prize-giving ceremony on the last evening the South African Minister of Justice, Mr Dullah Omar, delivered the address.

The team members of the ten best universities received human rights book prizes and the four members of the combined winning team will be given the opportunity to attend the course on international human rights law in Strasbourg, France, or serve an appropriate internship at human rights organisations in Africa. Negotiations were undertaken to arrange short internships with large law fi rms in other African countries for as many students who participated in the Moot as possible.

The jurisdiction of the Court extends to all cases concerning the interpretation and application of Part I of the African Charter on Human and Peoples’ Rights (the Charter). Cases can be brought before the court either by a state party to the Convention or after petition to it by the African Commission on Human and Peoples’ Rights. Any person or non-governmental organisation or group of individuals claiming to be the victim of a violation of the rights set forth in the Charter by one of the States parties to the Convention may petition to the Commission. The Court may only deal with a case after all domestic remedies have been exhausted. The Convention further stipulates that in interpreting the Charter, the Court must have regard to public international law involving the rights contained in the Charter.

2. States Equatoria and Capricornia are both parties to the Convention and have as such accepted the compulsory jurisdiction of the Court. Both states are members of the United Nations and have signed and ratifi ed the four Geneva Conventions of 1949 and both the 1977 Protocols to the Conventions. Equatoria and Capricornia have, in addition, acceded to the 1968 Convention on the Non-applicability of Statutory Limitations of War crimes and Crimes against Humanity.

The following case have been referred to the Inter-African Court by the Commission:

3. After years of general confl ict a general election took place in Equatoria under the supervision of the Organisation of African Unity on 2 February 1994. The election was contested by only two parties: The Equatoria Nationalist Party (ENP), which held a majority in the Equatorian legislative Assembly prior to the election, and the Freedom Movement of Equatoria (FME), a well organised resistance movement with a strong support base amongst the Pani people, the smaller of the two major ethnic groupings in Equatoria. (The largest part of the Pani people lives in neighbouring Capricornia). The ENP won the lection by securing 73% of the total vote.

4. The FME immediately after election announced that they would not accept the result of the election and requested the Election Monitoring Commission to declare the election void, due to widespread irregularities. When the Commission refused to do so, the tension between supporters of the ENP and FME erupted into widespread rioting in all the major metropolitan areas of Equatoria. The government of Equatoria immediately steeped in to suppress the riots and deployed the Equatorian Defence Force for this purpose. During a week of bloodshed a number of FME supporters were killed by government troops. Amongst these was the leader of the FME’s Youth Brigade, Albert Manase.

5. Instead of quelling the political unrest the response of the government added fuel to the fi re and the unrest rapidly spread from the urban centres to the countryside. The FME decided to exploit the volatile situation and mobilized their supporters for an armed struggle against the government.

Within a week the FME had managed to set up a command structure and a training camp in the mountainous area of the Paniki province, the traditional home of the Pani people in Equatoria. Soon afterwards they started enlisting members of the local population into their cadres. Among those enlisted were women, elderly men and children, many as young as thirteen years of age. After receiving brief training the rebels were equipped with various types of fi rearms, the rebel troops blended easily with the local population.

6. With the support of the local population, mainly in the form of the supply of basic foodstuffs to the rebel camps, the uncompromising and inaccessible mountain region proved to be a secure hideout for the FME rebels. A number of successful attacks on government installations and patrols were launched from these camps. As the rebel troops strengthened their hold on the mountains and surrounding area, more bases were gradually set up. By the end of April three such bases had been established in the region. 7. As the hostilities between the government troops and the rebel cadres for control of the Paniki province intensifi ed, the local population became more and more involved in the fi ghting. When it became clear that the government troops would not be able to penetrate the rebel strongholds the government troops decided to embark on a campaign of intimidation of the civilian population. The large number of youths supporting the FME was of particular concern to the government troops.

8. On 2 May 1994, government troops under command of one captain Sihilili launched an attack on Lembo, one of the larger villages in the foothills of the Paniki Mountains. The rebel troops in Lembo at the time offered little resistance and fl ed into the mountains, leaving the inhabitants of Lembo at the mercy of captain Sihilili and his troops. Captain Sihilili captured a large number of youths working on the farmlands outside the village that provides most of Lembo’s food, and as such, has become an important source of food to the rebel soldiers. A signifi cant portion of these youths was under the age of 14 years and a few were in possession of fi rearms.

9. Captain Sihilili ordered that all the captured youths be assembled at the town square. There he ordered his men to fl og the children publicly as punishment for supporting the rebels. He also instructed his troops to burn or otherwise destroy the crops grown on the farmlands. The words “Death of all Panis” were written with a knife on the backs of two children and several children were also raped by the soldiers. It is not clear what captain Sihilili’s role was in the latter two incidents. 10. A fragile truce was reached between the ENP and the FME at the end of 1994, when both sides started running out of ammunition, due to an effective blockade imposed by the Organisation of African Unity. A government of national unity was then formed in which captain Sihilili became the new Minister of Environment and Tourism. However, a truth Commission was then set up to investigate the worst excesses of the past. The Commission sat in camera and gave indemnity to a number of people, including Minister Sihilili, who testifi ed before the Commission.

12. Stating that they were concerned about the human rights reputation of the region, the government of Capricornia decided to take action. On 3 July 1995 Sihilili was forcibly kidnapped from his offi ce in Canca, the capital of Equatoria. Five or six armed men, belonging to a special unit of the Capricornia defence force, burst into the offi ce. One of them held a gun to Sihilili’s head and told him to cooperate or he would be shot. With the assistance of the local Station Commander of the Equatorian Police Services, Minister Sihilili was taken from the offi ce to his house not far from there, tied up and made to lie on the fl oor for three hours. After the house had been extensively searched Sihilili was injected with a substance that put him to sleep and fl own to Capricornia where Capricornia officials arrested him for his alleged participation in the Lembo attack.

13. Minister Sihilili appeared before the Capricornia Supreme Court the following morning. He was charged of having committed three international crimes. The fi rst and second charges related to a cross border raid into Capricornia three years earlier, when captain Sihilili allegedly, in hot pursuit of FME cadres who had just blown up a power station, entered Capricornia and killed fi ve of the cadres there and also three Capricornian civilians. The words “Death to all Panis” were written with their blood on the ground. The second charge related to two other Capricornian civilians, killed by a booby-trap set up in the head offi ce of the “Pani Cultural Club” by Captain Sihilili and his men during the same raid. The third charge related to the events in Lembo.

In support of the fi rst charge the text of Sihilili’s confession to the Truth Commission, which was found by his captors at his home, was submitted to the court. Minister Sihilili and the members of the Truth Commission signed the confession which also contained detailed testimony with regard to the cross border raid. The second charge was substantiated by the evidence of a Capricornian citizen who saw the soldiers entering the club. In support of the third charge the video of the events at Lembo was shown.

The High Court rejected all these arguments. With the help of the Equatorian Criminal Justice Group Minister Sihilili petitioned the African Commission on Human Rights as last resort to redress the alleged violations of his basic rights. The Commission has now referred the matter to the Inter-African Court of Human Rights.

15. Prepare and argue the case for the applicant (Minister Sihilili) and the respondent (the Government of Capricornia) before this Court.